Few years ago I read an article about a prehistoric ash mound at Hallur, Haveri district. I was curious to see it but somehow I never went in search of it. Last year during our trip to Raichur district we missed seeing the ashmound near Kavital.

March 7, 2013
We had arrived early at Sanganakallu village, met up with our contact Rama Dasa and his friend Veerabhadra. Rama Dasa took us straight to Hiregudda, we clambered up the Dolerite dyke to see prehistoric petroglyphs ~ rock art. During the climb Rama Dasa pointed out to a large light grey mound and said it was an ash mound. Wow! So, finally I saw one! Rama Dasa then pointed out at two more spots near by- spots where ash mounds existed once, now they have been leveled off by locals :-(

In this picture are 3 ovals indicating the location of ash mounds. The large spot to the left marks the surviving ash-mound.

Let's zoom in a bit. The ash mound is very close to the northern base of Hiregudda. It is situated in the middle of a field owned by a farmer. 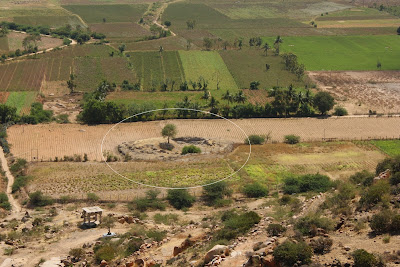 Zoomed in further. As you see, there a tree on the mound, it's a Neem tree. Part of the mound has been excavated while the rest of the mound is almost intact. 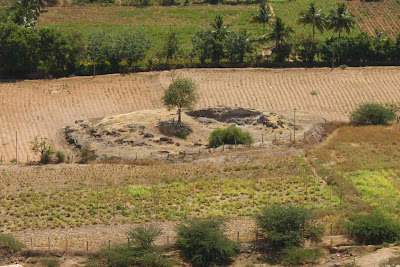 Having done the tour of Dolerite dyke we descend the hill and reach the field where the ash mound is situated. 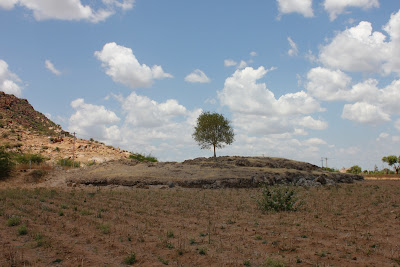 Notice the color.. very similar to the remains of burnt wood and cow-dung cakes. The outer surface of the mound is as hard as a rock and the inside is hard but powdery. We felt the ash with our fingers.. it was a great feeling to be touching a neolithic artifact. 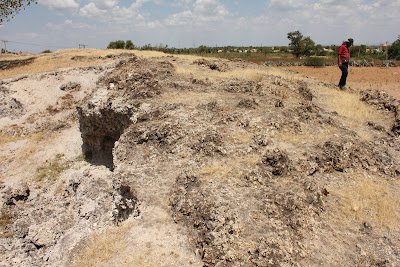 Why and how were these ash-mounds created? This ash is supposed to be the remains of excessively burnt cow-dung. It is believed that prehistoric cattle herders used to heap cow-dung and burn them as an annual ritual or cleansing process. Rama Dasa said that it is possible that fires were kept burning to keep away wild animals. Rama Dasa also explained that ash hardens when in contact with oxygen for long time. It's true. I had brought some Udi (ash) from Shirdi Sai Baba temple and it kept it in a glass bowl, several months later lumps were formed. Now I could imagine what would happen to an undisturbed massive heap of ash lying there several millenniums.. 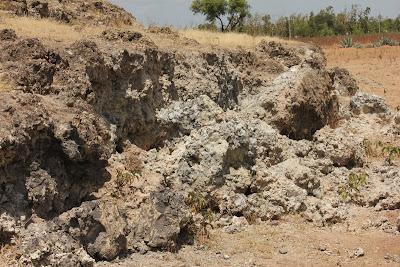 The book 'A History of Ancient and Early Medieval India' by Upinder Singh has a small article which provides some basic info about ash mounds. Here's the link to the article 'The mystery of the ash mounds'. 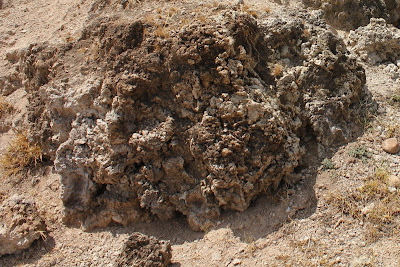 A short video of the ash mound. Sorry about the poor quality, we were tired, with the Sun blazing down Malatesh had lost attention while shooting.

Settlements with ash-mounds are-
Ashmounds not identified with settlements are at these villages/towns-
The largest ash-mound is believed to be at Kudatini in Bellary district. Kudatini is also known for its megalithic burial chambers. Kudatini is close to Torangal village on Bellary-Hospet road. We passed through Kudatini but we did not think of visiting the ash mound. Time was a constraint. Well, the day will come..