Some time between Dec 2012 and Feb 2013
This fort was discovered while scanning the area between Kudligi and Brahmagiri Betta. I think I was trying to locate Kumatgi village known for its dolmen. My eyes caught a place marked Gudekote; the word kote means fort. I zoomed into the hill next to the village.. yes, there was a fort indeed. I marked it as Gudekote fort. It was a happy moment.. cheers to another fort discovery.

March 7, 2013
Gudekote fort was the last spot for the day. It was 4-45 PM when we reached the village; we stopped at a small shop to pick up bananas, we needed energy to climb and explore; the shop-keeper gave us directions to the fort entrance. It's a small village, found the way to the fort easily. Here we are looking up at the dirt path.. the fort's entrance is out of sight, some where behind the rocks. 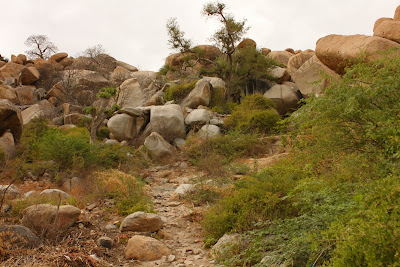 Half way up we stopped to check out a rock shelter at a distance. We could see some coloring on one of the rock faces, however the path to the shelter was blocked by thorny bushes. So, we could not confirm if that was an ancient rock art.

A 10 minutes climb, the fort gateway was in sight.. another 20+ steps to climb. To our right was another rock shelter, a natural dolmen. One of the boulders had a group of paintings depicting a battle scene; sword wielding men on foot and on horse-backs. I feel the paintings could be around 3000 years old. The shelter wasn't a large one but it was spacious enough for a small family. The fort we are about to see is relatively recent and this rock-shelter might have been used as a sentry post. That's Ravi studying figures in the painting. 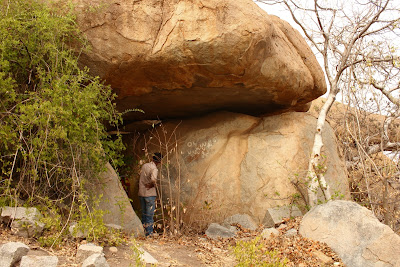 That's the entrance, Malatesh is stepping into the passage. The rock besides the green bush is the rock-shelter. 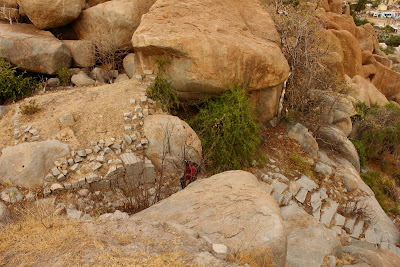 The fort entrance as seen from inside; flanked by higher ground the entrance can keep watched easily. Behind me us a big dry pit which was surely used to harvest rain water. 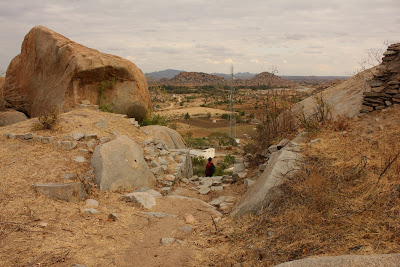 Thanks to Google Maps, we have bird's eye view of the fort here. As you see the clearing on the rock-pile-of-a-hill is a natural fort. This clearing atop a hill was a safe location for a group of people to settle. And the presence of paintings is proof that this hill was a prehistoric settlement. Hope I'm right.

There were several interesting rock formations, showing a couple of them.


The site and construction is quite similar to that of Anegundi. I guess these fortifications might be of Vijayanagara time or few centuries earlier. 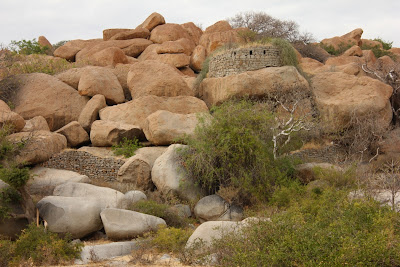 Where there's a there has to be Lord Hanuman. Jai Bajrangbali! This engraved figure of Hanuman is undoubtedly ancient but the painting is recent. I bow to the person who did the coloring, color isn't flat, good work. The bell tied to the tail indicates this was created during Vysaraya's time? 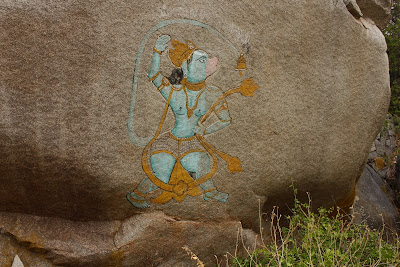 Close by was a rock with another painting on ocher, a prehistoric art. However that drawing looked incomplete.

The clearing has to levels- lower and higher levels. We are on the flight of rough-cut stone steps connecting the two levels. 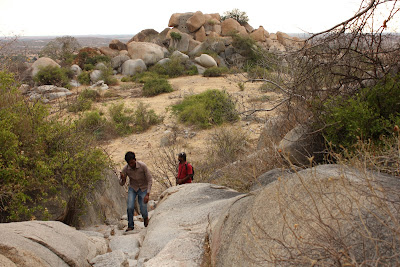 A wall and a gateway secure the higher level. Beyond the gateway is the inner fort. 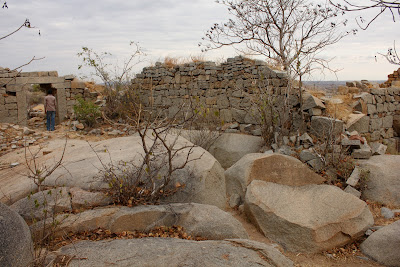 View of the inner fort from the gateway. On the left is a water tank and at the end of the path is an ancient stone, brick and mortar structure. 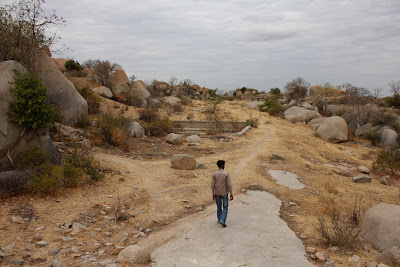 A surprise! Ravi inspects the gap between the rocks.. and its a water tank. 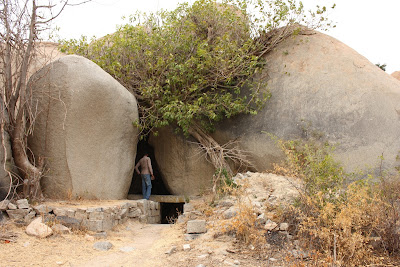 What an place to have a water tank! Sadly its dry. 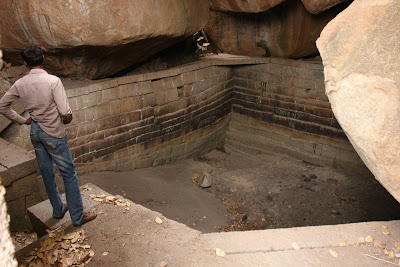 An amazing bit of engineering this is. Our ancestors knew how to blend with nature. 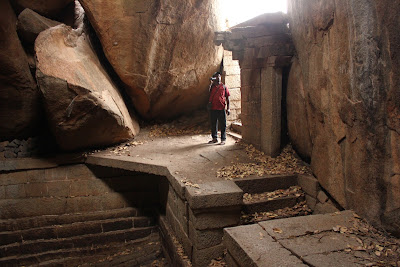 A skull rock forms a part of the wall. Signs of quarrying (see inset) indicates that stones of walls were sourced locally. Notice the small sculpture on the rock, I've not seen anything quire like it. 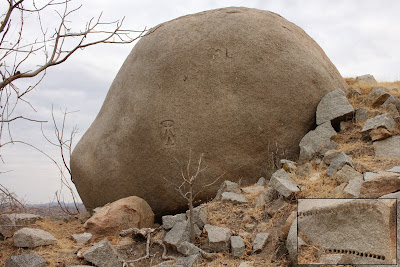 A closer look at the image; slim, body, well built limbs, spear in right hand, large head with large popping eyes and even the ears are large. The figure is enclosed in a rectangle and accompanied by a Sun and Moon. Wonder what it depicts... whatever it is, it a powerful look, an authority figure, a type who is ever alert. 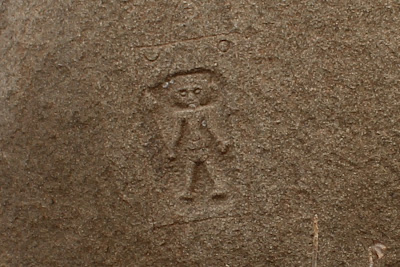 This is a recent structure, probably constructed post Vijayanagara times. It has no entrance at ground level. It might have been used to store food and ammunition. 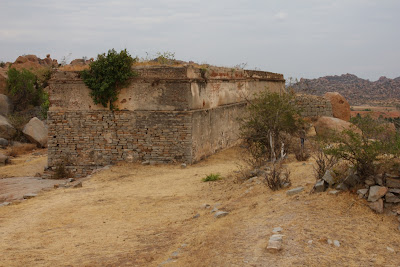 Right next to it another dry pit.. lack of rains have left all water tanks empty. Wish it rains normally in future, rains are the best blessings nature can shower of earth. What do you say? 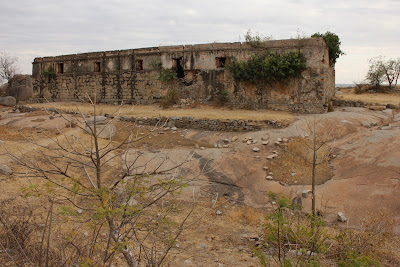 We reached the northern most tip of the fort. That small structure might have served as a sentry post for this corner. 'Twnapani Gida' is a plant which grows into a small tree in these parts. The plant is not really strong but has silvery stems. The plant produces a seed with a pair of wings (see inset); when thrown in the air, it drops down spinning fast. 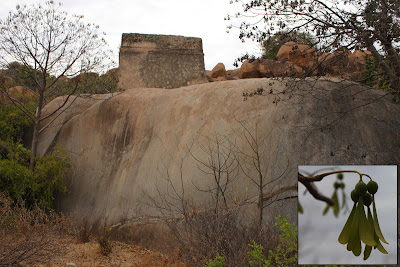 A bastion perched on rocks gives a view of the eastern slope of the hill. 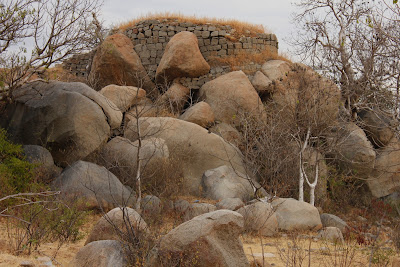 Another unique rock formation. The overhanging rock looks as though it's been stuck to the lower rock with glue. 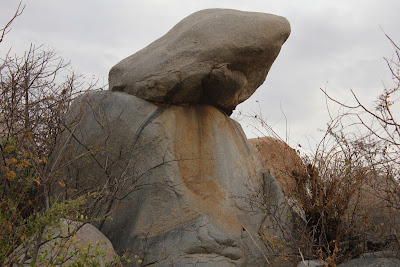 I love this fort, another fort with a prehistoric connection. There are two other rock-pile hills with similar clearings at the top; Onake Kindi near Anegundi and Watagal near Raichur - both places are confirmed prehistoric sites.

We say bye to the fort and descend the hill. In the village, on the main street is an ancient building probably built around the same time as the brick & mortar structure in the fort. By 6-45 we are on the way to Bellary, about 4 kilometers from Gudekote we stopped to freshen up and Ravi performed his ritual of washing the windshield and lighting incense sticks. As we drove on, I felt my tummy growling.. hungry! We took stock of eatables.. papdi and madaki sprouts. I felt it would be a good combination. They went well together. An idea! We filled the papdi with sprouts and had them like rolls  ..we invented a recipe on the move :)

Have passed this place few times on official work but could not check the fort may be next time........