Some time around mid 1990s
I had been to Bellary with my colleague and relative Praveen and an associate named Prasanna. Our work was at Bellary Alloy & Steel Limited, for a technical discussion about ladle weighing system (ladle is a vessel used to transport and pour out molten metals). The discussion got over sooner than expected and we were free by 2 PM. We booked return tickets to Bangalore and planned to visit the fort. It was a rainy day, the weather was quite friendly, the climb was easy. At the top, once inside the fort, we headed straight to the core of the fort. There were several structures and ponds within the enclosure. We saw several snakes in those ponds and my companions had thrown pebbles at them. Though we spent an hour at the top, we just saw the fort's overview, we did not go exploring. I was captivated by the looks of a very complex looking gateway on the western side. I wanted to climb down but then the sky darkened, we had to leave because we were not prepared for rain. On the way out, I took a slight detour from the usual route. When we regrouped at the gateway, Praveen and Prasanna had frightened looks.. a cobra with it's head raised had blocked their path for a minute! They felt their deed of chucking stones had invited the snake's wrath.. and it was Naga Panchami that day.

March 9, 2013
The last day of our 4-day trip. After a light breakfast of idli-chatni we started the climb, it was around 7-30 when we were looking up at the first gateway. 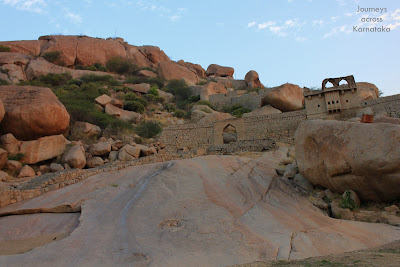 At the base of the hill is a ASI signage giving out historical information about Bellary fort:

After the fall of Vijayanagara empire in 1565 AD, Bellary region came under the rule of Hanumappa Nayaka, a local chieftan who strengthened its defence. In 1775 AD it was annexed by Haiderali and his son Tipu Sultan held it upto 1792. Haiderali built the upper and lower forts as they are now. After a short stint of Nizam rule, the fort was taken over by East India Company in 1800 AD.

The fort is located towards north-east of the town over a mass of granatoid hills at a height of 1976 feet above the mean sea level. It is around 3.5 miles in circumference. The fort roughly triangular in shape is built of cyclopean masonry in granite and set in lime mortar has a coping of brick and lime with musket holes. it has circular and semi-circular bastions at regular intervals. The lower fort has a moat about 18 feet deep and 30 to 40 feet wide. The main arched entrance leads to the open courtyard, having a couple of secular structures and temples. On the peak of the hillock are few ponds. A natural pond of irregular shape is at the foot of the hillock known as Nagalacheravu.

The rocks glowed in the soft morning light. The path is narrow, passing between rocks. Small structures like these were sentry posts. Notice the row of stone stoppers at the base of the hill. Such construction can be seen at Huthridurga and Yadgir. 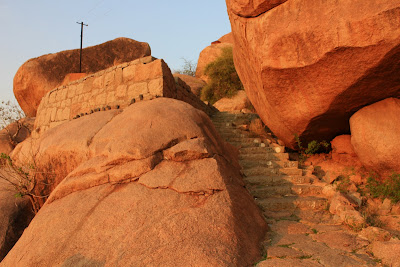 There are few underpasses too. The path has been carefully made for facilitating climbs in wet weather also. 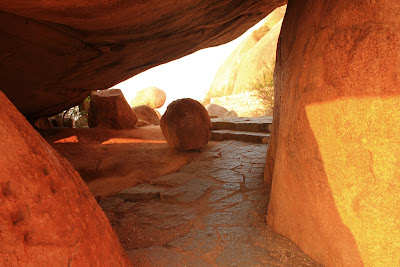 Looking up at the entrance to the upper fort. 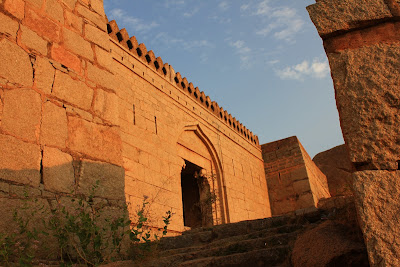 The sparsely decorated wall. In the lower half are larger blocks while the upper half is made of smaller blocks. The arch above the door frame is not so perfect, the symmetry is not quite right. The curves of the arch are not really smooth. Seems like the work was rushed through. On the walls are two or three sculptures, one of them is a image of a couple involved in sexual activity (see inset). I've heard such images were created to ward of evil eyes from the building. 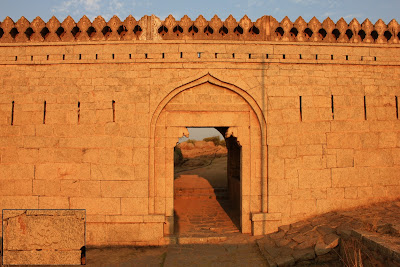 Walls and bastions on a hill that resembles a pile of boulders. The other fort built on a similar hill is at Anegundi. Just trying to imagine how it must be to build here. 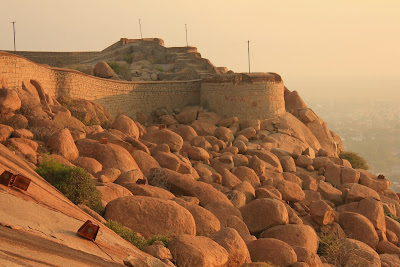 Do you notice the rusty boxes placed here and there? Those are parts of the elaborate lighting equipment which can be seen all over the fort; who knows how many lakhs of rupees have been spent on it; I'm sure it did not function at that time. This is one example of how tourism projects are handled in our state; very sad indeed.

I climbed up the gateway and I could see that it's possible to walk along the perimeter. In this picture below, we are looking towards south. 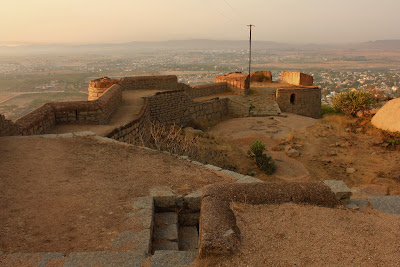 I decide to go clockwise around the perimeter. Every part of the hill is fortified sufficiently. 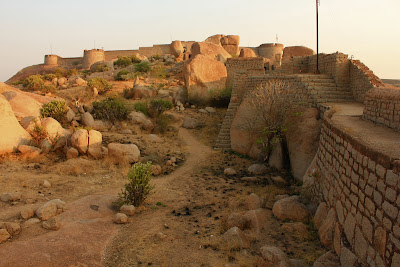 Fort area in early morning light. The coolness was quickly diminishing, it was getting warmer every minute. 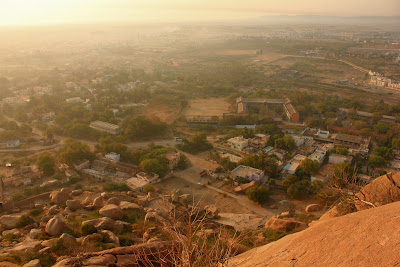 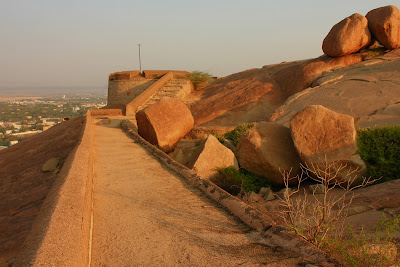 Looking back at the wall I walked some time back. In the foreground is a broken wall, bricks exposed. Notice the layers of mortar sandwiched between the bricks. Quality of design and construction was superior back then. 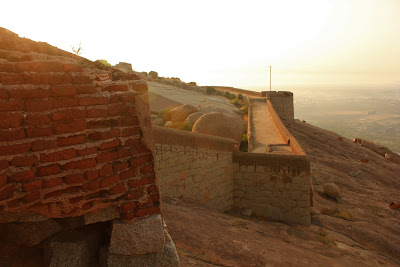 At the top is the inner fort, the core. These rocks are granite, seems like some of the raw material has been sourced of this hill. 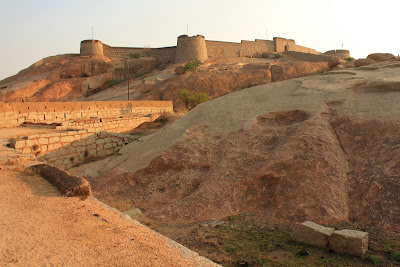 Natural depressions and pits have been utilized to capture rain water. 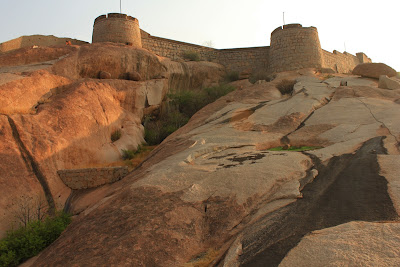 Can't help admiring builders' skill! Now, the bastion is the bottom is the spot which grabbed my attention during last visit. 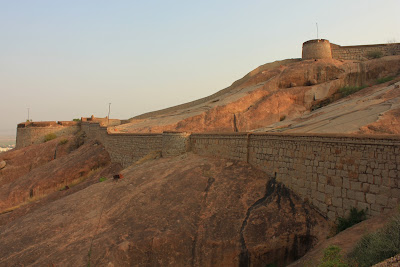 Here I am inside that wonder spot, its a security gateway with curved paths. It is designed to confuse people trying to sneak in. I wonder if armies employed dogs, they would raise an alarm just by their sense of smell; especially during nights. Notice the wall on the slope (marked E in the line diagram below)- connecting the bastion at the top to the bastion down here. The wall's height is uniform in relation with the surface right from top to bottom. 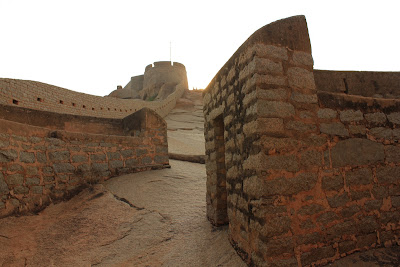 I climb up a little to get the full view of the gateway. The two curved walls add to the beauty of this spot. 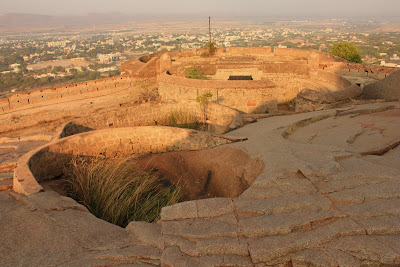 A close look at the gateway and the curved path. Its one secure place, very difficult for enemies to enter without being detected. From this bastion emerges out three wall. 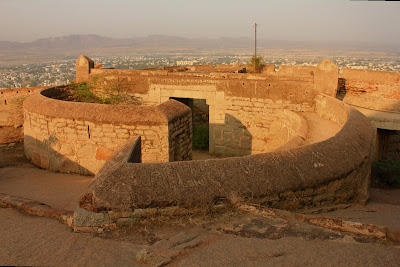 Now I'm looking at two walls and two paths. Should I go along the inner wall, a shorter walk?

Or, should I go along the outer wall, a longer walk more to descend and more to climb?
This article will continue in the following post - Bellary fort - part 2.
.........
Posted by siddeshwar at 12:30 AM