This is not a temple of Goddess Durga, but addressed so due to its vicinity to the fort (Durga). Its a Shiva temple now but originally it was Surya temple. Sources say that Durga Gudi was built by Aateda Ale Komarasingha during the days of Vikramaditya II. It is one of the examples of temple design experimentation that took place at Aihole during the late VII and early VII century CE.

The temple is apsidal in shape with its back resembling the hind part of an elephant (Gajaprishtha). Standing on a high pedestal, it has a damaged Rekhanagara Shikhara; its colonnade divides the temples into apse and aisle, and the columns pass behind the apsidal sanctum. It has a frontal mantapa with steps to reach the temple from east and west.

The temple is surrounded by a parapet and short pillars support its roof together with the inner colonnade. Its exterior has images of Shiva, Mahishamardini, various forms of Vishnu and scenes from Ramayana. The Mantapa pillars have figures of gods, goddesses and an amorous couple.


The ambulatory has several Devakoshtas with images of Shiva, Vishnu, Narasimha, Varaha, Mahishamardini and other characters. Also there windows, all unique in design.
. 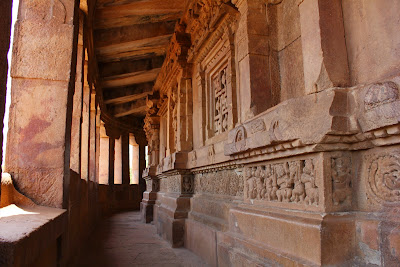