August 31, 2013
We came to Pyati to check out the ruins of a fort on the hill. About a kilometer from the hill the cave was visible (see inset). We went to the village with hopes of finding a guide to show us the cave and the fort. People were too busy to oblige; we thanked them and left. We parked our cab close to the base of the hill and had Avalakki. Our cab driver, new to us, wasn't interested in our adventure, chose to stay with his cab. Malatesh and I found a way up, the climb lasted less than fifteen minutes. 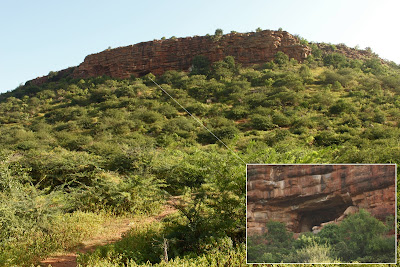 That's our cave. We were slow to enter it even though it was bright and clear. We did not want to take chances with some wild animal lunging out suddenly. 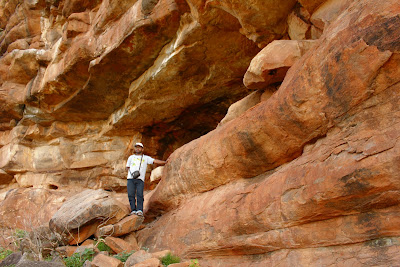 It's a small cave but sufficient for a family. Air inside the cave wasn't really fresh, we could smell rotten flesh and hide, not really strong, just tolerable. We knew the cave was definitely occupied by some canine, perhaps hyena, fox or wild cat. 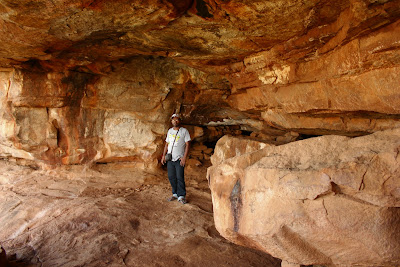 The cave's floor was rocky but covered with a layer of loose dirt. We could clearly see paw prints (see inset), they were small. Also there were bird feet prints. Then we saw two little skulls below in a narrow gap in the floor. Well, this little cave is a busy place and we are uninvited visitors here. 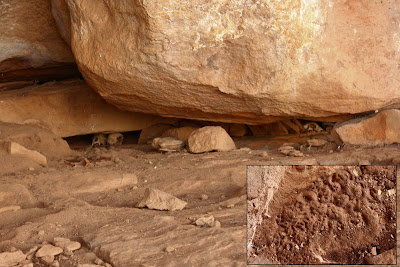 We scanned the walls, no signs of any rock art. However there were three characters which might be Kannada numerals - 608. 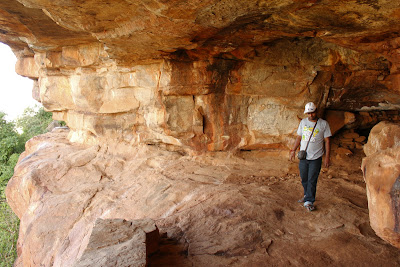 The cave is not entirely in its original condition. Boulders have been positioned to forma sort of wall along the mouth. The caves belly seems to stretch deeper than seen. The inner chambers have been walled with boulders, perhaps that was done (obviously by men) to prevent larger animals like bears or leopards from hiding inside. 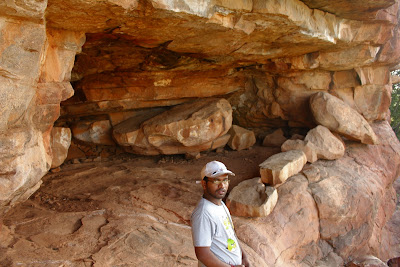 Out patience to bear the foul air came to an end, we decided to move out. We had to walk along the sheer cliff and find a less steeper face to reach the top. 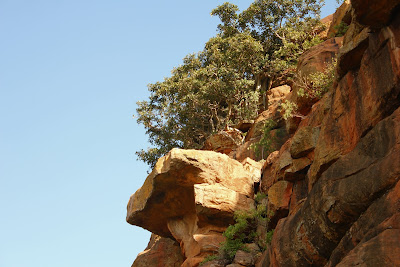 We saw several smaller caverns, large enough for bears. We did not dare go too close to these. 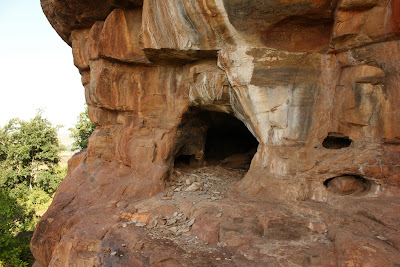 About 100 meters from the cave we found a regularly used path snaking up. 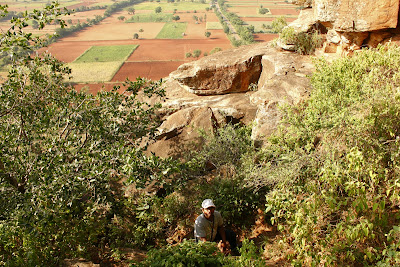 We managed fine without help from locals. We hit the top and saw the first sign of ancient construction close to the edge of the cliff. 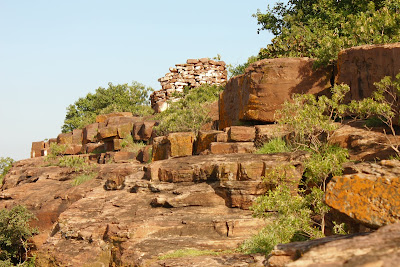 That's Pyati village and the slope we trekked.

This hill doesn't have a peak, instead it's a vast plateau. It felt as though we were on plain ground. The breeze felt great. The task of finding the ruins lay ahead.