Aihole, the cradle of temple architecture is one of the oldest and most important historical places in Karnataka. The little sleepy village is home to a prehistoric site and ancient temples; sources say there are 125 temples, built over several centuries by the kings of Badami Chalukyan dynasty. Archaeological department has divided Aihole's temples into 22 groups and the most popular group is the Durga Gudi complex named after the aesthetically prominent structure - Durga Gudi.

Of all monuments at Aihole, tourists are required to buy tickets only at Durga Gudi complex. Entry fees for children is Rs.5 and Rs. 10 for adults. Separate entry fee for for museum is charged- Rs.5 and Rs. 10 for children and adults respectively. Tickets have to be purchased for cameras too. For non-Indian tourists, entry fee is different. The temple complex is open between 6 AM and 6 PM; museum is open from 9 AM to 5 PM. Note: museum is closed on Fridays. Guides are available, its advisable to take their services. 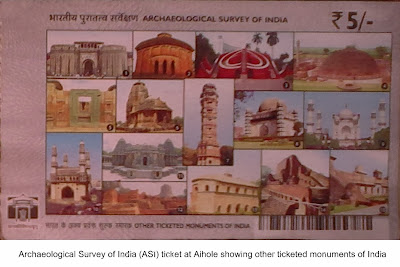 A signage close to the complex  entrance gives out basic information.


AIHOLE
(5th - 8th A.D)
Aihole (Aryapura of the inscriptions) occupies a unique place in the history of temple architecture in India. It was the experimenting ground for early Chalukyan kings (450 - 750 A.D.) to build structureal temples from the midfifth century onwards. Within the ancient fortification alone there are fifty temples and fifty can be seen outside. Most of them are Vaishnavaites temples later converted into Saivite ones. Among them the following groups are important.

The early temples namely the Gaudar, Ladkhan, Kunti and Huchappayya Math are of the pavilion type with a slightly sloping roof. The first phase of the early Chalukyan architecture ended with the construction of the Meguti temple which is incidentally the earliest dated (634 A.D.) structural temple in India, Here the inscription mentions the poet Kalidasa.
Further experimentations in giving a cognate shape to the temple roof by adding towers resulted in evolving three distinct types namely the Dravida, Nagara and Kadamba-Nagara. Some shrines in Galaganatha and Mallikarjuna groups having an octagonal domical finial come under the Dravida type. While those with stepped pyramidal roof are classified as Kadamba-Nagara. More evolved forms of Dravida temples occur at Badami and Pattadakal. The Huchimalli temple and Chakra Gudi are good examples of Nagara type with curvilinear Sikhara.
The Durga temple is unique in conception on account of its apsidal plan but non-apsidal curvilinear Sikhara.
Some of the later Jaina temples belong to the Rashtrakuta period.
The sculptural art of the early Chalukyan period as exemplified in the Ladkhan, Durga, Kunti, Huchappayya and Huchimalli temples and Ravan-Phadi is full of vigour.
The 'Aihole 500' mentioned in the inscriptions appears to be a guild engaged in building temples.

Durga Gudi complex consist of 12 temples, one gateway, two wells and a museum. Names of the temples are as follows-
Some of these temples carry names of the families which occupied these temples before Archaeological Survey of India (ASI) took over them. For example; Badiger means carpenter and Gaudara refers to the village headman Gauda. Below is the line diagram of the complex, showing approximate locations of the temples.
Let's take a look at each of the temples.

Durga Gudi was built in 742 CE. With a unique design it is the most aesthetically appealing structure in Aihole. Contrary to its name, the temple is not dedicated to Durga Devi but it is names so because of its close proximity to the fort's rampart wall. Gudi means temple is Kannada. This east facing temple is built in the lines of a Buddhist Chaitya; in plan it is a rectangle with a semicircular side; inside is a rectangular chamber with an aisle around it. Outer walls of the temple are decorated with life size sculptures of Hindu gods, goddesses accompanied by other mythological characters. The Garbhagudi (sanctum sanctorum) is situated towards the semi-circular end. The temple is topped by a stepped ceiling and a tapered Shikhara. Durga Gudi's unique architecture is said to have inspired Sansad Bhavan's (Parliament House at New Delhi) design.

Opposite Durga Gudi is this simple structure, a temple without a name.

A well connected with a flight of steps into it.

This simple structure is believed to be a gateway to Durga Gudi. In fact the structure does have characteristics of a gateway. Back then there must have been a wall around Durga Gudi.

An east-facing single chamber temple with a tapered Shikhara without a name.
Chappar Gudi - the name has been derived from the Kannada word 'Chappara' meaning thatched roof. The slanting roof of this temple resembles a thatched roof house which indicated that houses did have slanting roofs in VIII century CE.

Nadyar Gudi is a Trikutachala, a temple with 3 shrines. Though it has 3 Garbhagudi only one Dravida style Shikhara can be seen. Seems like some parts of the temple are damaged badly. The temple's circular columns are said to be similar to columns of Hoysala temples. A similar temple can be seen at Talagunda.

Suryanarayana Gudi was built in VII or VIII century CE. The temple had a Rekhanagara Shikhara, now its not in place. There's an image of Garuda holding serpents on the Garbhagriha door-frame lintel. Also there are images of Suryadeva, Ganga and Yamuna.

Ladkhan Gudi is said to be built in 450 CE perhaps the oldest temple in this group. Also it is the next largest temple after Durga Gudi in this complex. The temple has a primitive look, like a cave. The temple has a veranda like hall in the entrance and the interior is one large hall with an inner chamber - the Garbhagriha. A 5' tall Basavanna (Nandi) is seen opposite the Garbhagriha entrance. Columns are square and thick. On the plain walls are lattice windows in simple but beautiful design. One of the most noticeable designs are the fish-wheel windows. The temple lacks a Shikhara instead there's a flat-roof cubical shrine which is accessible from the veranda by a 10' tall step-ladder also made of stone. Flanking the temple entrance are six short pillars with Kannada inscriptions. The temple is named so because a army general by that name lived here.

Gaudara Gudi is named so because the village's Gauda (or Gowda) resided here. This is said to be one of the oldest temple in Karnataka. Within this complex, this is the third largest temple. A two line Kannada inscription on the Navaranga states the name of this temple as Durga Bhagavati Devalaya. It also mentions that 500 Mahajans of Aihole, 8 towns and 120 local rulers had donated land to this temple. The temple though simple in looks has a royal feel. This 64 pillared temple lacks a Shikhara.

Chakra Gudi is said to be built in IX century CE. The temple is named so because of the Malaka atop its Rekhanagara Shikhara. This simple-looking temple has a set of amorous couples sculpted on the door-frame of the Garbhagriha.

Badiger Gudi literally means carpenter's temple. However it is named so because a carpenter's family resided here before the archaeological department took over. This IX century CE temple was a Surya temple. The temple has three distinct parts- Mukha mantapa, Ranga Mantapa and Garbhagriha. An image of Dakshabrahma can be found here.


Kalyani opposite Badiger temple is larger than the one near Durga Gudi. According to Hindu tradition, a source of water has to accompany a shrine, be it a river, lake pond or a well. Aihole being situated on the right bank of river Malaprabha has few wells in the village. Water stains on the walls clearly indicate dipping water-table.
Archaeological Museum is a modern day contribution to Aihole. The museum is in two parts- outdoor and indoor. The outdoor museum consists of a neatly arranged, named and dated collection of ancient sculptures found within and beyond Aihole. The indoor museum is a collection of important sculptures, illustrations on prehistoric life style, a 3D scale model of Aihole showing locations of historic monuments and a book shop. For tourists who wish to see Aihole completely, this museum is the right place to start the tour; studying the 3D scale model will help a tourist plan a convenient route.

Though a popular tourist place Aihole is quite simple, no restaurants here but there are small eateries offering a limited range of snacks, packaged crisps, bottled water and sot-drinks. Under the large banyan tree close to Durga temple complex entrance are hawkers selling banana, guavas and limbu-soda (lemon-salt-soda). It would be a good idea to carry sufficient water and food because shops/hawkers are only in the vicinity of Durga Gudi but monuments are spread out, some are well outside the village limits. Finally, remember to be dressed in light cotton apparel and it would really helpful to wear a cap.. an umbrella would be better.