October 4, 2014
We had arrived at the last spot for the day. The fort was easily visible as we approached the village from west. We could get a glimpse of the fort on our left but to reach it we had to drive into the village. While inquiring directions we had a volunteer guide :) Shri. Mallikarjun. We navigated the narrow streets towards the village outskirts.. Srinu chose to stay with his Swift because of his bike, to keep curious hands away. View fort from where the Swift was parked. Mallikarjun leads the way towards their neglected magnificent fort. 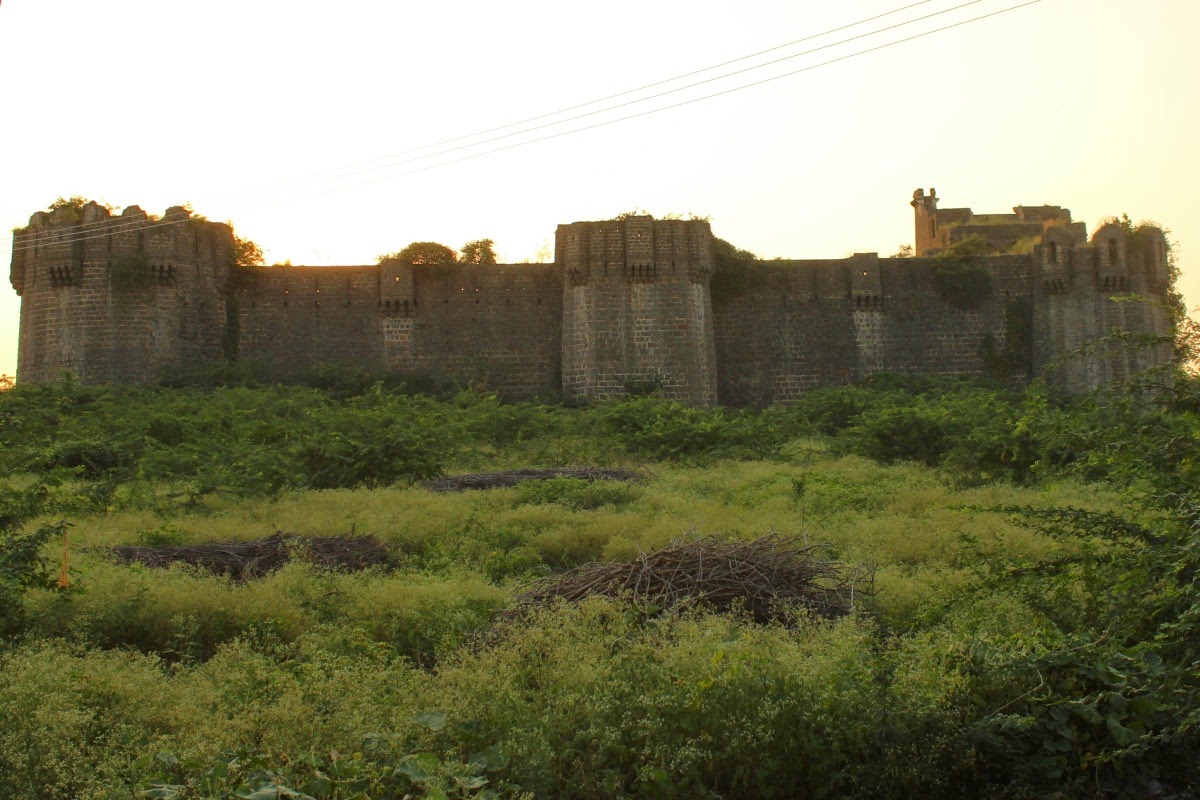 Bhatambra fort walls are built of the black stone, similar to Hankuni fort but the designs are different. Bhatambra fort has the look of an English castle, I think. The fort is completely surrounded by peek jaali bushes. 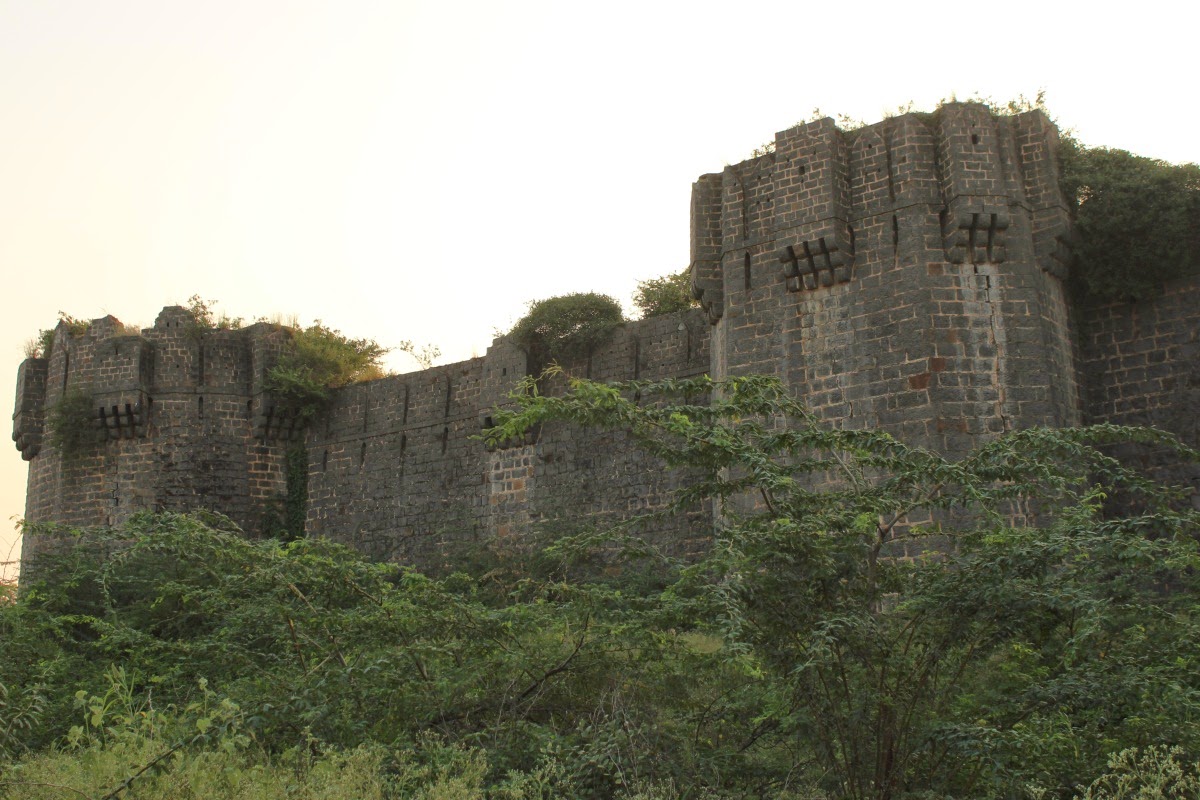 That's Mr.Mallikarjun. He's a typical Bidarian person, an agriculturist by profession. The arch way seen up there is supposed to be the fort's main entrance, it's base is a good 10' above ground level. There had to be a stairway once upon a time and now its missing. Probably the stairway was demolished and stones carted away to some building site... quite possible. 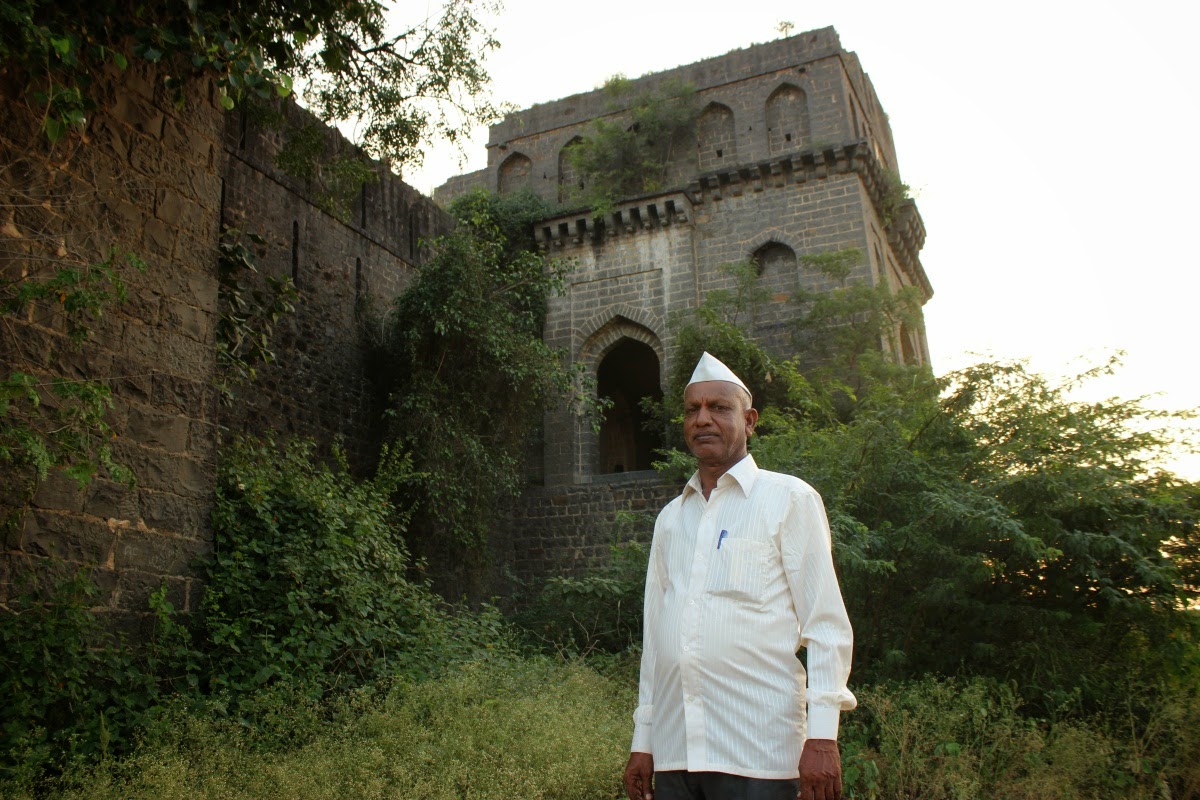 The fort's entrance tower is the highest part too, gives a clear view of the surrounding plains. The closed arches seen here must have been open arches originally later closed to increase security. 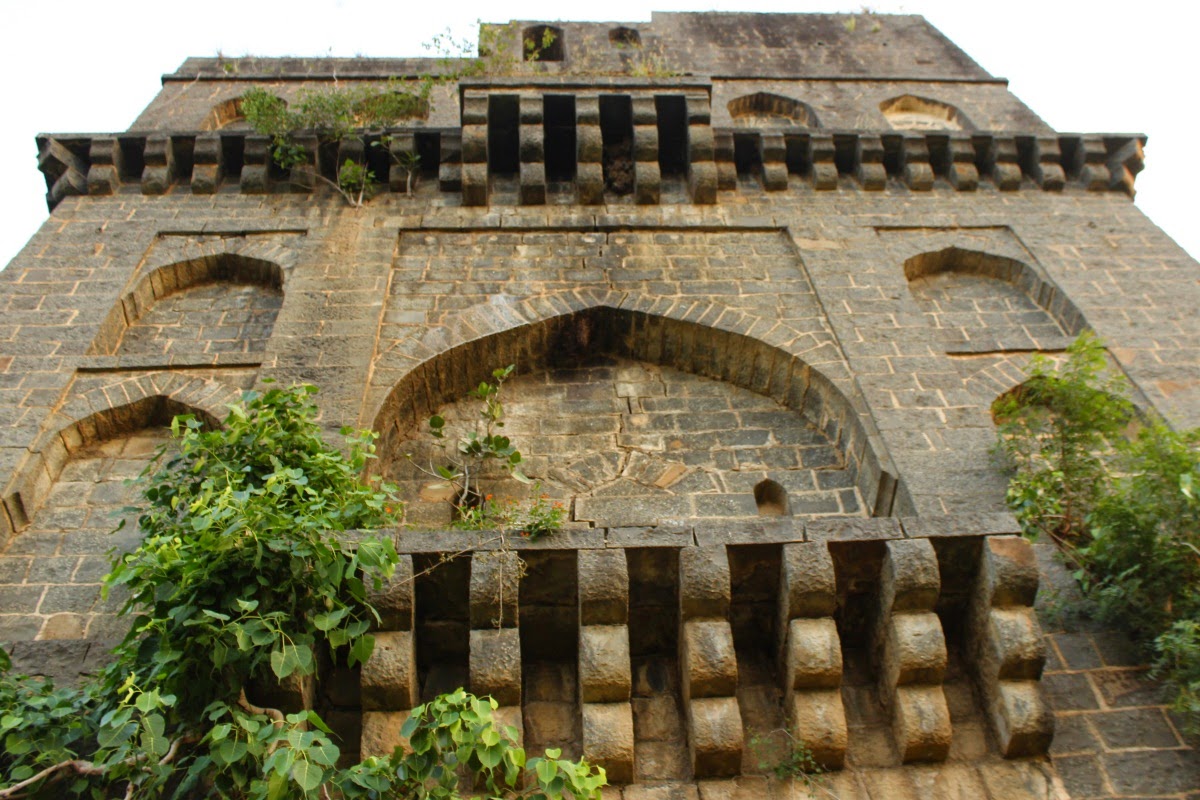 We walk along the northern wall towards the western wall. 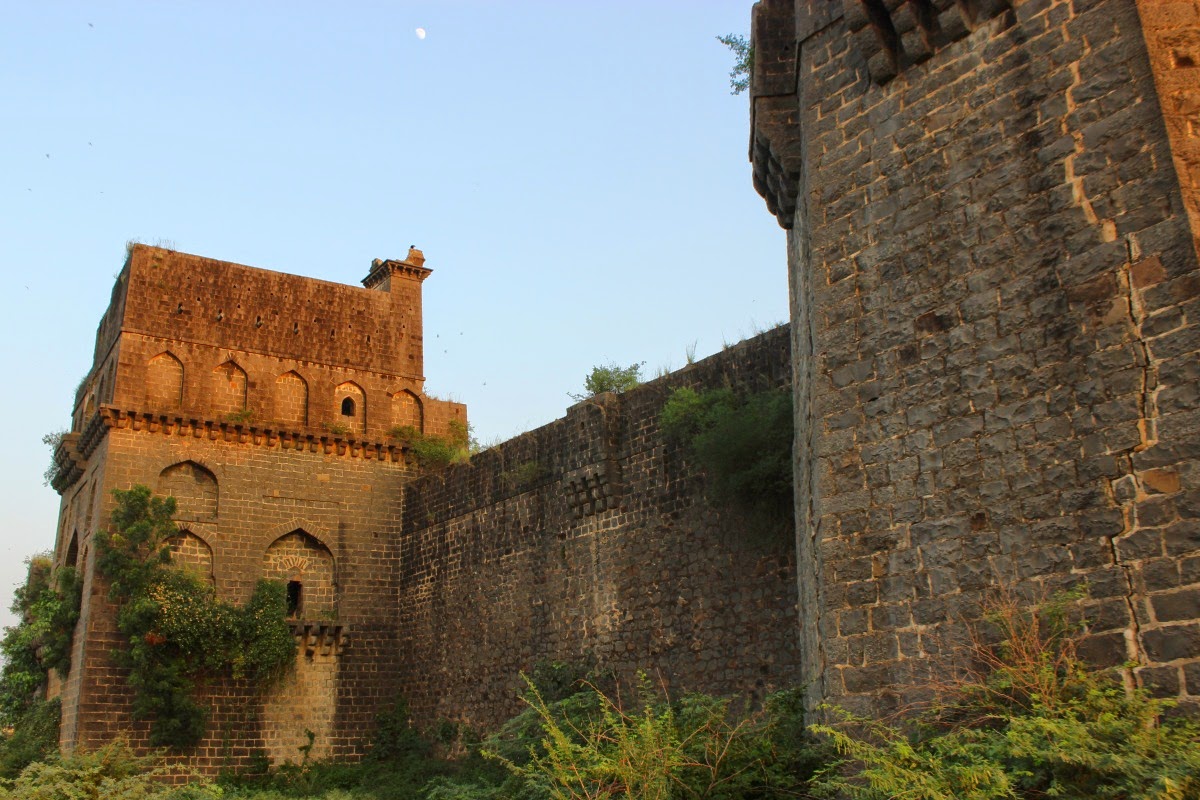 The western wall. The structure's condition is pretty good considering the fact it is built on black soil. 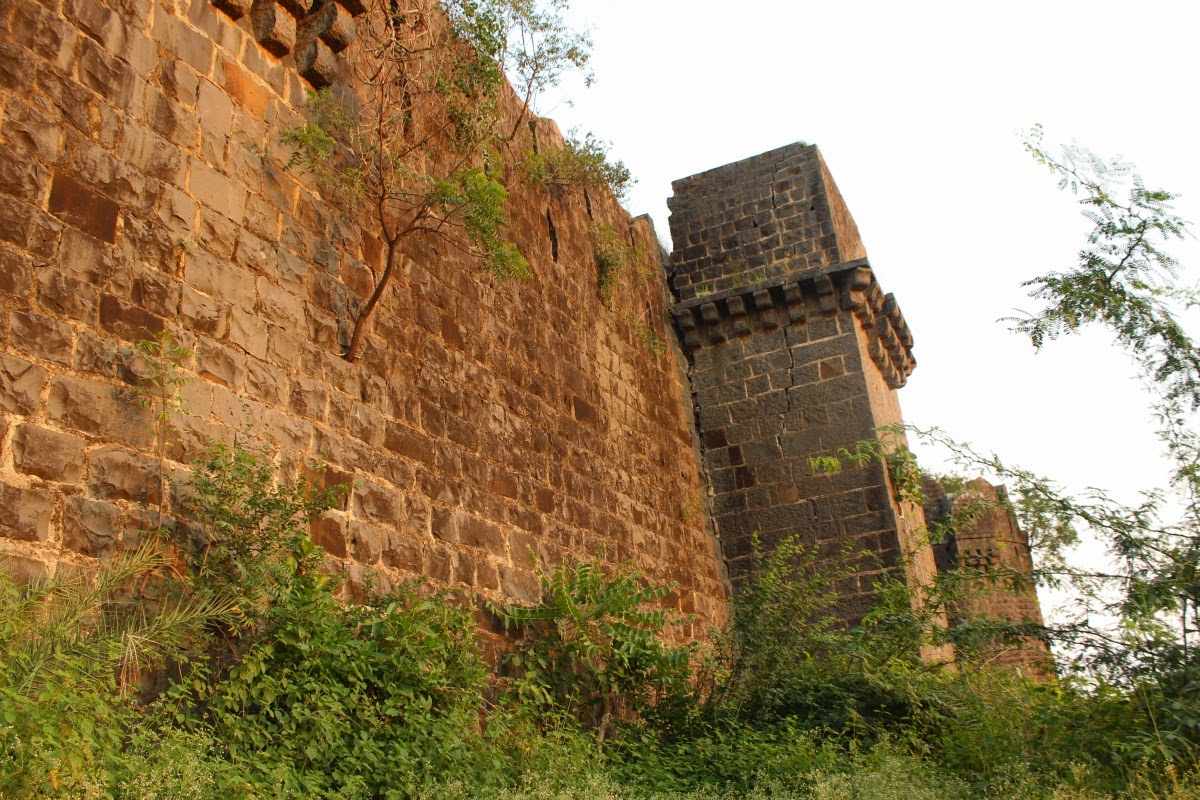 That's our passge to Bhatambra fort.. 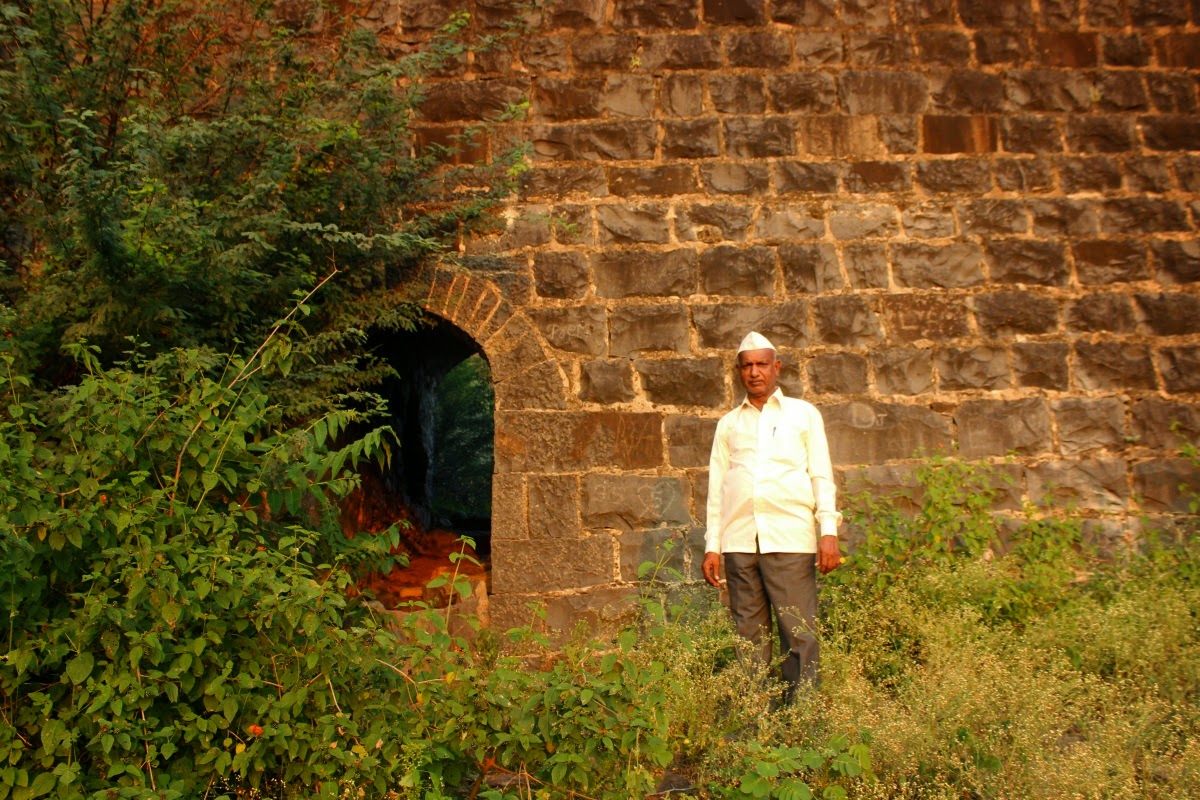 ..spacious enough for a horse also. A sentry chamber on the left wall. 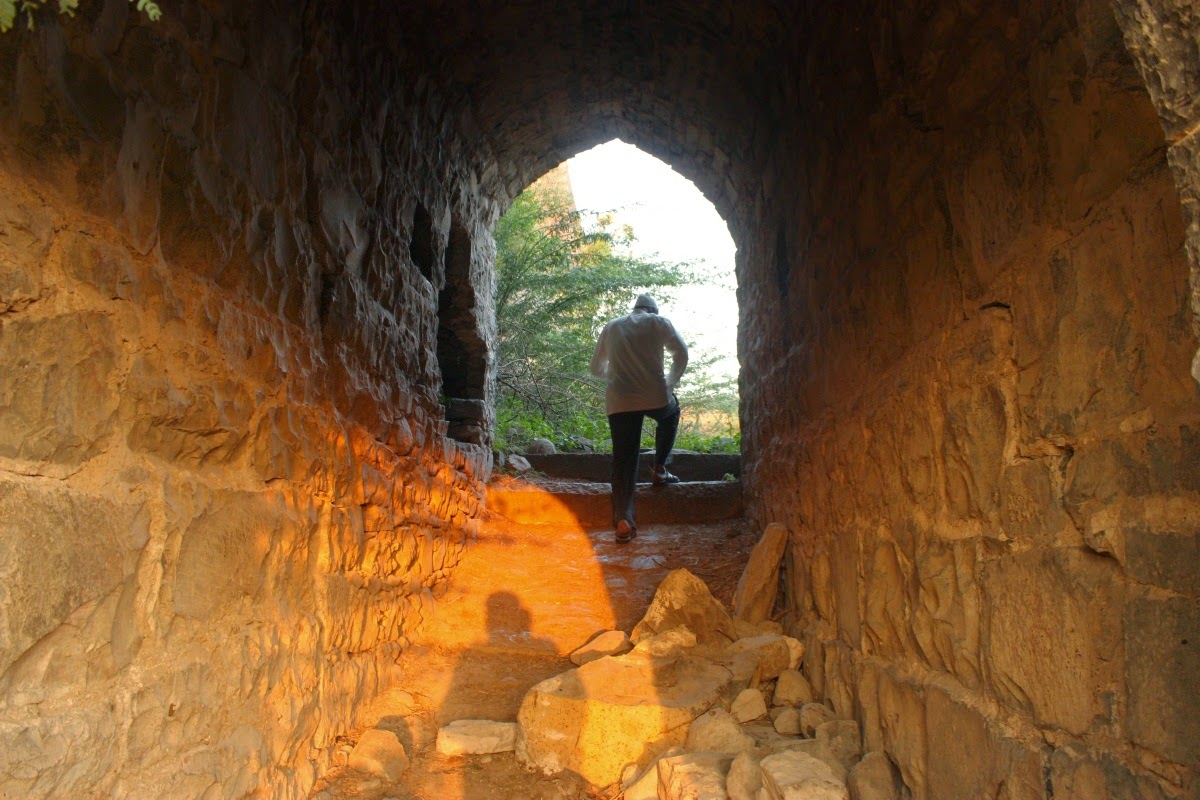 The inside view of the entrance tower. The room up there must have built for the commander. 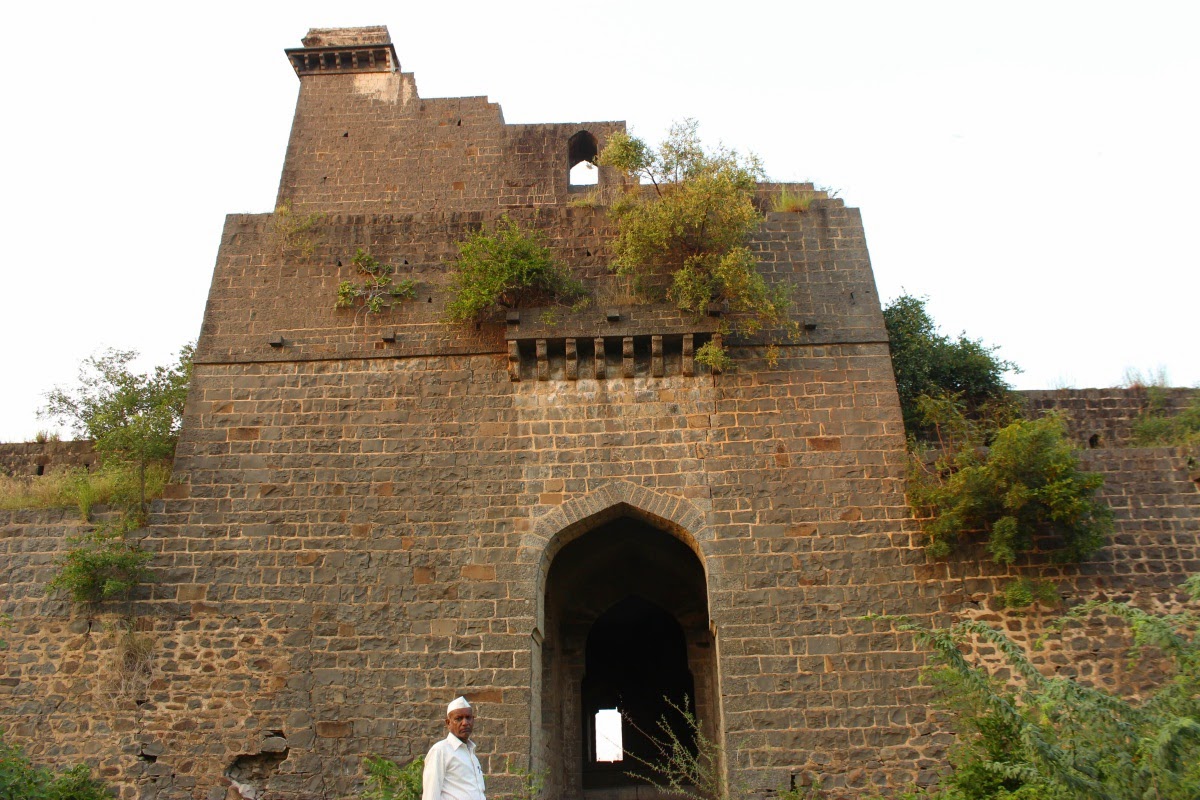 The inside is plain except for one palace building and a well next to it. 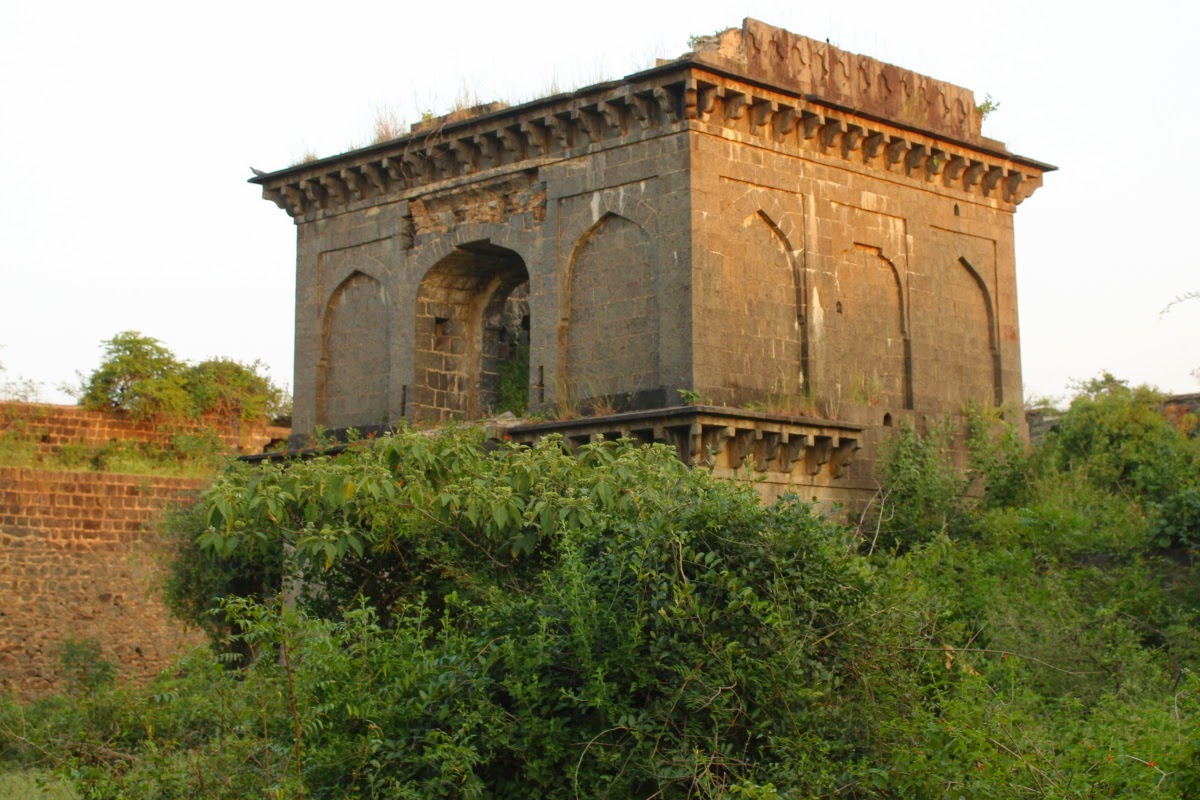 We enter the main tower. Its a well built structure, solid! 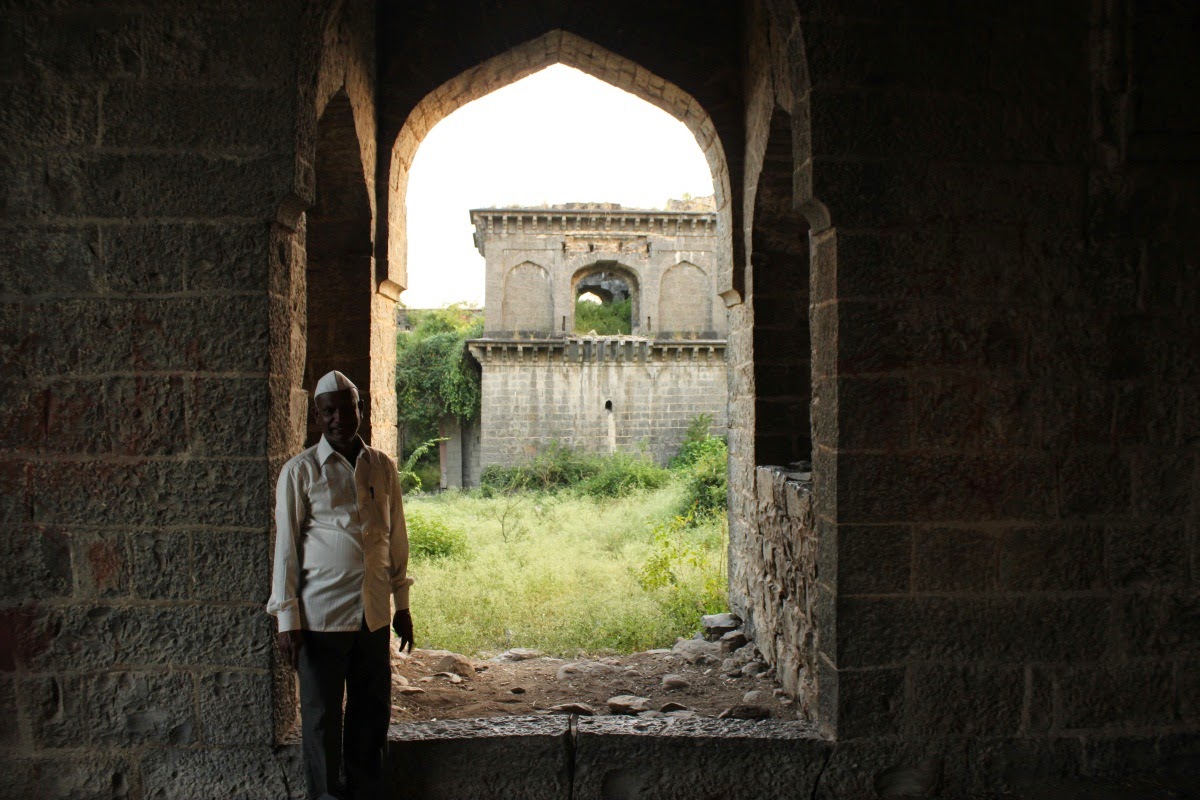 It's spacious inside. On the left is a raised platform probably used by security officers. If you notice the right and left edges of the arch, there are two small blocks fixed into the corners. Those blocks were to hold swinging doors' stubs. 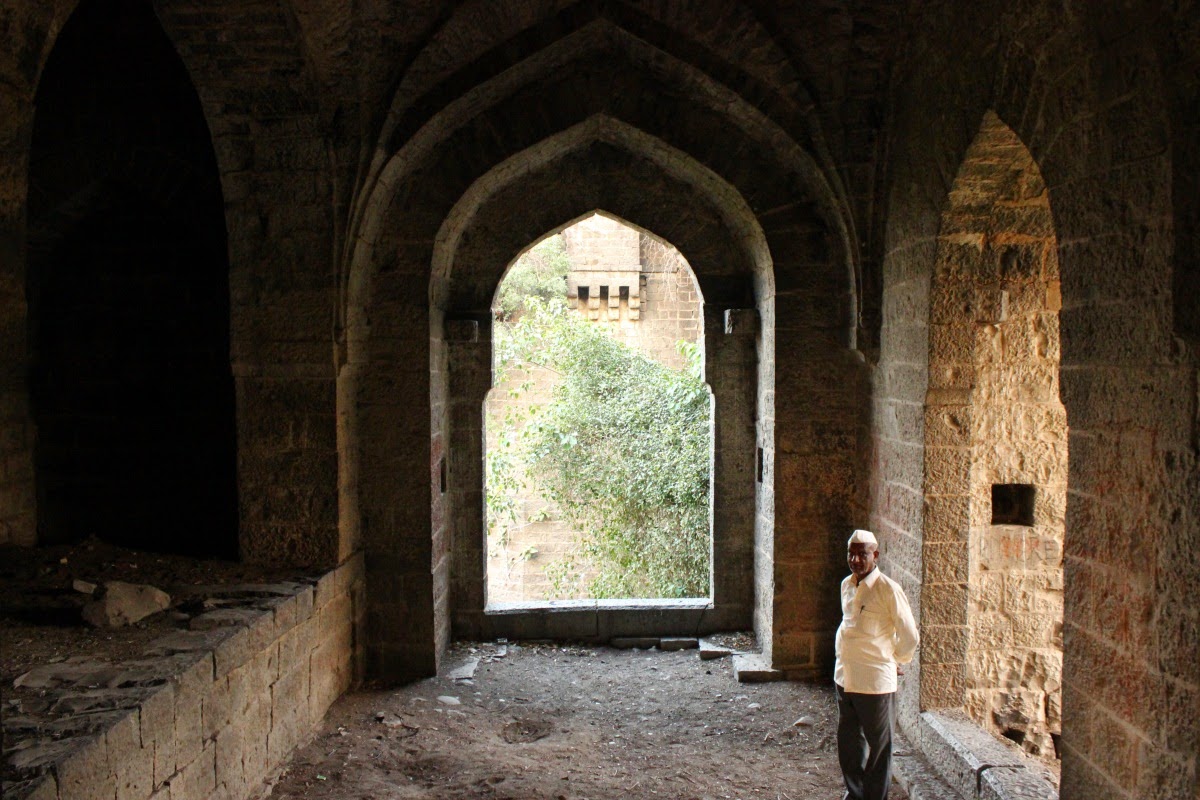 Closer look at one of the blocks. The shaft at the doors head would fit into the round hole. A similar shaft at the foot would go into a hole in the floor. The door would swing easily... probably 3 strong men were required to swing the heavy wooden doors. 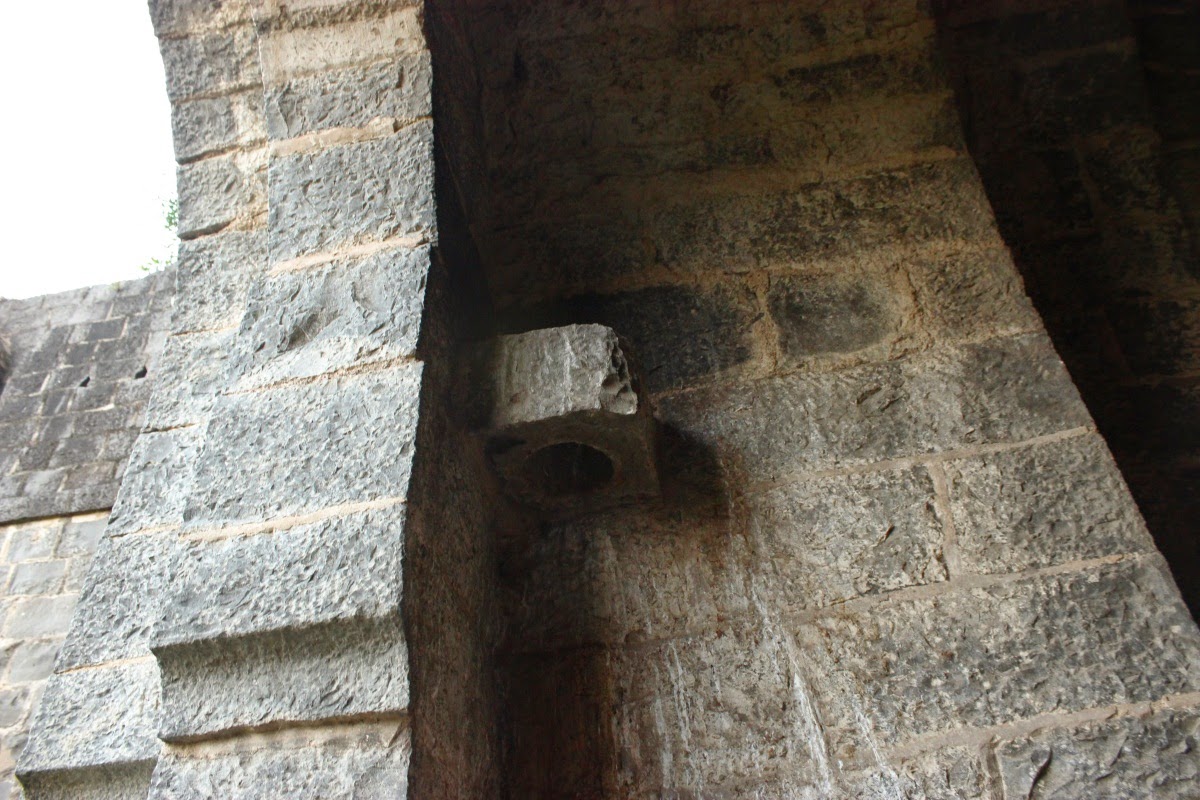 View from the tower; northern wall and north-western bastion. These walls has cracks which were filled up. 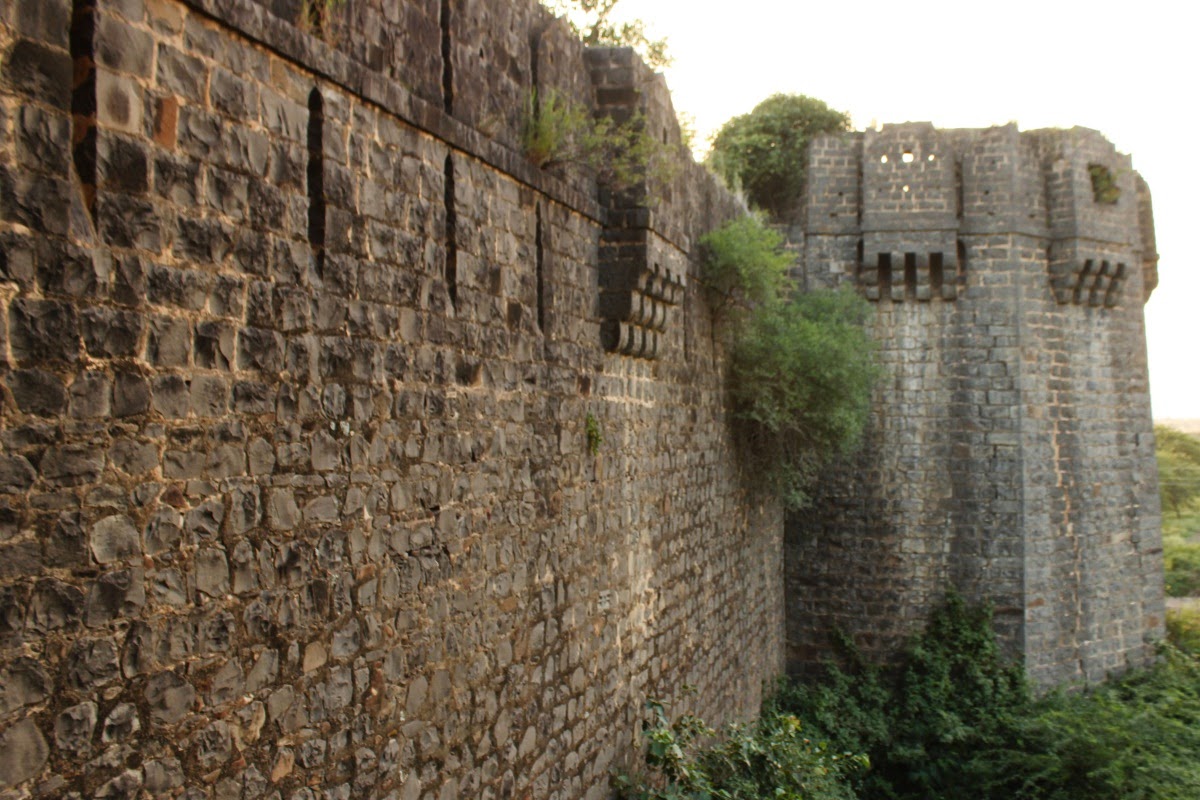 One of the side walls had a narrow stairway going up but we did not risk it.. too many thorny bushes. God knows what creatures were lurking in them waiting to sting us. Wish I has shot a video :( 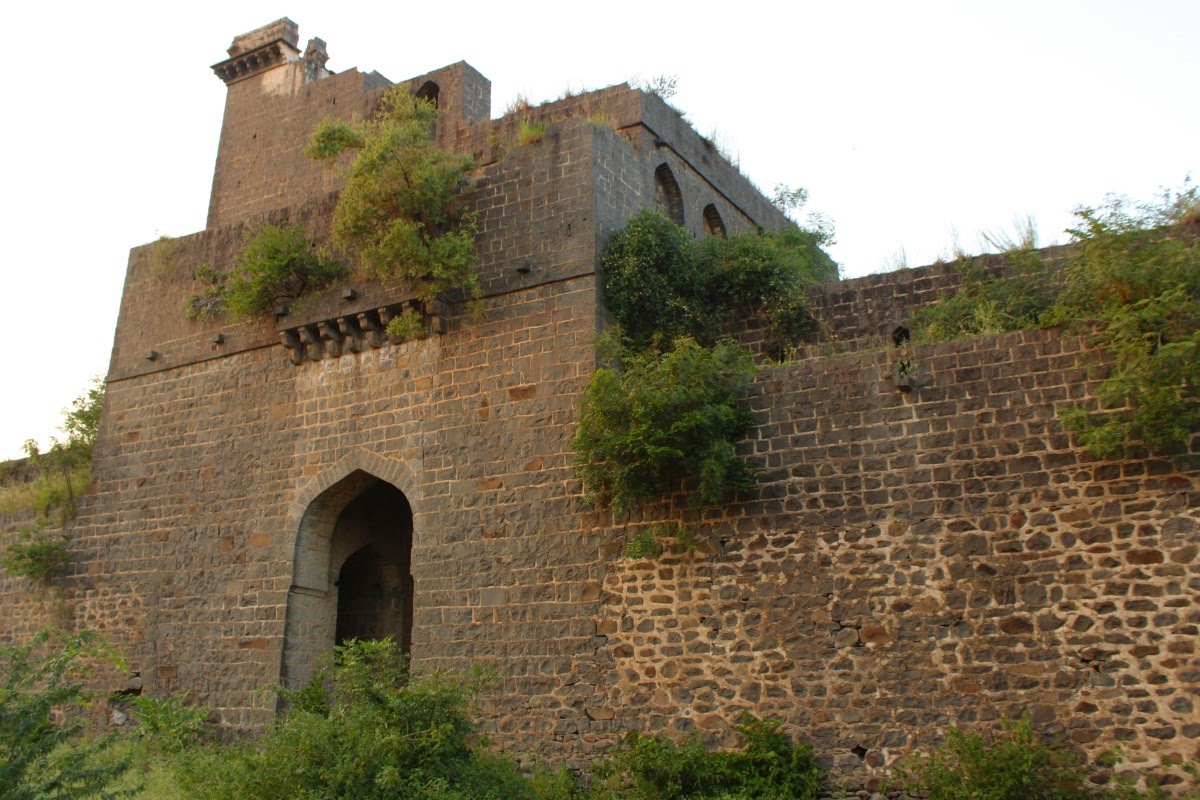 Light was fading, we decided to leave. Hopefully, some day I'll come back to explore in detail. We drove to the village square, had hot tea, bid bye to our host and drove towards Bidar.. camp for the night there.

Its an splendid fort indeed, pics posted reveals the fort for the reader, its sad thing that it hasn't got proper attention like many other forts too.

Good exploration man. I could not visit bhalki and bhatambra forts as we spent lot of time at basavakalyan and shivapura. Good information. Looks like I will have to take a sickle with me when I go there next time, if I am to see those stairs. Some wonderful shots as well.

Thank you Manjula, Rajesh. Its a good idea to carry implements like sickle, machete and rope. When you go towards Bidar, besides Bhalki and Bhatambra forts make time for Hankuni and Rameshwara forts too.

A very fabulous description of Bhatambra fort with beautiful pictures , thanks for posting and writing such an interesting blog.

Malharrao Patil from byalahalli (w), first of all I wold thanks for posting, the fort is about 12th century by bahumani dynasty. I hope govt and tourism depot should focus better maintenance. Make to success for tourism place including bhalki fort too