This fort was discovered while scanning area around Bhalki on Google Maps/ The fort is tiny, its more of a sentry point for Bhalki fort situated on the plains, about 4.6 kilometers air distance.

October 5, 2014
I left Bidar around 5-30 AM, weather was cool, Bidar-Bhalki road was almost flawless, passing through forest area. Near Bhalki I overshot the left turn by 5 kms :( I was back on track and heading towards Bhalki town and on the right I could see a hillock with ruins at the summit. Yes, it had to be Rameshwar Tekadee. Tekadee is the Marathi word for hill. I knew there was a dirt track going up the hill starting at a small ashram near the base of the hillock. I parked Srinu's Swift near the ashram and trekked uphill enjoying the fresh morning air. At the top, on the left is the fort and on the right is Rameshwar temple. 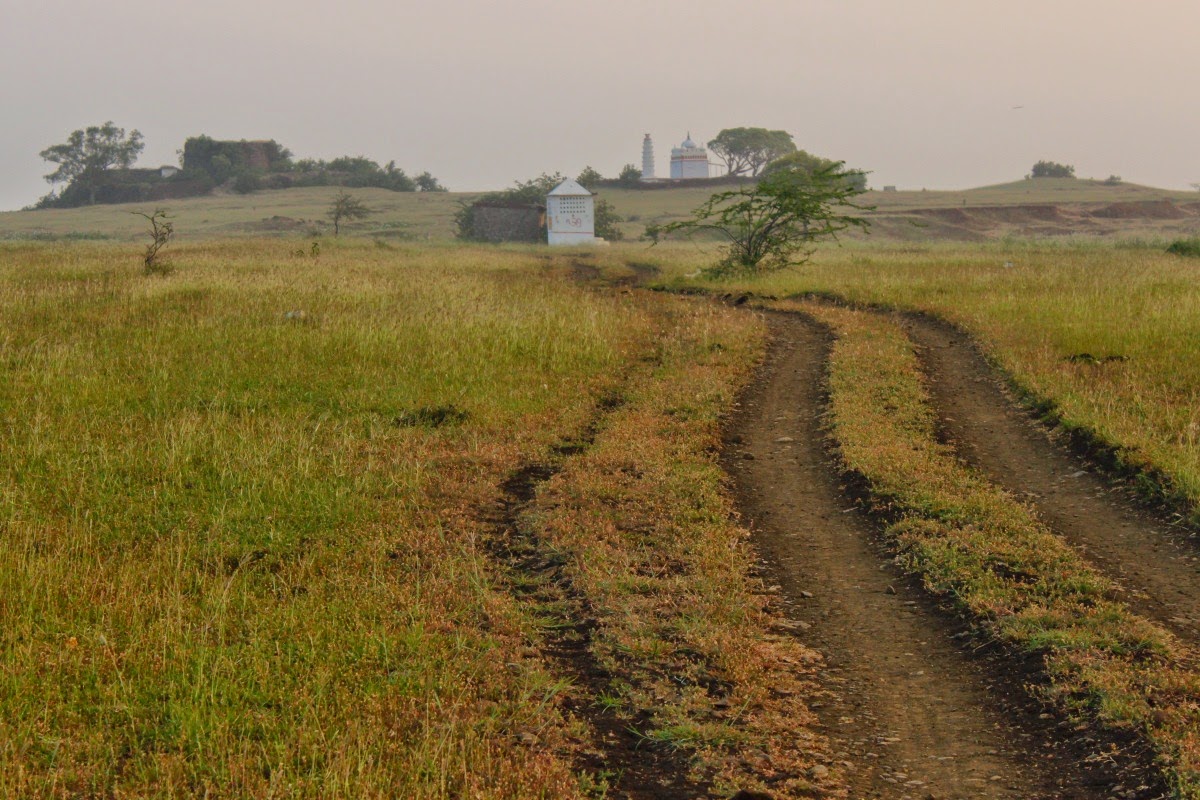 The bastion and fort walls come into view. I had a feeling this place is a good spot for local youngsters to party. A small pillar on the left caught my attention. 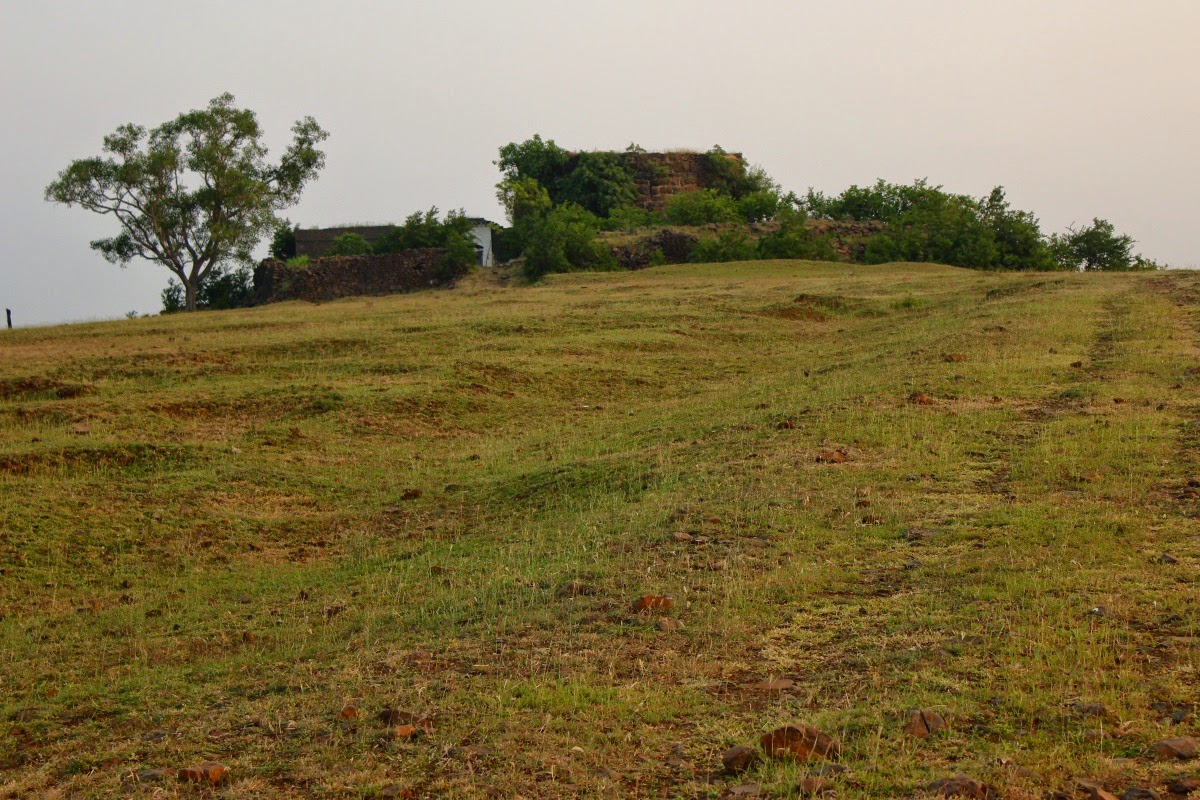 The rough-cut pillar was slick with oil. Looks like its some kind of a custom for locals to pour oil on the pillar on certain days.. probably on new moon. In the background is a quarry. There's another quarry on the opposite of the hill. 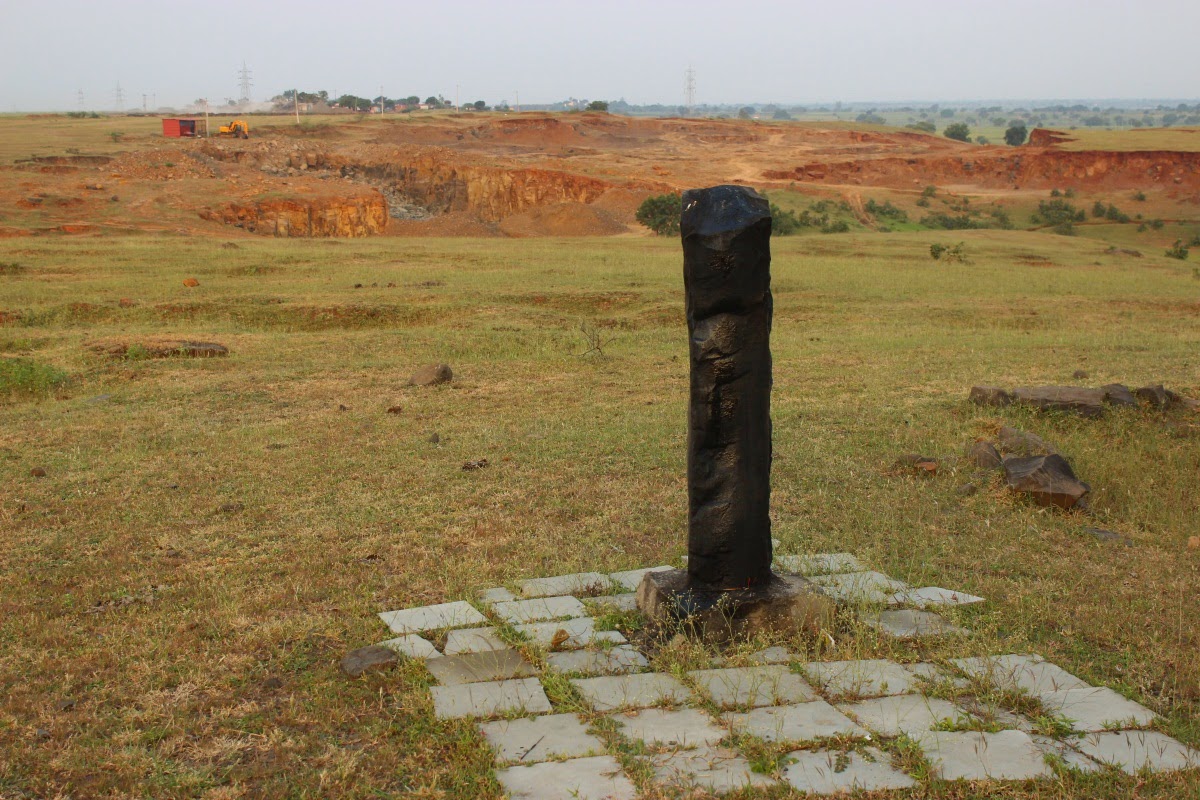 This is one of the corners of the fort.. rough-cut stones stacked with great skill. There's no binding material holding these stones. I feel this was the original structure, built probably a 1000 years ago. 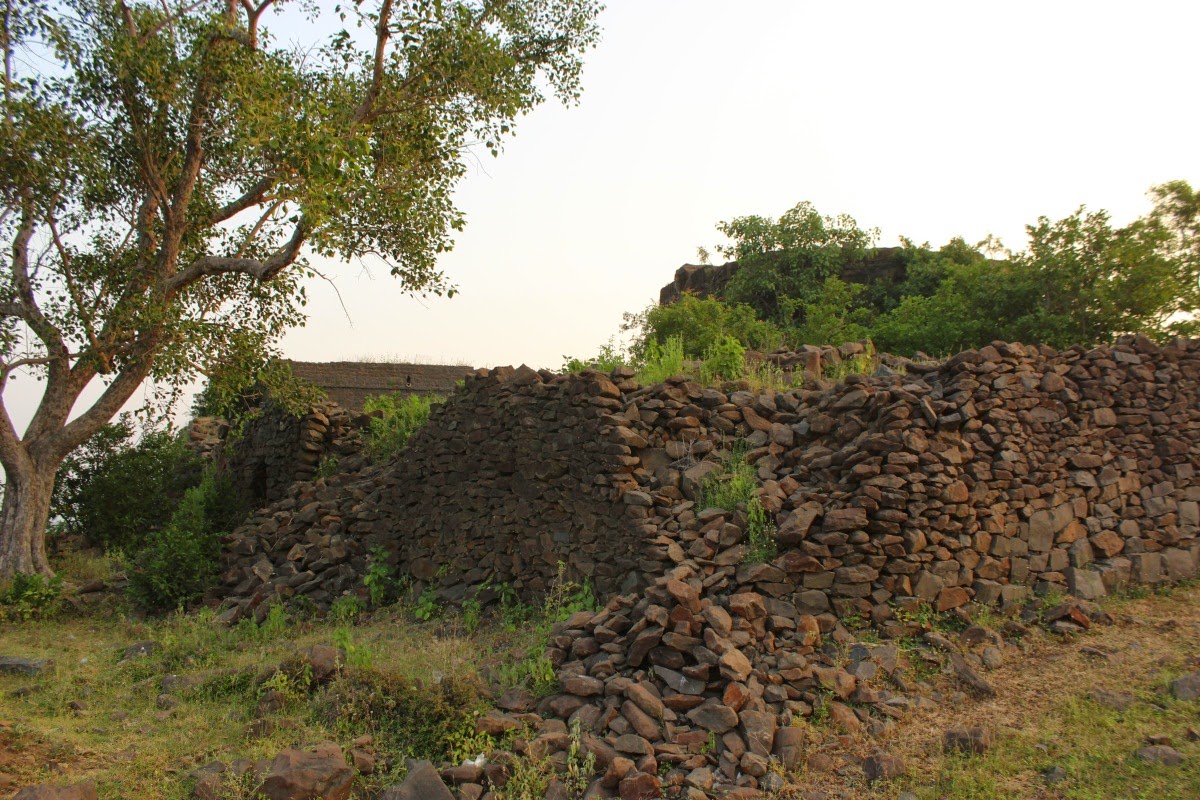 The tree gives a eerie look to the ruins. 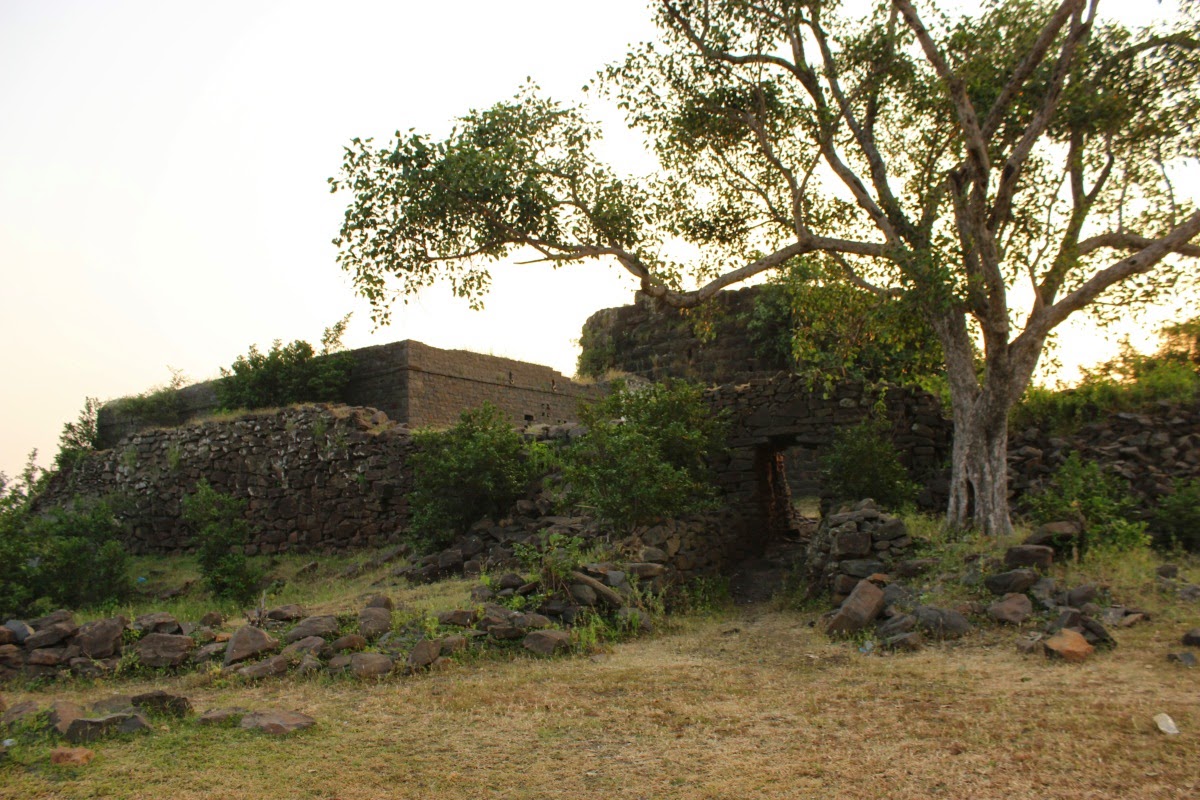 Ancient gateway of the original structure. These walls and gateway remind me of forts near Badami such as Kelur, Chikanal and Gudur, Siddanakolla, etc. 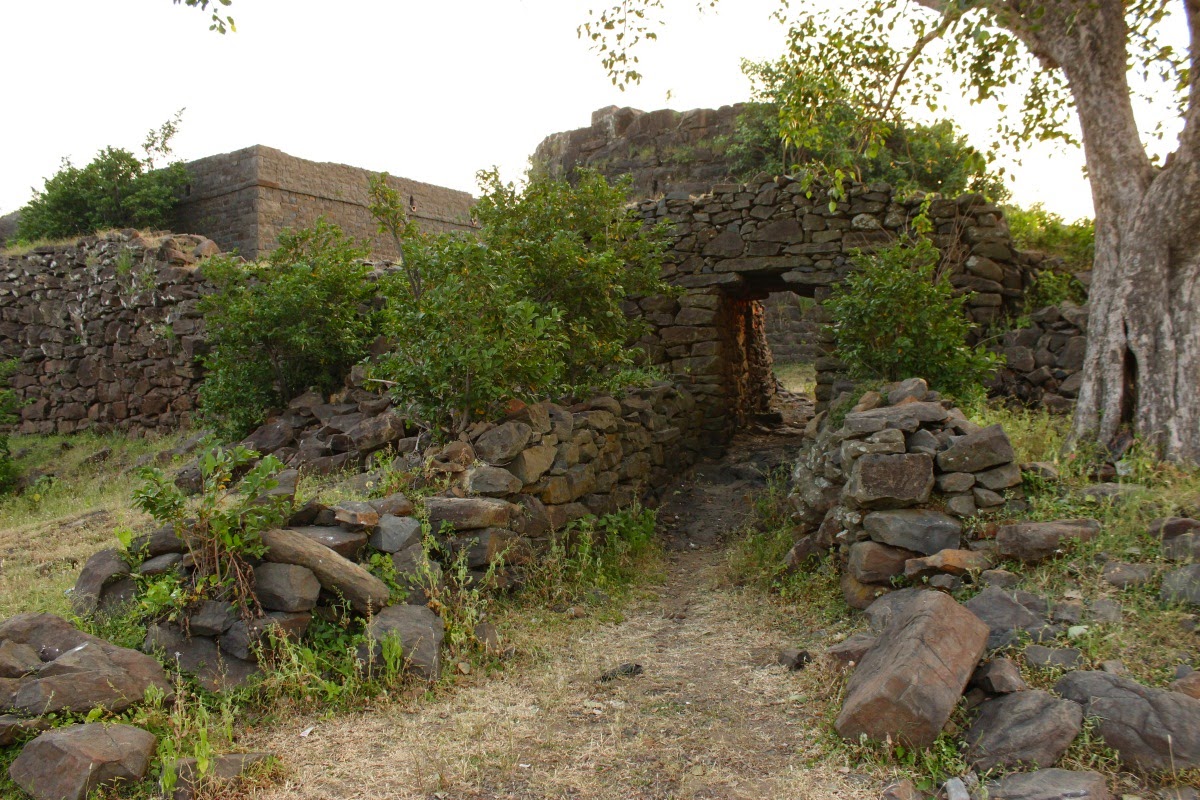 The gateway was seen from inside. Early morning rays on the rocks create a warm glow. 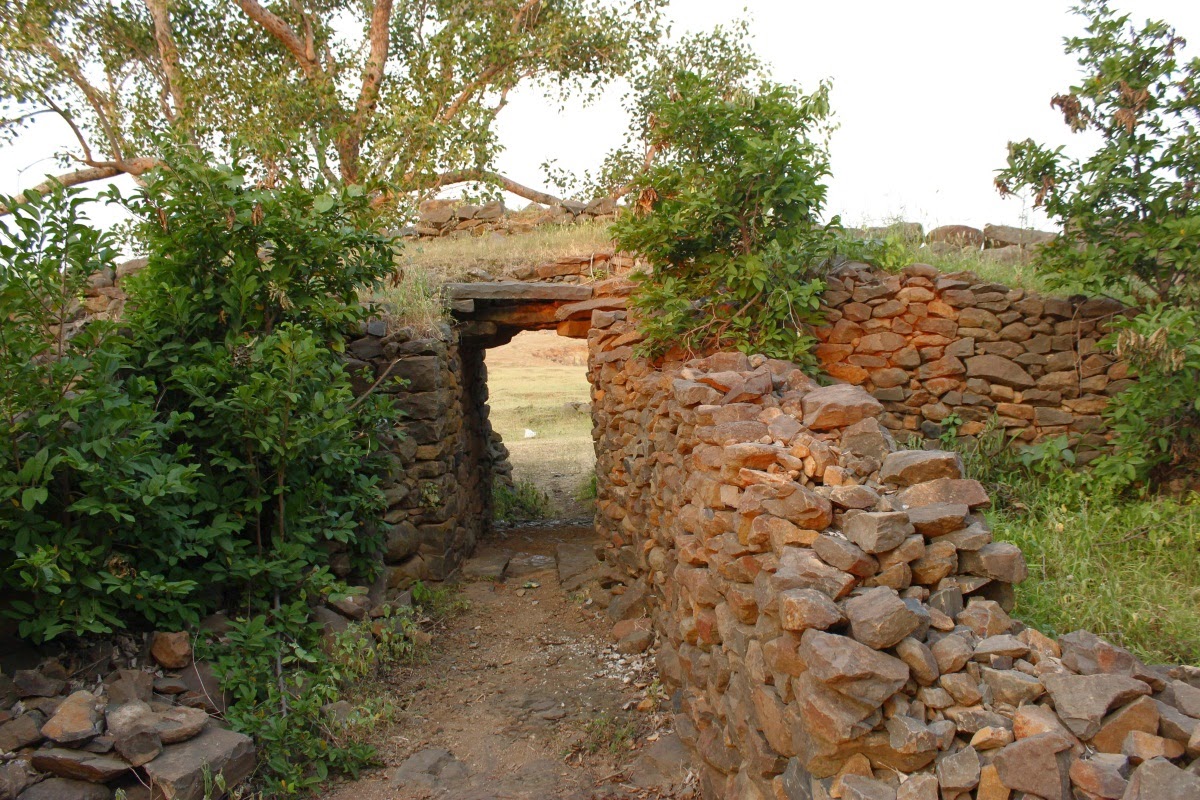 This is the other entrance.. a ramp created by a heap of fallen stones from a collapsed wall. 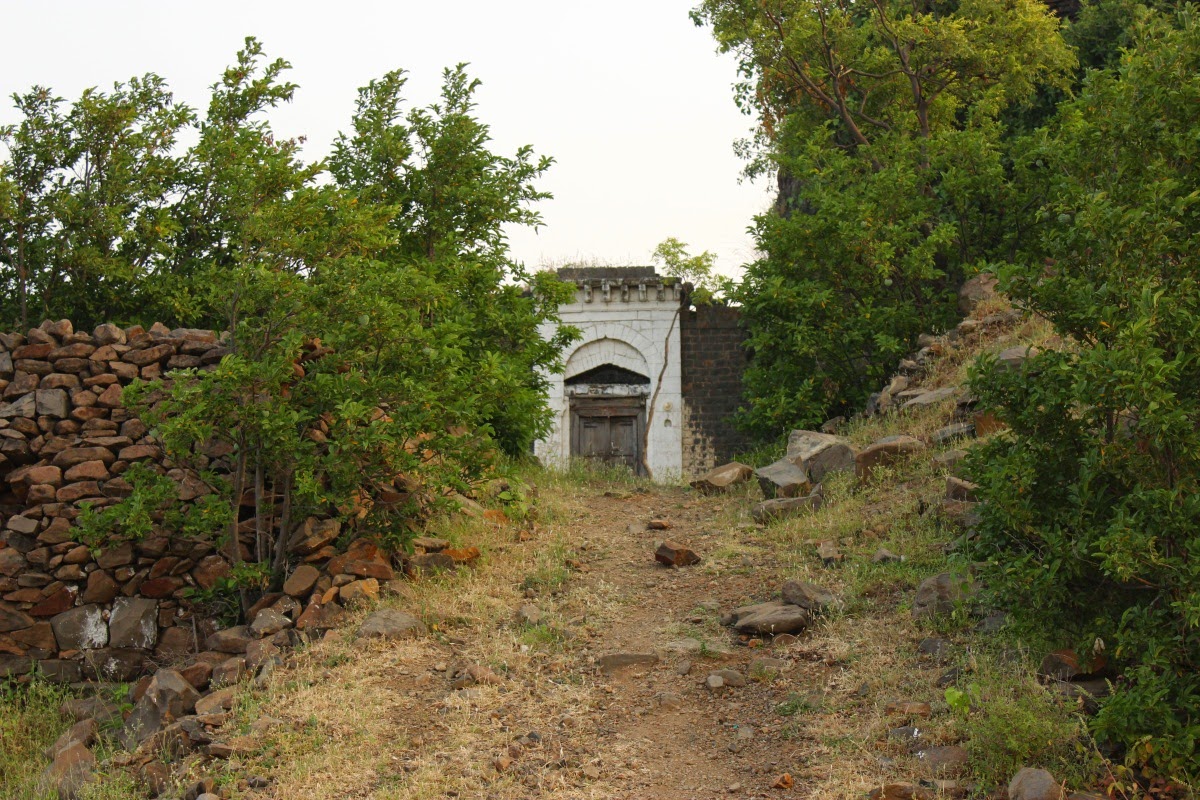 Over the ramp, the new structure comes into view. These walls are made of dressed black stones and mortar bind them. I stepped into that doorway carefully.. lest it was occupied by humans or animal. 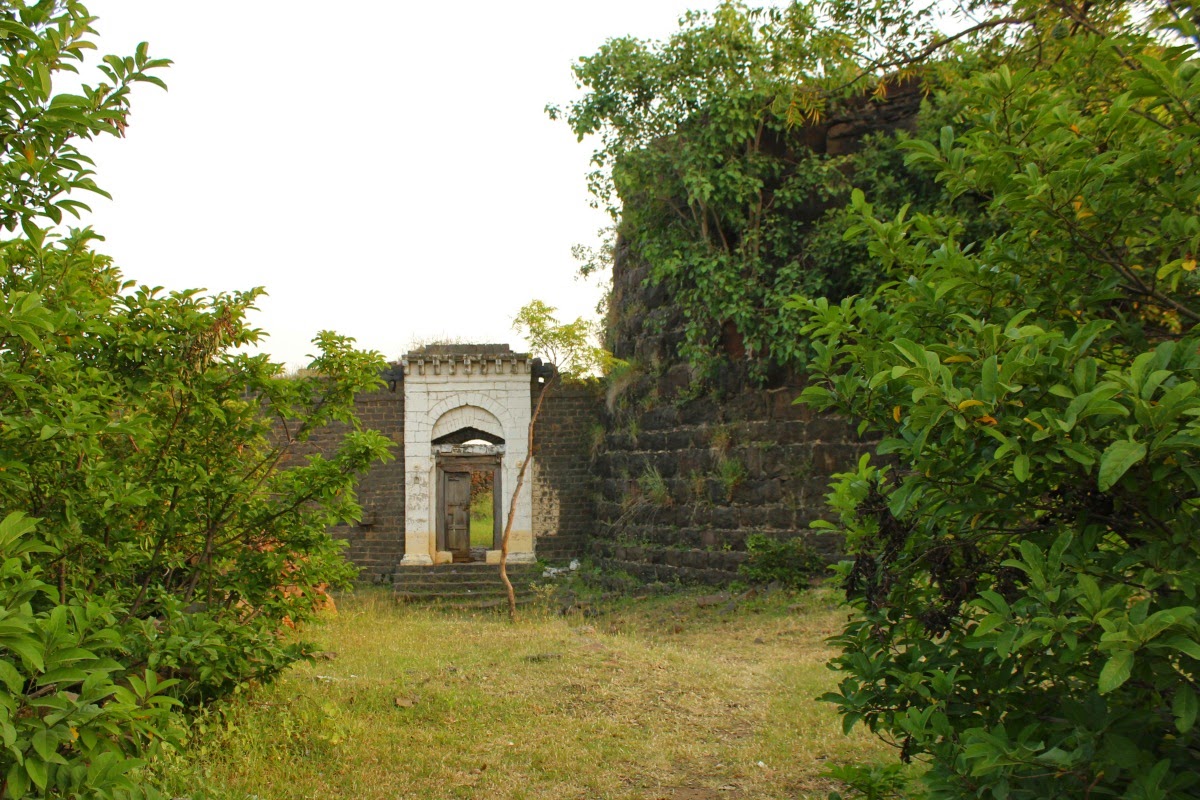 No, nobody in sight. It was a small enclosure with a room on one side. I feel this place is privately owned by some individual connected to kings who ruled Bhalki. To the right of the doorway is water tank. Note the lamp nests in the wall either sides of the doorway. 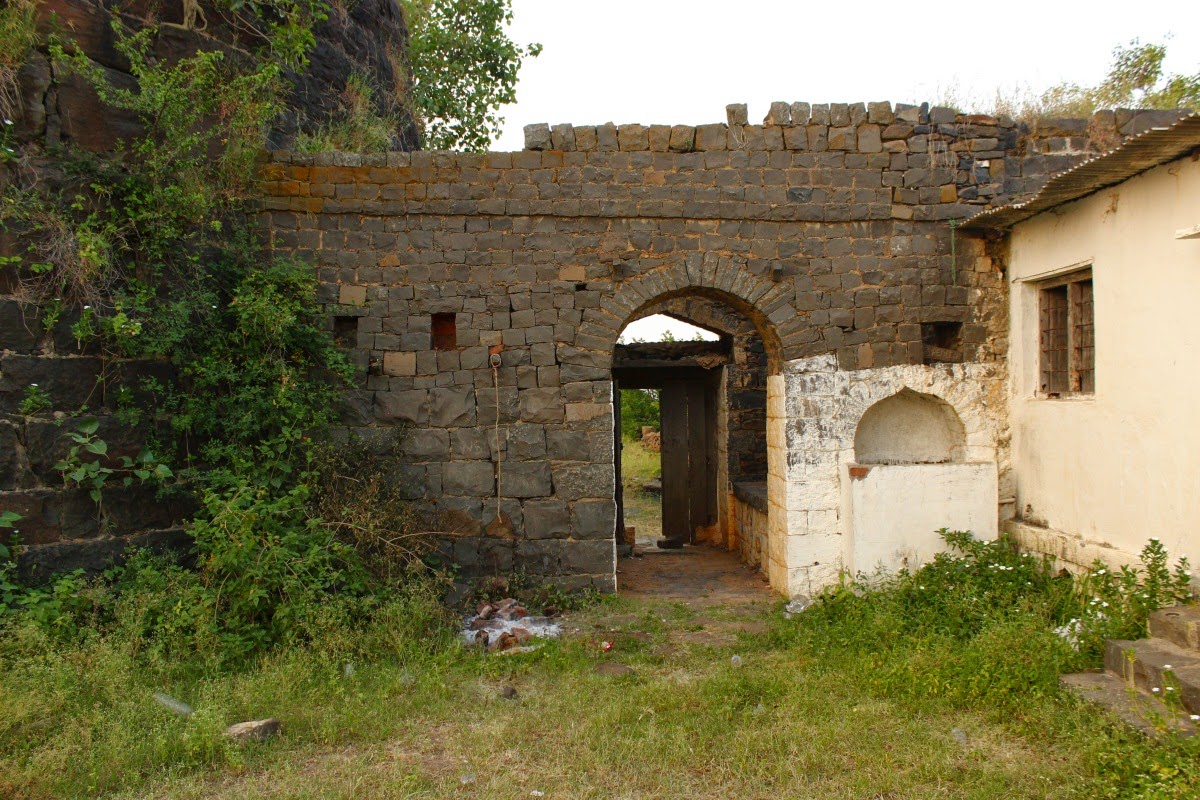 One of the inner walls had a torch holder. At the base of the wall is a rain water drain. 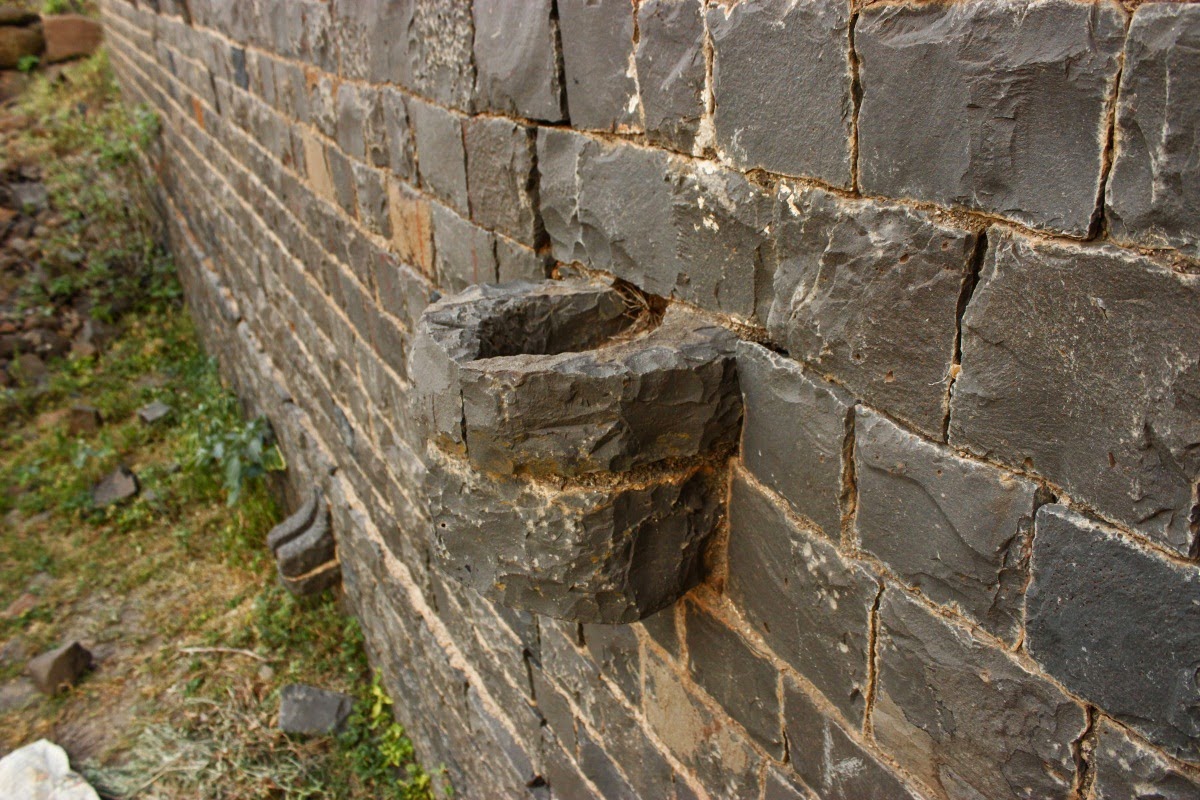 The fort has only one known entrance. I ventured to the rear, could see a large bed of rock under the walls and the slope was much steeper than in the front. This is the side view.. the bastion, inner wall and enclosure, and the outer wall. Looks like there were plans to expand the fort, for some reason construction was abandoned. 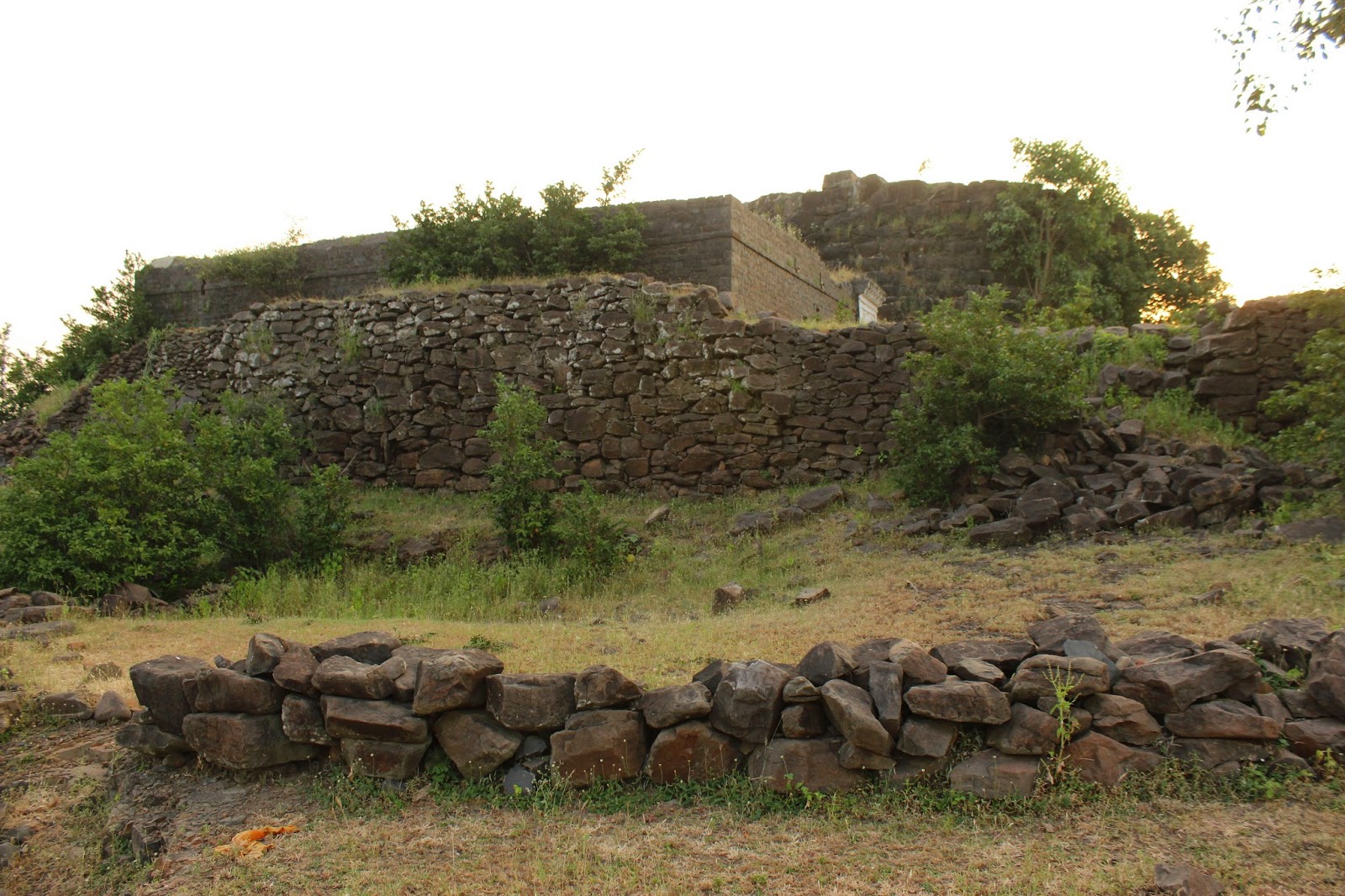 Buruj ~ bastion as seen from east. On the other side is a very low entrance to a narrow stairway going to the top of the tower. I did not take the risk of exploring that dark passage. That's Rameshwar temple and its Deepastambha ~ lamp tower. This shrine seems to be important for local people, looks like a fair is held every year. The lamp tower has a small cellar.. unsure if it was a shrine or a just a shelter. The two Frangipani trees give a lively to the shrine. 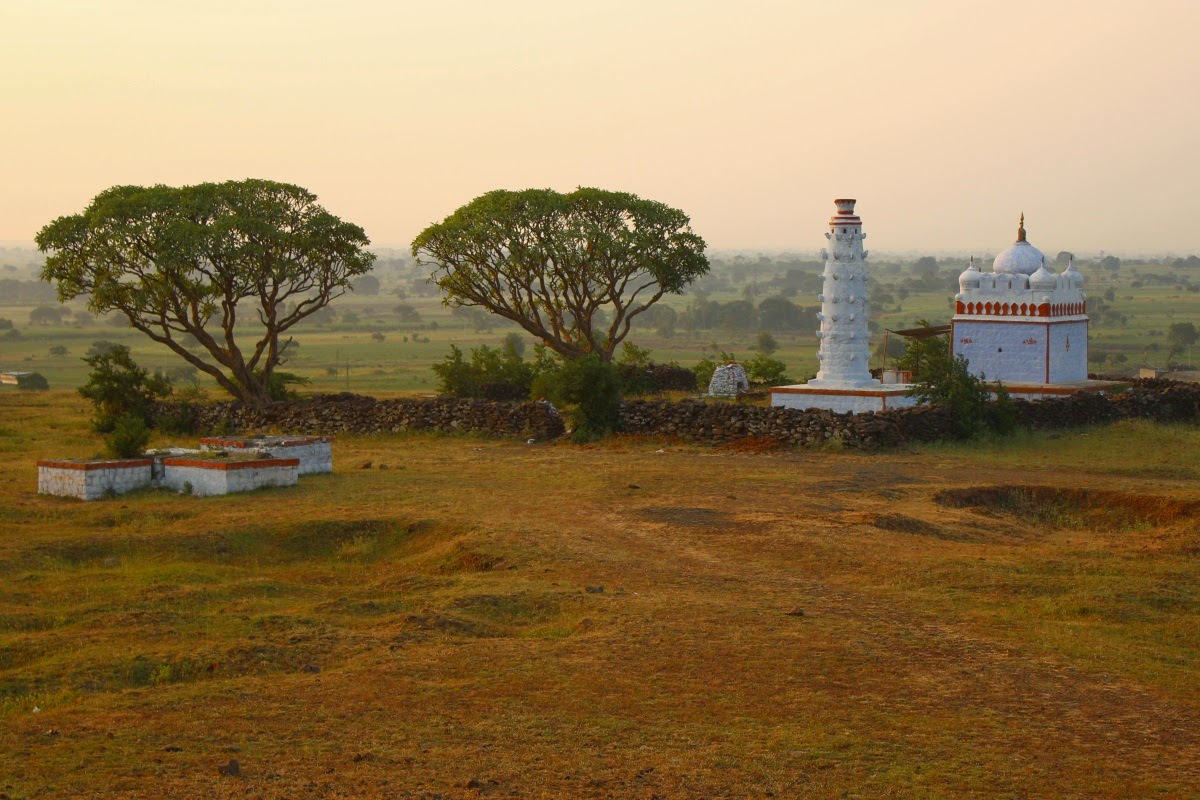