This would be my first ever corporate team outing and probably the first ever to a resort too. The outing was organised by the Professional Services team. Members of the group were made responsible for dress code, transportation, accommodation, food and activities.. very much like project management. The plan was to assemble in front of our office building at 7-30 AM; drive to Deecan Trials resort near Vikarabad; spend a day, a night and leave following morning. 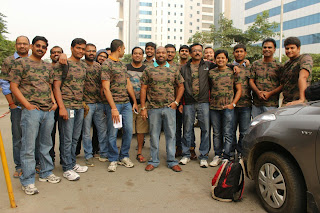 We left in 5 cars; I was in Ravi Vubbena's carr.. he was one maniac of a driver! Once we hit ORR, Ravi was racing Mogili and in the excitement missed APPA exit. There's no turning back on OOR.. we had to drive further until we found another exit and then turn back towards APPA junction. 20 minutes later we joined the remaining group at APPA junction. The journey resumed, heading towards VIkarabad; now Ravi was racing Kamesh. Our next stop was for breakfast at bandi. About 9 kms before Vikarabad; 1½ kms after Manne Guda we turned left into a dirt road; 2 ½ kms drive on the dirt track lead us to Deccan Trails.. the place had looks of a ranch and also of a military training centre. The resort's terrain is part plain and part hill. I was happy with the choice of place.. feels good to be in Nature :) 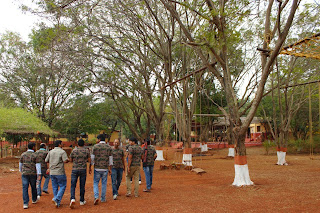 Whoever set up this resort made sure it was as rustic as possible. Welcome was with soft drinks.. team chatting away happily, talking about things to do, how to get organised here. 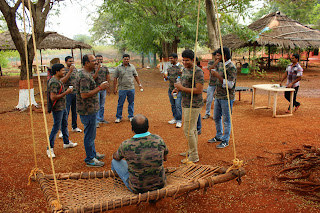 That's Vijay and Tarun swinging.. This place is not just good looking in pictures, it truly is a lovely place. 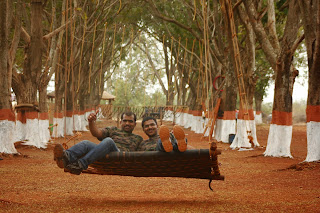 That's Ravi Vubbena the manic driver with the peaceful Avinash. 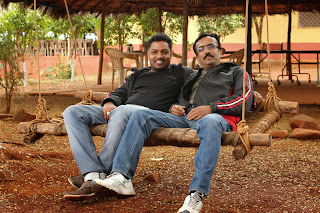 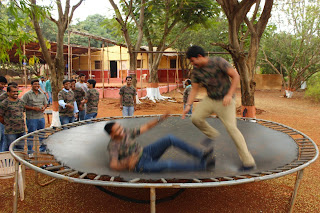 Looks like Nagarjuna was the first to climb up to the spider web.. while others watch, wondering how difficult or safe it is. 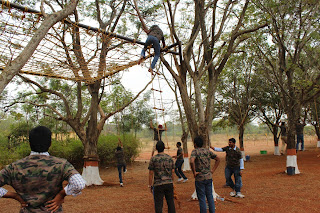 Part of the gang was trying out Rope Walking. I felt this setup was not designed to take more than 3 adults weight but the team was team was so charged fun was priority. 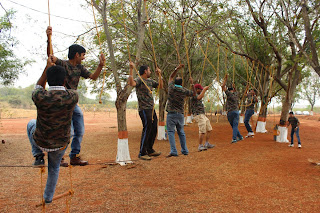 We were on our own until our activities co-ordinators turned up - Hamid and Siddiq. Hamid gave us an overview of the activities planned. There were two types- individual activities and group activities. Individual activities would be first, such as Tarzan Jump (or Tiger's Leap), Commando Net, Rock Climbing, Burma Bridge and Swing Walk - these were for pre-lunch session. 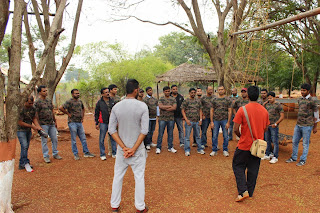 Tarzan jump was swinging off a rope across a trench. Our co-ordinator lead the group to the spot which was located on the hill slope; it was five minutes walk from the reception area. Our Co-ordinator showed us how to jump.. grip the rope firmly, swing as fast as possible, when you are across the ditch and still moving forward, let go the rope. Sounds easy. Whoever lands farthest would be the winner. I think all 21 members tried, most were successful while some landed in the trench. When I held the rope and looked down the slope and ditch.. was wondering if I'll make it. I braced myself few seconds and swung, kept my eyes on the ditch below, the moment I was over it I let go and landed right on the edge, kept and balance and made it! This is real fun. The winner of this activity was Vijay. 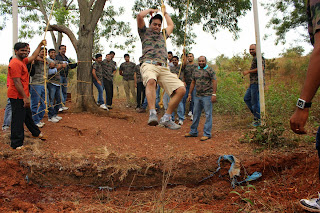 Another five minutes climb was the next activity- the Commando Net. The team's attire was a perfect match. Thumbs up to the idea! 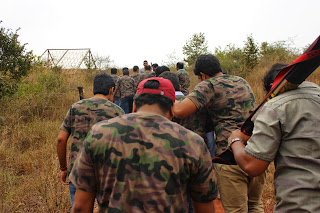 It was chaos as the gang attacked the net. However, the co-ordinator took control, races were conducted in batches of three or four. 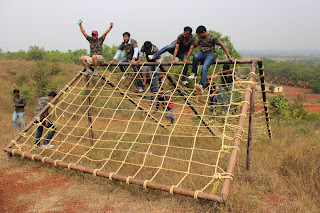 Next in line was rock climbing. Few years ago I'd seen rock-climbing at Kanteerava Stadium; that day my friend Gulli asked me give a try but for some reason I refused. The climb was approximately 20 feet high. Grip in your fingers is the key to this activity. Lighter people definitely have advantage here. 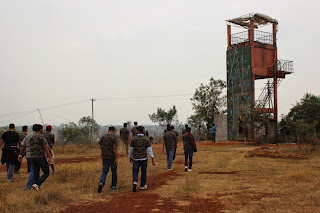 Vivek and Nagarjuna were the first to try, I think both made it to the bell tied at the top. Even for slim people, it wasn't really easy, this activity required a balance of strength and stamina. 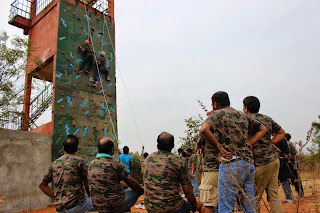 Almost everyone in the group tried, about half the people reach the bell. Watching climb and climb, I broke the ice and tried. I made it ¾ way but my arms started aching.. :( The rock board is actually propped up against the hydro-tower. I went up the tower, lovely view from here.. probably a good point to view sunrise and sunset.  In this picture, seen here is Kamesh. Yes, he made it to the bell, quite easily. 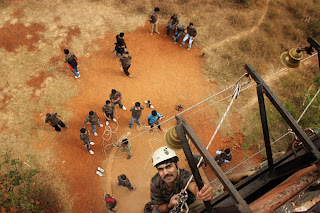 View from the hydro-tower, looking towards North. This is piece of level ground is actually a plateau; guest tents pitched on platforms built of laterite blocks. Soil properties here is similar to that of Bidar district. 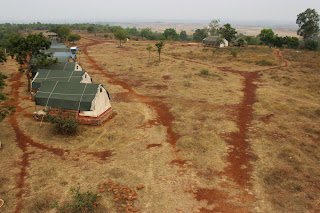 Having done with 3 activities, it was time for a short break and drinks. This shelter was close to the plateau edge, a 45° slope. However the gradient varied along the length of the hill. 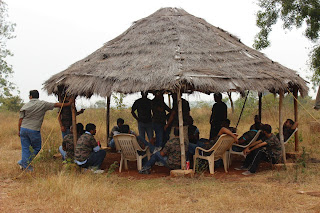 The break recharged our energy levels; gang was all set to resume action again.

this article will continue in the following post Team Outing at Deccan Trails - part 2.
.........
Posted by siddeshwar at 12:30 AM