Kurnool was a regular business destination through out 1990s and early 2000s. Mid 1990s was my first trip to Alampur, with two colleagues. That day it had rained, the sand-stone structures looked beautiful. Back then I hardly paid attention to who or when these temples were built. years later having seen countless Chalukyan temples, I realized the Chalukyan connection with Alampur. During my first visit, besides the temples and sculptures there's another object which caught our attention; the black granite bowl with Arabic inscription. The presence of a Dargah within a temple complex was something I'd never seen until then. I also remember two more sculptures- a large coiled serpent and a woman in birth-giving position. It was rather embarrassing to see that sculpture in women's presence... ancient social life was a lot different. Then it was pure Hindu tradition.

December 23, 2014
A college day friend and I were driving down towards Bengaluru for a vacation. Our plan was to visit three historical spots on the way- Alampur, Belum Cave and Ashokan rock edict near Gooty. As drove down NH44, the first historical spot was Nizam Konda, an island fort in river Krishna. This is one fort on my list for a long time. Alampur village is about 200 kms from Hyderabad, 20 kms from Kurnool and 12 kms from NH44. By 8-30 we had reached the village, parked close to the museum.

The main attractions are  are Nava-Brahma Gudi the nine Chalukyan temples dedicated to Shiva and the Jogulamba temple. These nine temples were built by Chalukyan rulers during 7th Century CE. All structures are similar, made of similar looking sandstone, built on platforms and having a Rekha-Naagari Shikhara i.e. curviliner towers. One of the temple's Shikhara is missing. Architecture of these temples are exactly the same as of Aihole, Pattadakal and Badami in Bagalkot district of Karnataka state. Accoring to Chalukyan inscription found here, Alampur was known as Hatampura.

The nine temples of Nava Brahma complex are-

We started with Kumara Brahma Gudi, bang opposite the museum. Its design is similar to Huchimalli temple of Aihole. Built on a 3' platform the temple has a Mukha Mantapa, Sabha Mantapa and one Garbhagudi. The outside walls are plain; it has windows only on the side walls. This temple has signs of being restored recently.
To the left are Bala Brahma and Garuda Brahma temples, they are enclosed in one premises. Rituals are performed in Bala Brahma temple. The temple is completely surrounded by material such as wooden stands, metallic barricades and other stuff which create an eye sore.

This must be Garuda Brahma temple Mukha Mantapa. 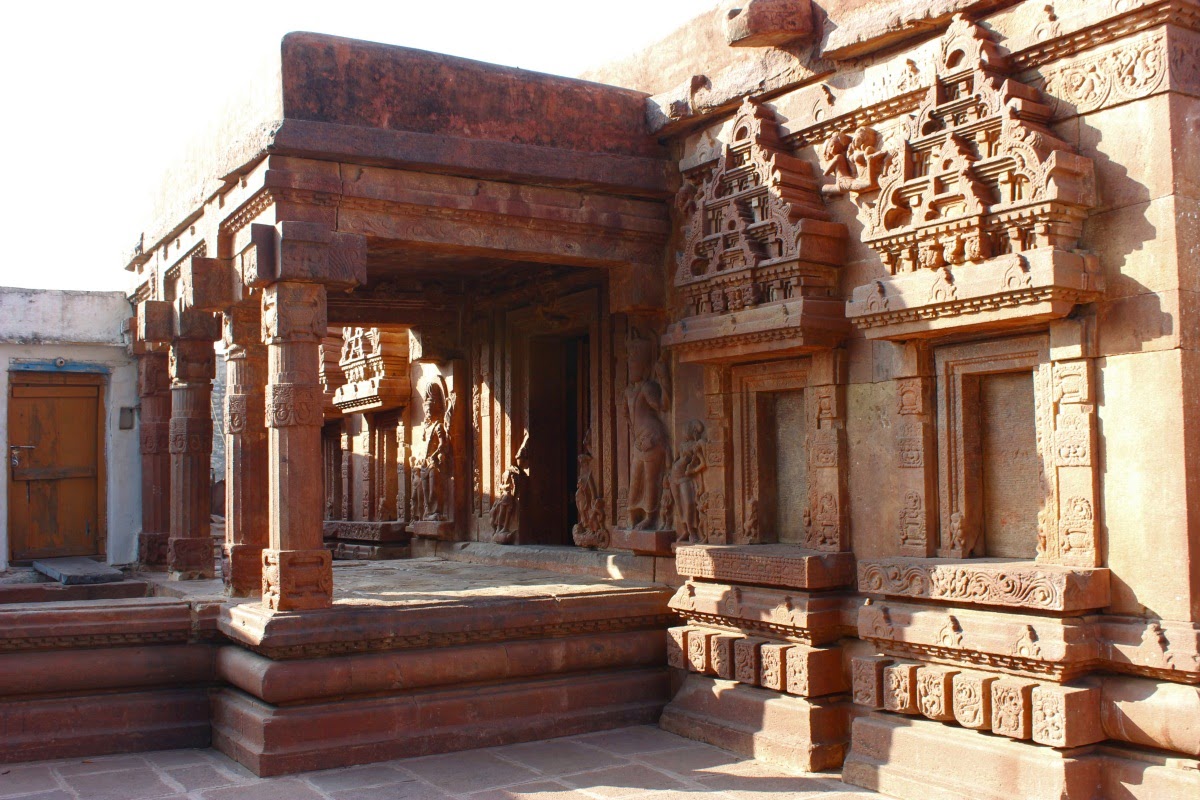 A slab with Kannada or Telegu inscription is found close to Bala Brahma temple. 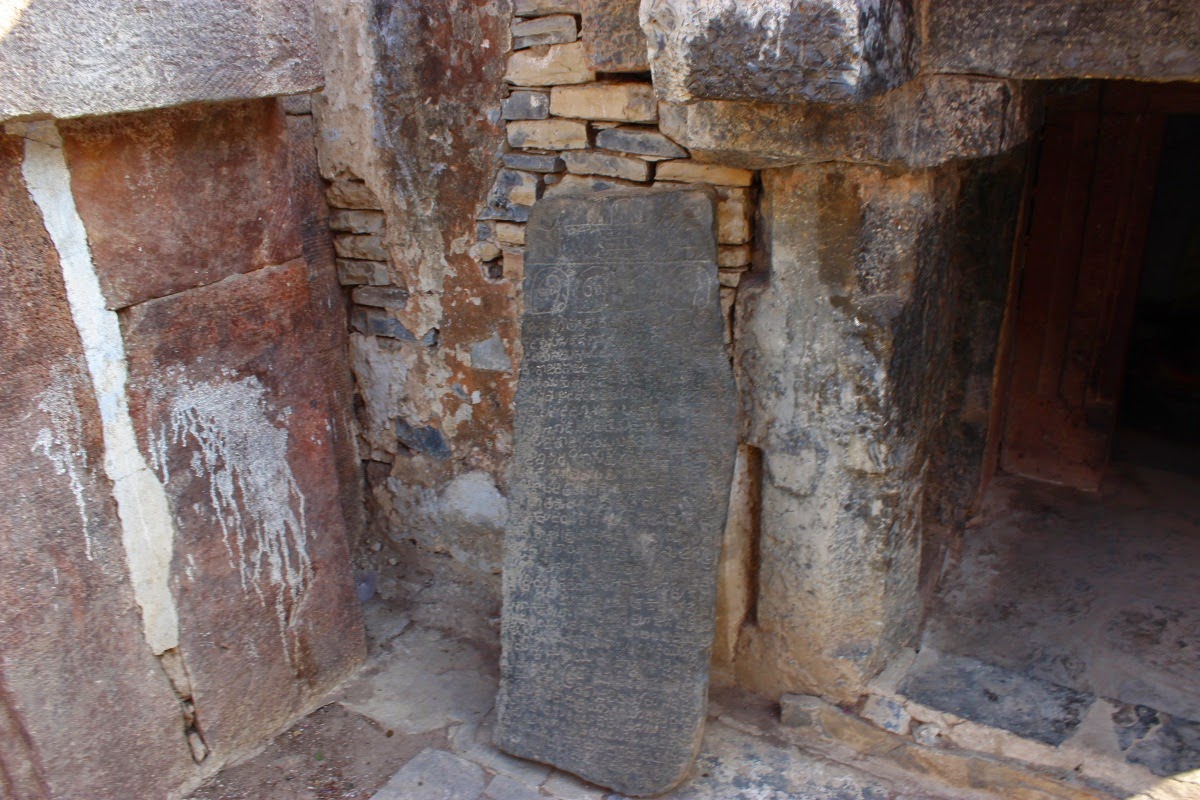 Next is Swarga Brahma temple. The very look of the temple made this my favourite here. Probably this is the most grand of all temples here. The Mukha Mantapa looks solid, its eight ribbed pillars create a rich look.

The pillars are unique in design, their tops and bases are cubical. The entire pillar is decorated richly with flower vases and floral art.  The rectangular block between the column and pillar have fierce looking keerthimukhas, they are staring our with popping eyes; expanded nostrils indicate the degree of anger. 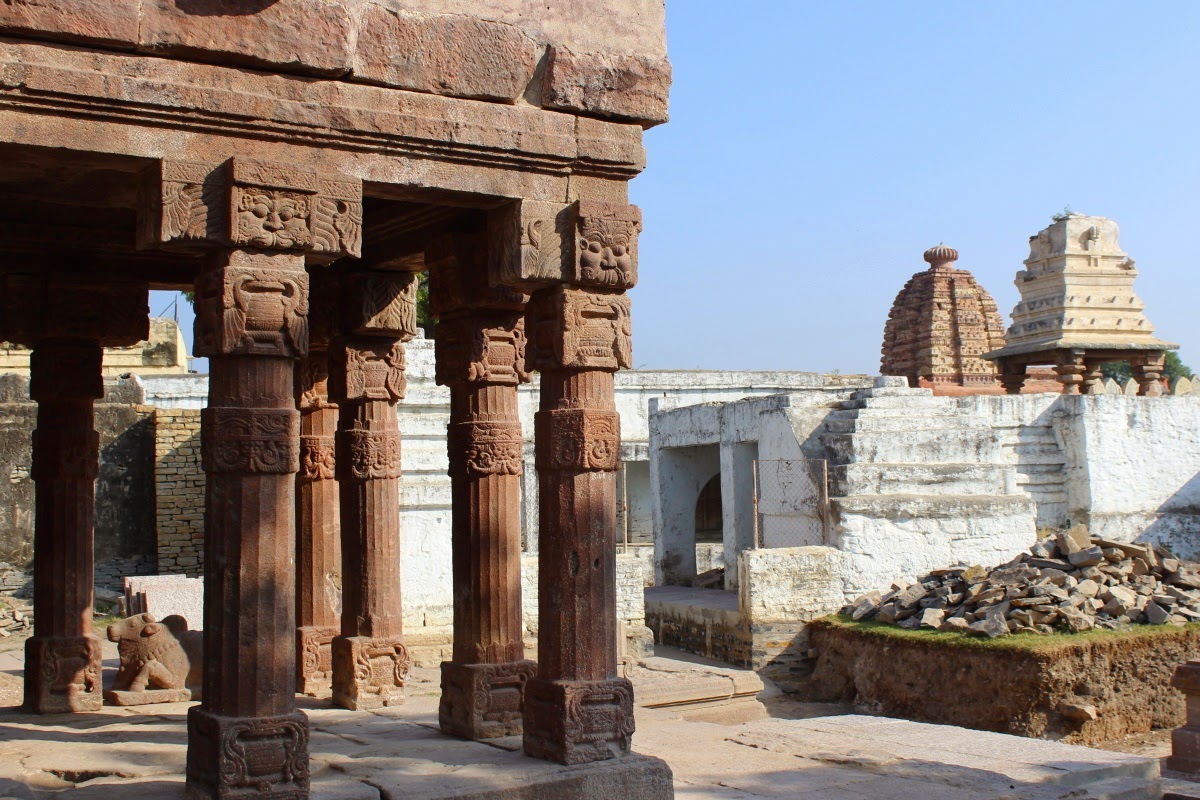 Unlike the other eight temples, Swarga Brahma temple's exterior is completely decorated with art of various forms- temple models, sculptures of gods and goddesses, images depicting stories of Hindu stories and even humans. A set of man-woman couples shown standing in various positions are simply beautiful, especially the one with a palm tree. On the right hand side of this picture is the scene depicting the story of Indra hiding in lotus stem. 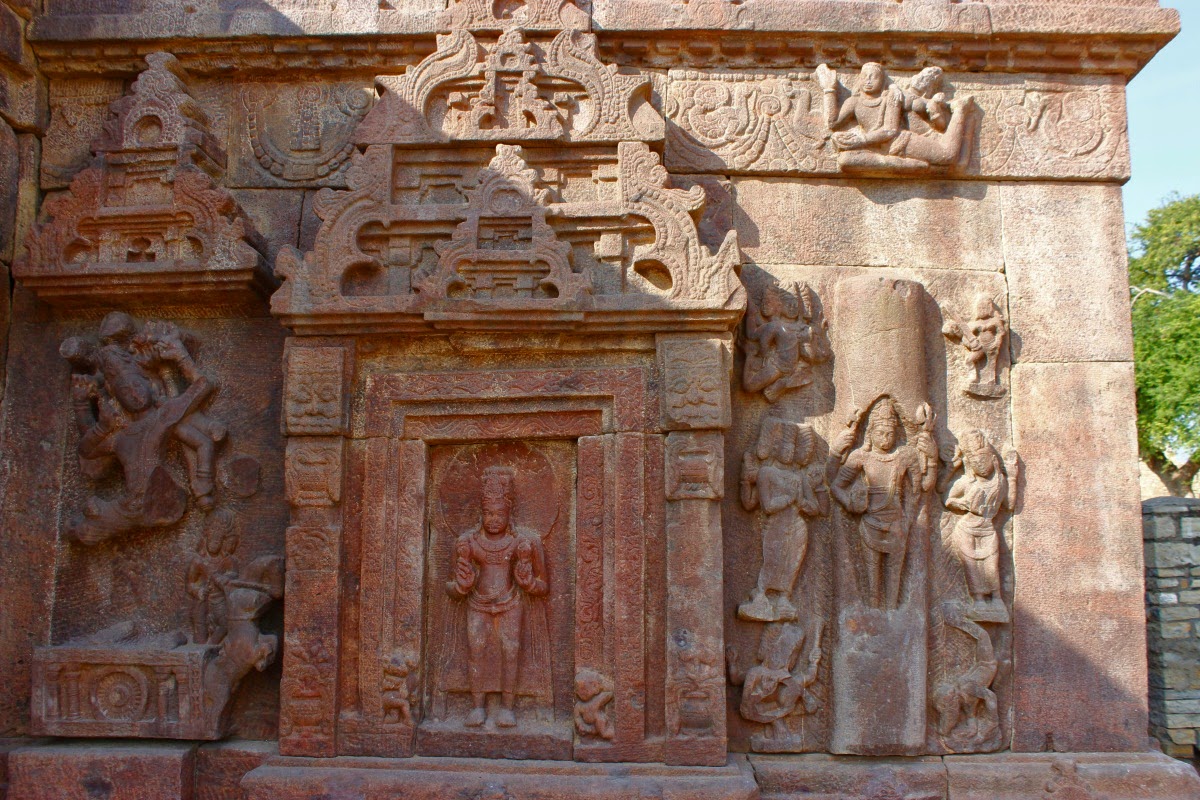 Padma Brahma temple's Shikhara is missing. This temple might have had a Mukha Mantapa in its original form. Since other 8 temples are all east-facing, even this temple must have doorway on its eastern face. If this, probably this is the only temple with more than one doorway.

Taraka Brahma Gudi is probably the smallest of nine. Its a stubby little structure with a Mukha Mantapa; its Shikhara is missing. The extra pillar in the Mukha Mantapa is an extra support to the beam above it.


Next to Taraka Brahma temple is the stone bowl with Persian inscription. The boat-shaped bowl is about 4' long x 1½' wide x 2' deep. The bowl's overall height above the ground is about 4'. There's no info as to when or who installed it. This bowl is taken care of by the Maulavi of a Dargah here. The Dargah building is also painted in the same green/red combination.


Besides the nine temples, there are several other structures of the same period. This gateway like building is known as Kanchi Kamakshi temple.

Other side of the gateway is a fort like wall.. wonder if Alampur had a fort. While the gateway is is a sandstone structure, the wall is a relatively new structure built of Shahabad stones. 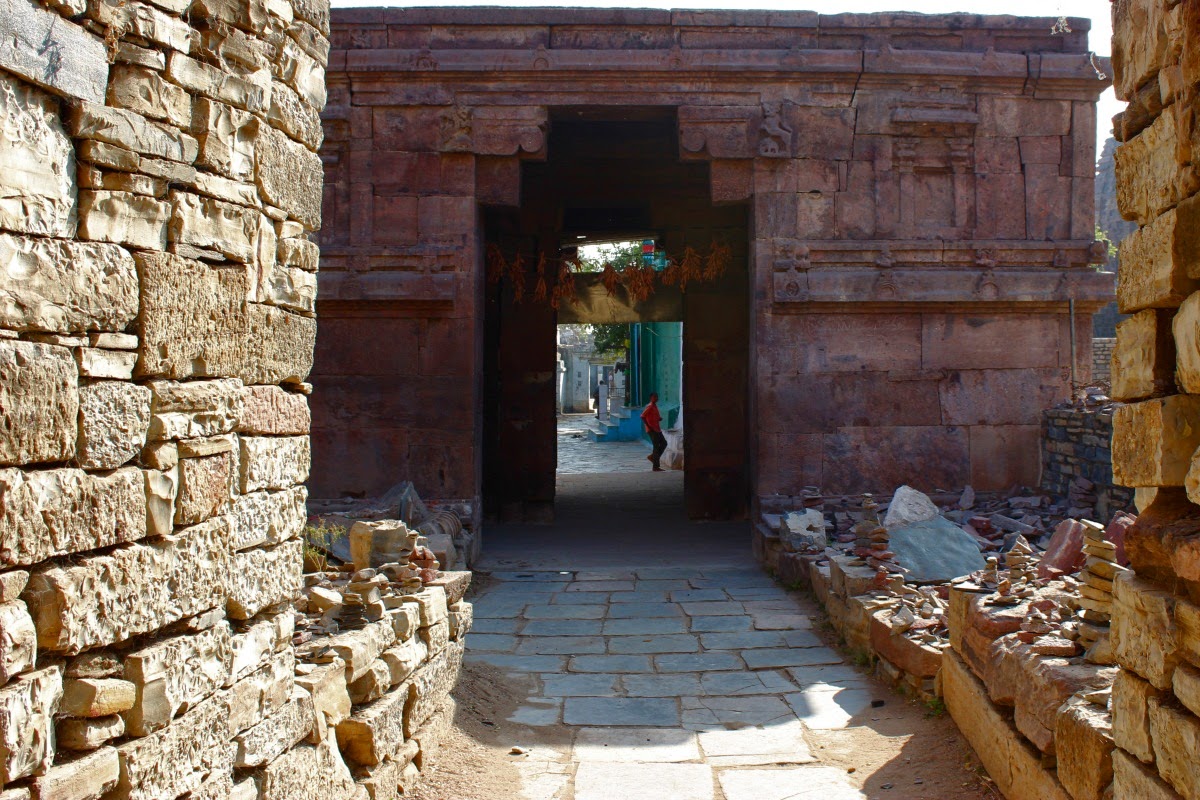 A small temple with stepped Shikhara used as a garbage dump. The tamarind  tree besides it seems pretty old, perhaps 300 to 350 years. 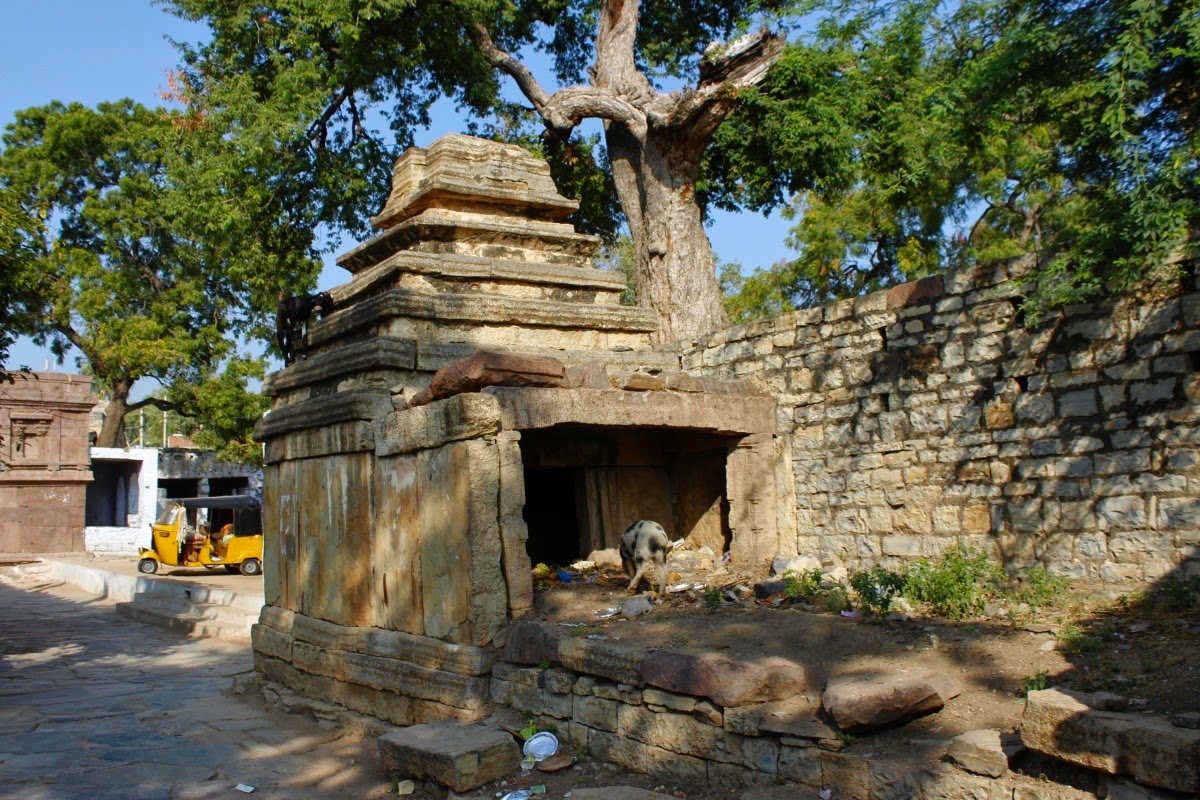 Close to Taraka Brahma temple is an open ground with a tower in the center. It is built of the same stone as Chalukyan temples, so I guess its of the same period. I did not bother to check the other side if it had a staircase leading to its top.

Adjoining the open ground are the last three temples. All these temples are similar in design, size and built on platforms. None have Mukha Mantapa. I guess Arka Brahma temple's Shikhara has gone missing.. that brings the total to 3 missing Shikharas. Opposite Arka Brahma temple is a badly damaged Basavanna.

Veera Brahma temple's exterior has more number of niches modelled like temples.
Vishwa Brahma temple has even more number of niches than Veera Brahma temple. This structure seemed to be well preserved. The Shikhara's lotus shaped crown is intact. Of these nine temples rituals are performed in may be five.
Jogulamba temple is a new building, probably the old structure was replaced with the new one. In fact most tourists' intention of coming to Alampur is for Jogulamba temple. It is considered as one of the eighteen Shakti peethas. Jogulamba is also known as Yogulamba or Yogamba.


Done with temples. The historical museum wasn't open yet and we were not ready to wait. We had barely driven 200 meters from the parking, I saw a small eatery "Hotel Padma." I liked the place by the first look. Guru was hesitant, I urged him to try.. yes, food and service was good. Guru was surprised seeing the bill :) In the restaurant was a photo dated October 4, 2009 showing the place submerged in flood waters. 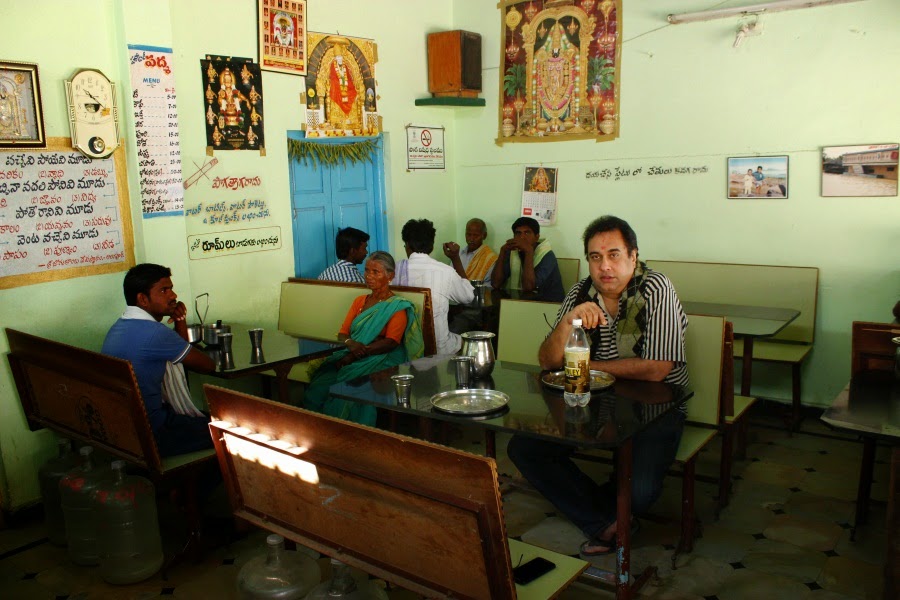 My plan was to see Sangameshwara temple on the way back towards the highway but we completely forgot about it. This picture below was shot during another trip. During my maiden visit, the care-taker had told this temple was relocated. I guess it was situated near the confluence of Krishna and Tungabhadra rivers. Since a dam was constructed and the reservoir would submerge the temple, it was dismantled moved to Alampur. Great job by those who carried out the project.

Excellent info Siddu. Never heard of this place before.👍👍

Again congrats on keeping a steady flow of info on this blog.

Just about 7 kms from Alampur is a village by name Gundimalla ( or Gondimalla ). This place is known for the Krishna-Tungabhadra Confluence. There is a temple for "Bala Jhunkareshwari" at the edge of the village. Located on a slightly elevated place, it offers a panoramic view of the confluence: http://sanitybrigade.blogspot.in/2014/10/gondimalla.html

Excellent blog posts by you and very regular - thank you.

Thanks you, Subbu and Captain Flint.