Part of the team in line formation lead by Venkat followed by Vivek, Vijay, Mogili, Nagarjuna, Gaurav, Hari and the back is Kamesh. Venkat made sure the team was in high spirits :) 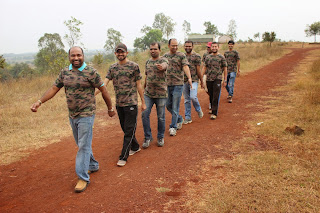 Group rushing down the treacherous slope.. it looks pretty safe but it really was steep and slippery with loose dirt, pebbles and earleaf acacia leaves. 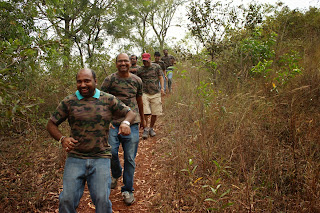 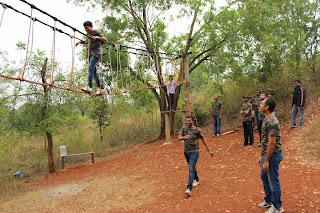 Coming to swinging planks, this is one tough activity. Moving from one swing to another is tricky but Nanda and few other guys made it. 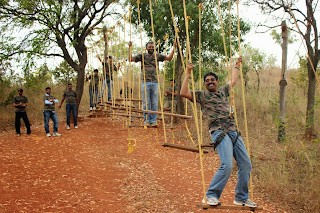 That's it for first half. We'll be taking a long break for lunch. The dining area was rustic too, pretty basic. Lunch was simple but fresh. Again Venkat made sure all of us sat together. 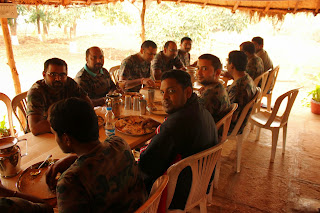 For group activities to start, the first step was to divide the group into two. Leaders were chosen- Nanda and Sasi. Hamid decided which member went into which group. I was in Nanda's team but would not be participating until required to - had my job to shoot. Sasi chose 'Tigers' as his group name. and Nanda/Venkat reacted with 'Lions'. So it was Tigers versus Lions now. 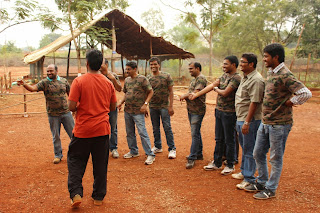 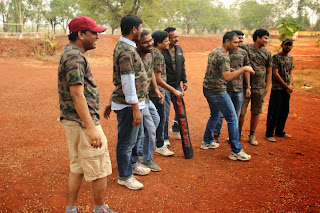 The first activity was rope-walking. This was a timed game, the entire group had to walk the rope as quickly as possible but the catch is- no more than two members on the rope at any point of time. The contest began, each group did its best to distract the opposing group while they walked the rope. It was lot of shouting.. I think it was Tigers won it by a good 30 seconds. Lions 0 and Tigers 1. 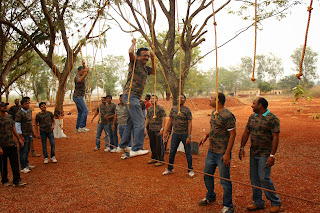 That's Ravi offered his services as an object-keeper (members had to take off glasses for the next activity). Gangadhar, the chief organizer was temporarily handicapped by a leg injury. 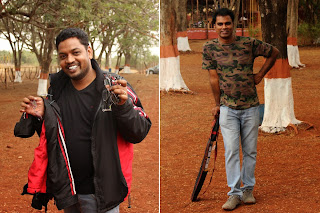 The next activity was 'Passing the Ring', also a timed game. Each group had to form a circle with their hands held firmly. A ring had to be passed around the group without using hands. Teams were given two practice rounds before the live round. Tigers won this game and someone from Lions passed a remark "this is ladies' game." So the score was Tigers 2 and Lions 0. 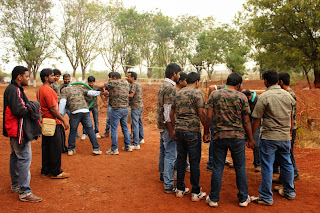 Next in line was plank-walking, this would be a race. Group of 3 members standing on a pair of planks have to co-ordinate their feet movement as though they were walking as one. During the practice rounds, I think someone lost balance and landed on the ground. Not an easy activity. This interesting race was won by the Lions. Tigers 2 & Lions 1 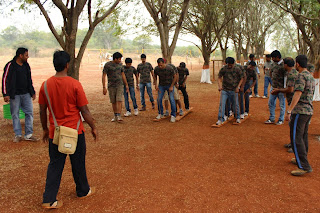 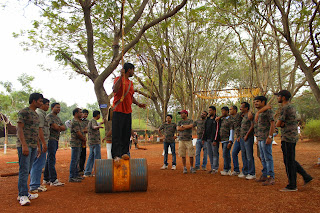 The final activity was tug of war this would be deciding the winner. Now, Venkat got into serious action. I had to join the Lions, handed over my camera bag to Ganga. Venkat kept charging us, he wanted the team to be primed up, he was in mood to lose. Sasi was also charging his team. Hamid the referee was struggling to keep the center cloth aligned to center line. The moment he uttered "GO"..both sides pulled with all their strength, the first few seconds were tight, but Lions had the grip and tugged real hard.. 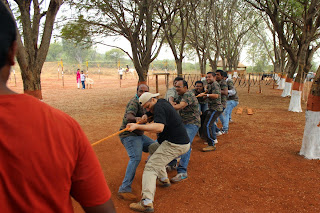 the Tigers were pulled like lambs. See how the Tigers let go the rope :) Victory to the Lions! 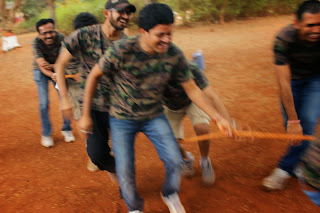 As usual, after a contest there was cheering and booing :)

Done with group activities, our co-ordinators took leave. We had a short break for high tea and the next 60 to 90 minutes was volley-ball. It was really nice to watch the game, both sides played well. The game was played well into dusk. End of the day. 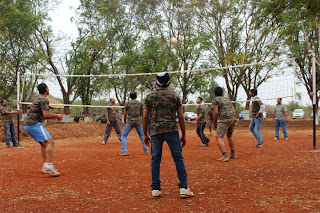 We had checked into our two cottages earlier. The gang freshened up and assembled at TT court/shelter for a party..*@^!*&(*#(^#^($((%^#*(^($^(!^(@^(#$!@(#$(*^&..almost 11PM when we went for dinner. Post-dinner all were supposed to assemble for bonfire and dance but only half the group was present.. rest were in dream world, Music was not permitted so it was just sitting and chatting. I think. Ravi arrived late at the bonfire and he did something wild.. rather not describe his actions. With a mild breeze blowing. weather was pleasant.. it was almost midnight.. I was tired.. wishing I could stretch on a bed and shut my eyes but there was another 'activity' pending.. 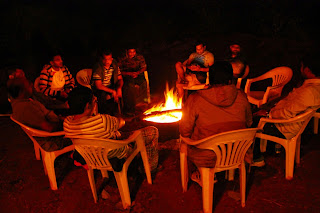 Game of cards in the cottage started with a group of 3 people which grew to 6 or 7 quickly. One of the younger members instantly found the game interesting. Wow, the magic of cards! Incidentally, the tee-shirt I'd worn had a anti-cards message on it. Cards went on and on,. it was around 2-15 AM when the lights were turned off.

A jungle walk had been planned for the morning. I was kind of worried if it would really happen.. would be sad if we missed it..