Dec 30, 2012
Gulli, Deepak and I were on a day trip,my plan was to see two of three forts.. Madhugiri, Channarayanadurga and Midigeshi. That was the day Thane was blasting India's east coast and its effect was seen in Tumkur district. Sky was laden with dark clouds, constant drizzle We started with Madhugiri.. as we went higher up the monolith, fog got thicker, visibility became shorter, windier and colder. It was Deepak who lead, if not for his earlier climb we would not have reached the summit. Descent was slow because of wind, our energies sapped when we reached the base. Lunch was mudde-saru at a small eatery. It was my suggestion we head towards Midigeshi, purpose was to preview the hill.. only the base was visible, the top was shrouded in mist. On the way back we tried to locate Channarayanadurga.. it was interior.. we dropped the plan. We reached Tumkur outskirts, stopped for a while, had fresh n hot tea.. it was amazingly refreshing! With our energies recharged we cruised towards Bangalore chatting away noisily.

Dec 28, 2014
Left Tumkur early by a cab, drove via Kortagere and reached Channarayanadurga by 6-15, its a small village right besides the bill, at the village square people were huddled around small fires, some smoking beedi or sipping tea. As usual I spoke to people and found a guide. Eranna was picked  as my guide. That was quick, no waiting time at all. We started climbing.. I remember reading.. the climb was steep at places.. true it was steep but the surface was friendly, it offered superb grip.. as though it held you firmly. Eranna was nimble as a goat, he climbed as though he walked on plain land.. 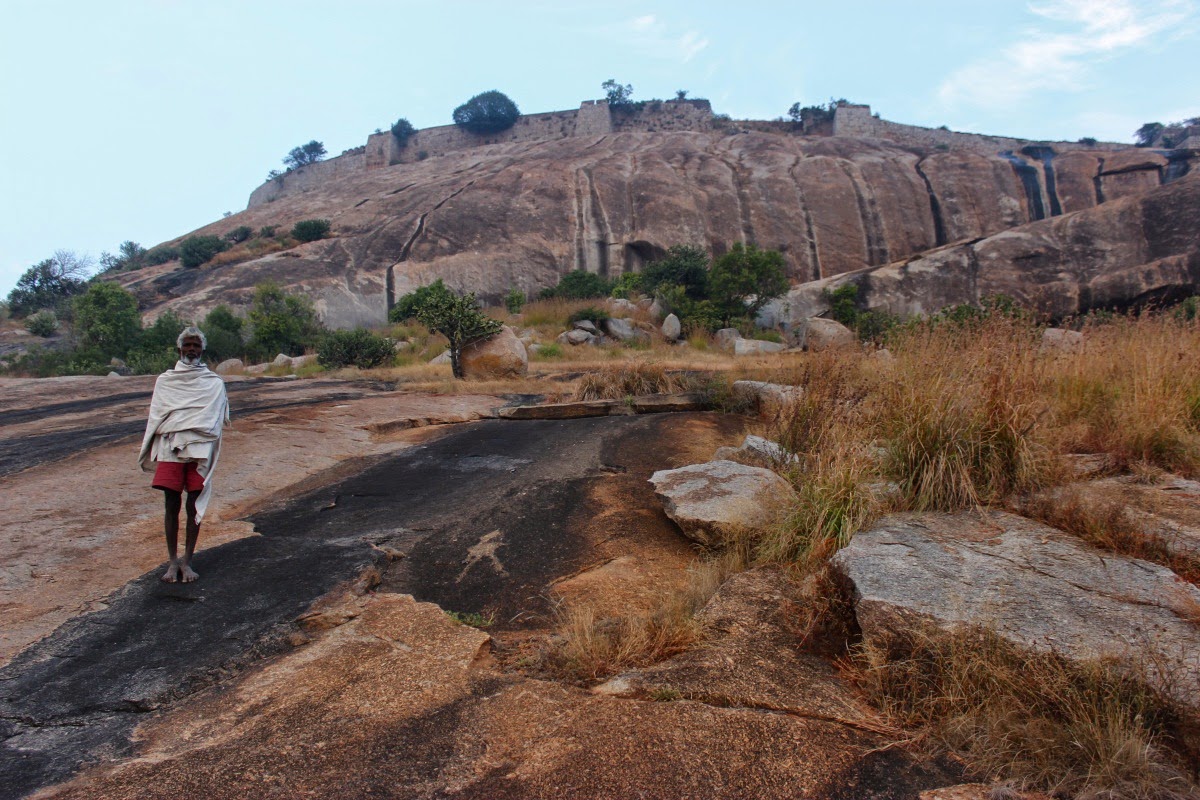 Eranna told this is where the 1980's Kannada movie "Bangarada Jinke" was made. He was a kid when the movie was shot. Ropes were left down the slopes so that actors could climb easily. Eranna told this is the spot which is shown as a cave entrance.. the dark space between the rocks was the cave's mouth. Eranna insisted I take pictures of this spot.. "people came from far places to see this place" he would say. 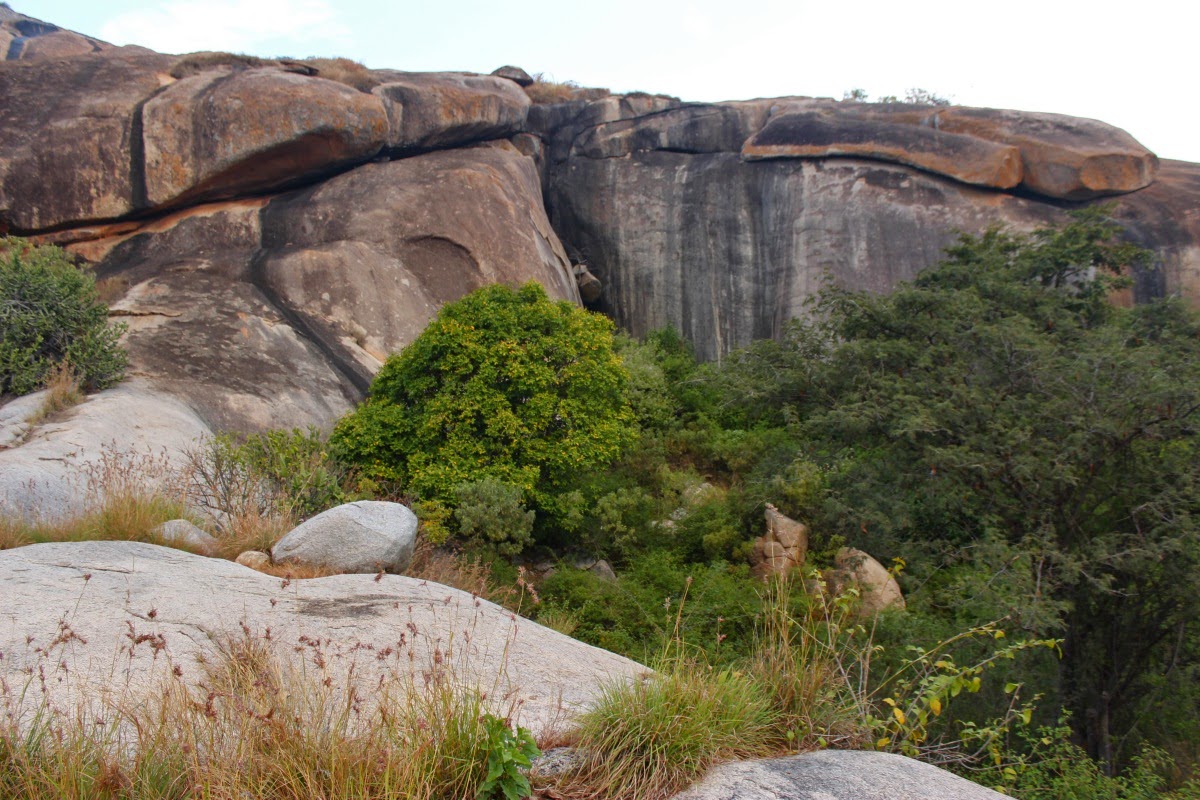 Eranna suggested we go right up to the cave's mouth, seeing the vegetation I decided we skip it. 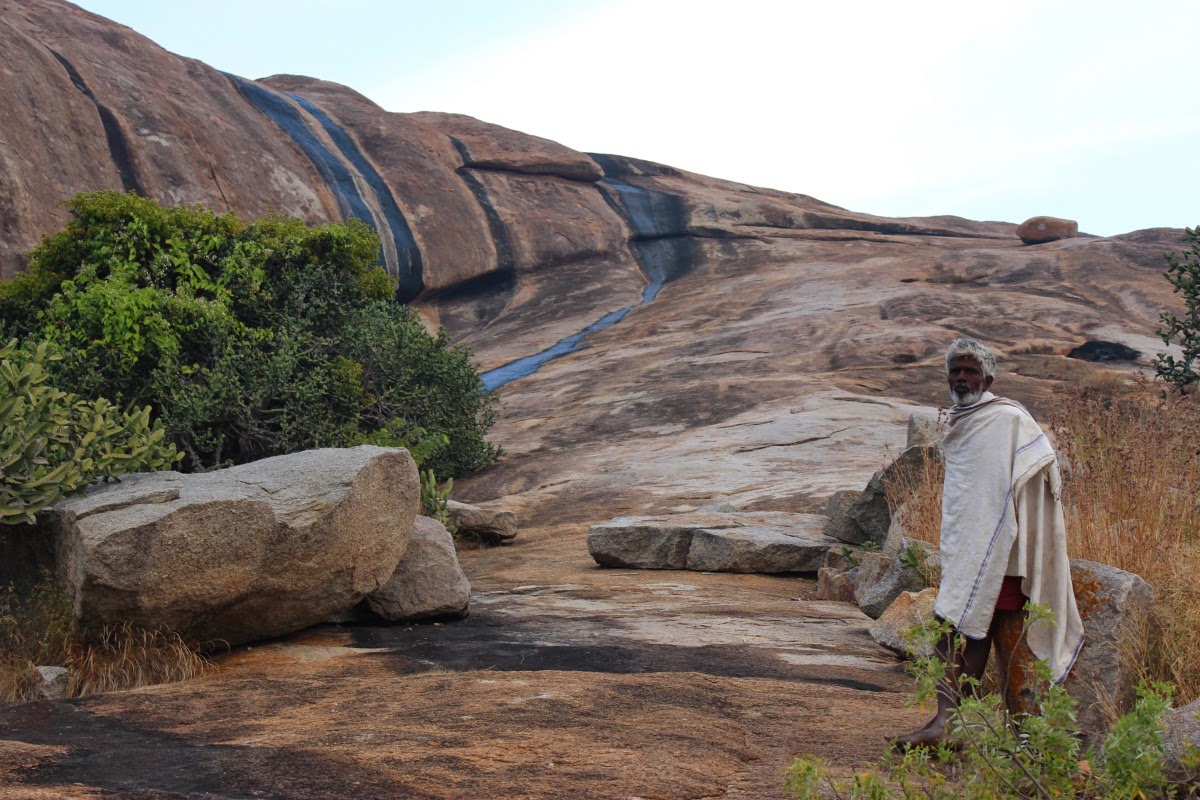 The air was cool, mild breeze blowing from east, cloudy sky with golden rays escaping from the gaps. We got closet to the fort wall. Eranna said the wall seen here is just the beginning.. we still have a lot to climb. Tracks of slow flowing streams in different colors.. strokes of nature's paint brush. 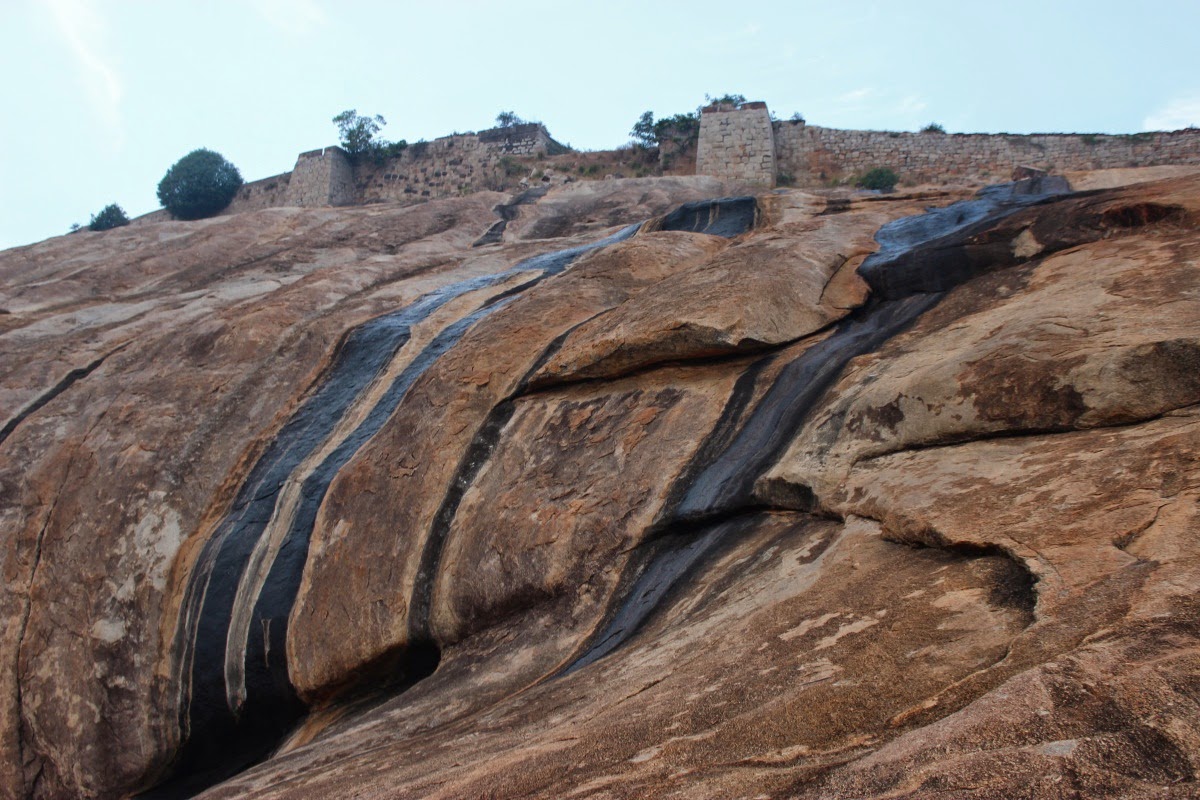 Besides tracks of uniform width we have varying width too like the one seen here.. this one looks more like a river and reservoir on a map. Also tracks are of two types- gloss and matte. In this view the fort's summit is peeking up from the wall. 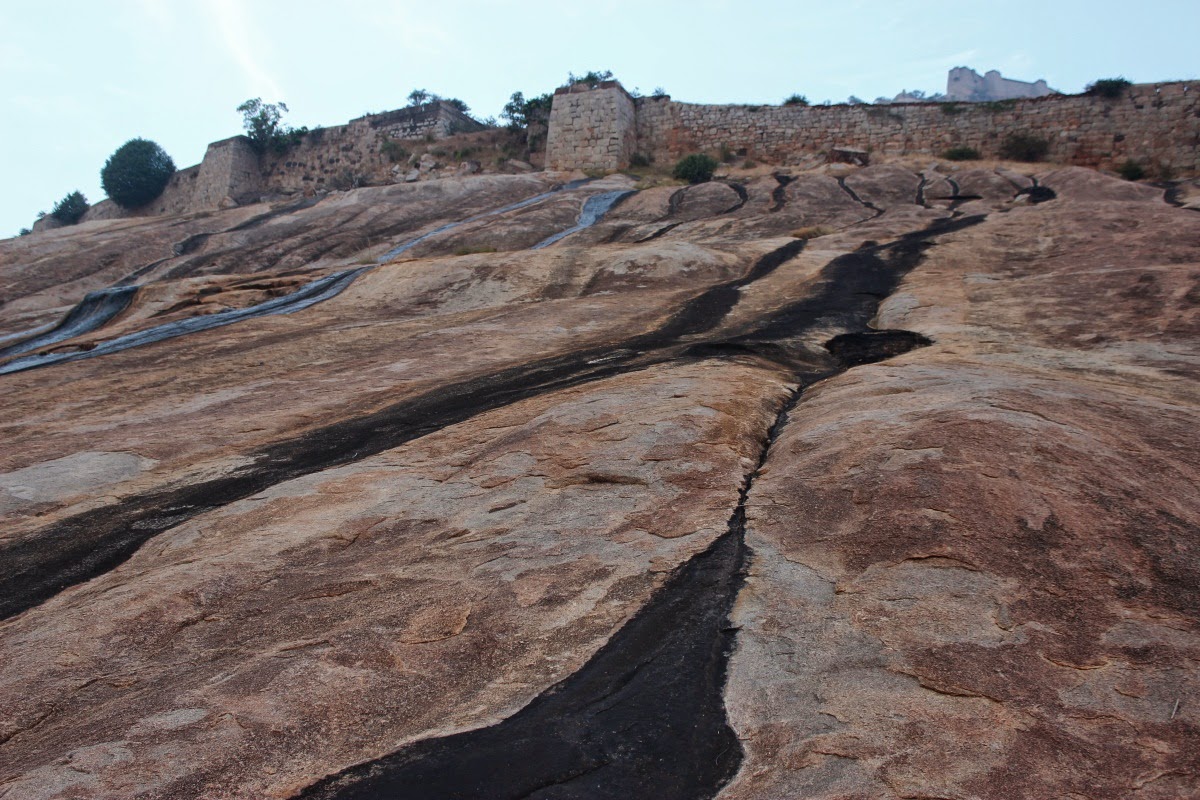 We approach the first gateway on the hill, long back there could have been one near the base, in the present day village. 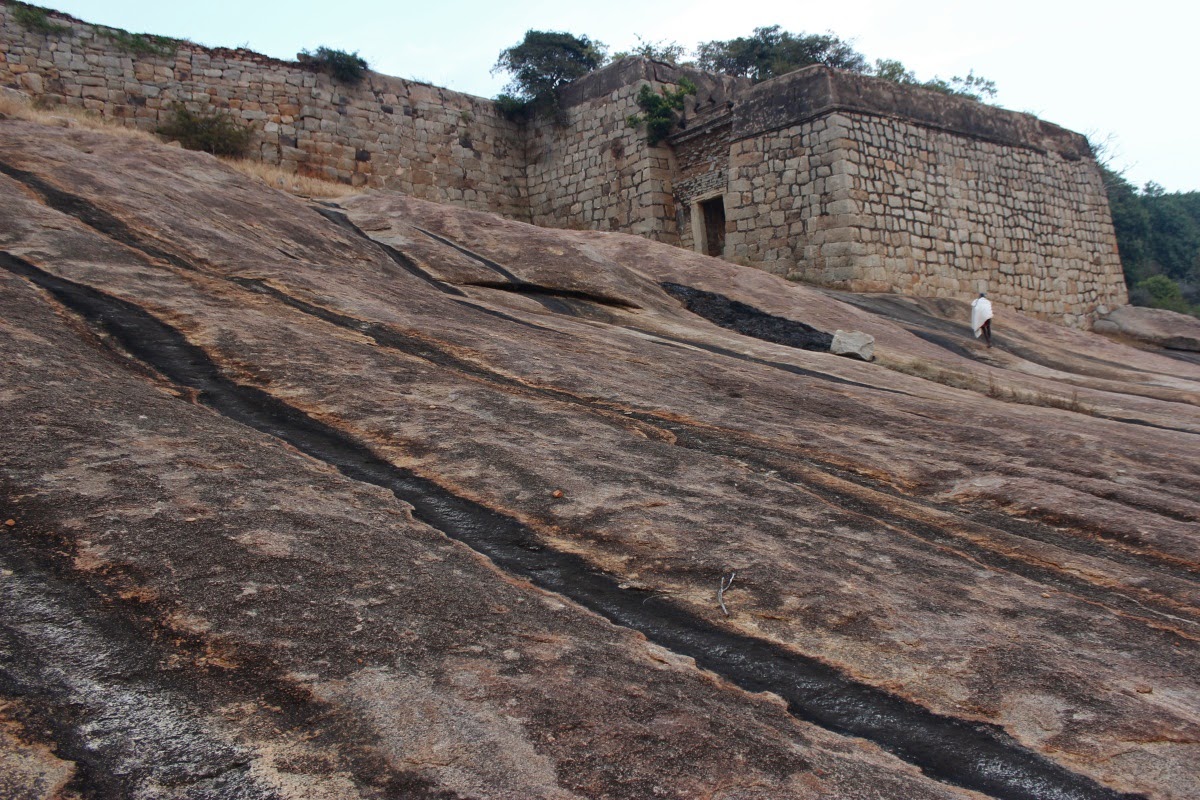 Sources say Channarayana Durga was built in the XVII century CE by a feudal king from Madhugiri named Channappa Gowda. It was also ruled by the Marathas, Wodeyars of Mysore and Tipu Sultan. Close to the doorway, as you enter the fort, on the right hand side is an inscription in Devnagari script. In the first line, one word is 'Chandrayanadurga.' It is possible the inscription could be of Maratha period. So, was that the original name? 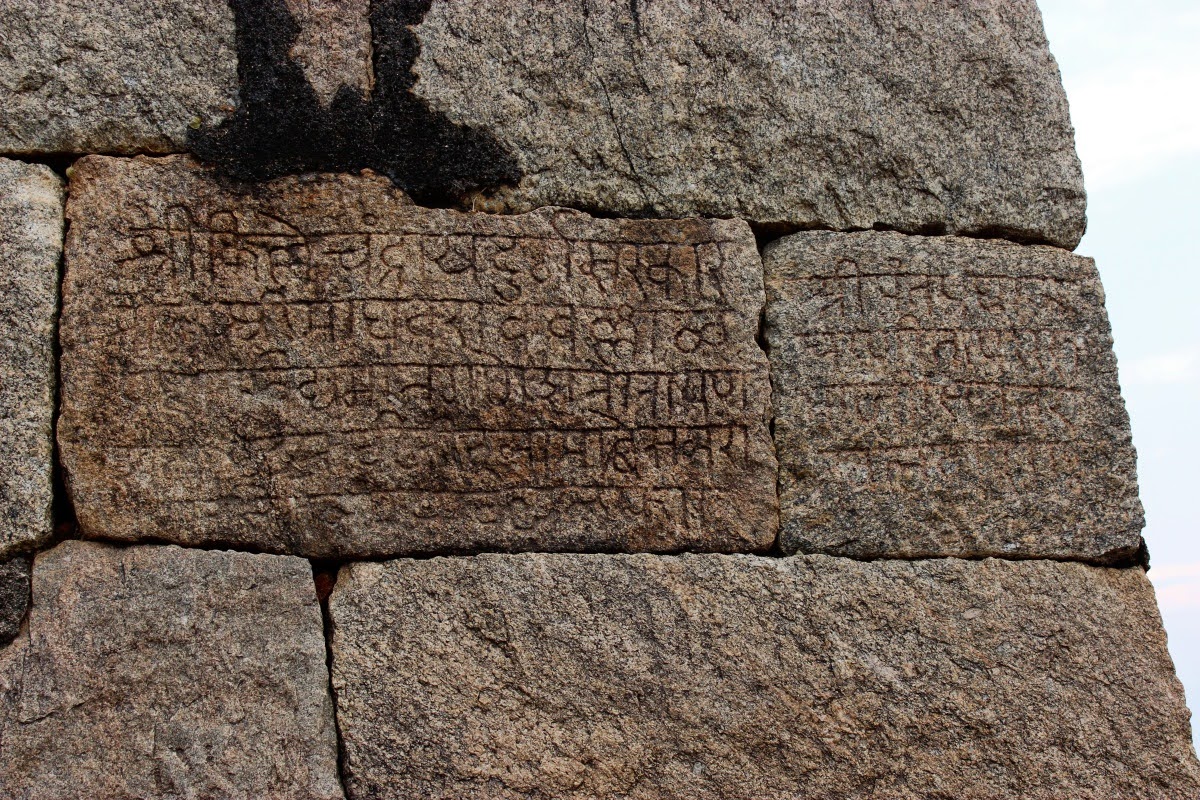 Close the entrance are groups of vertical lines which I believe are workday records of a person who was involved in construction work. Another marking seen close by was a an equilateral triangle accompanied by intersecting lines. I remember seeing a similar drawing at Chandragutti fort and probably at Nidgal fort too. 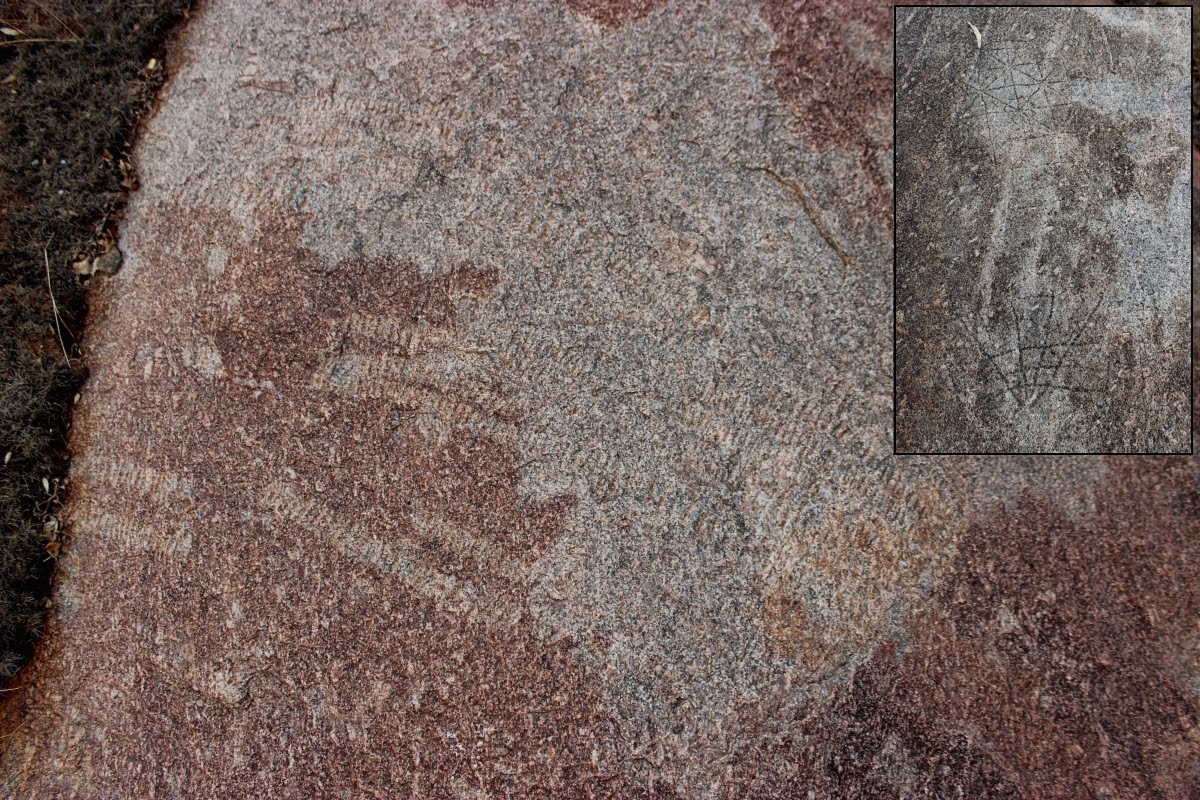 As you enter the gateway, its a curved path, a standard design to slow down (or confuse) enemy entry. Eranna waits at the doorway as I shoot. Notice the doorway arch, its Islamic, Tipu's signature on forts. Remember seeing this arch design in Gooty, Koppal, and many other forts. Just like other historical spots, I could treasure hunters handiwork here too :( 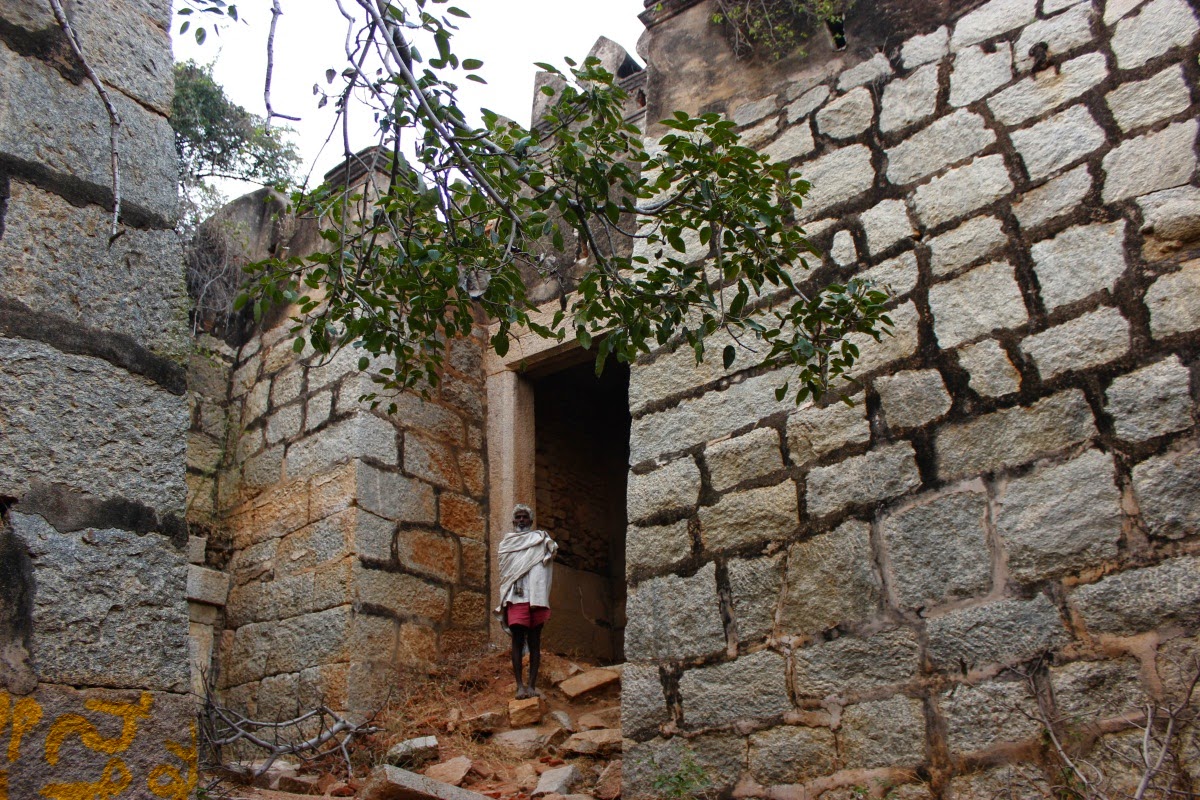 The gateway interior.. built to be cool in summer and warm in winters.. a platform which works as a security office. 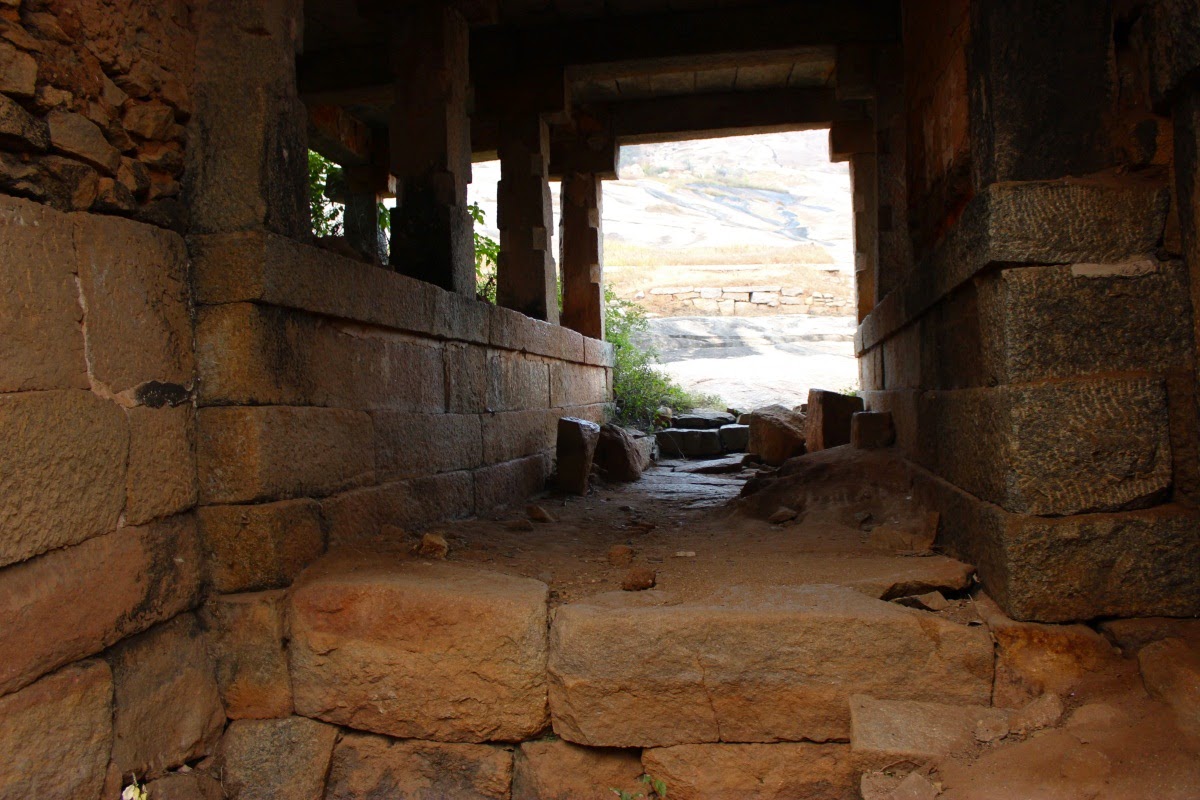 A short climb from the gateway are several structures.. a temple, a granary, and a water tank. Water looked fresh and clear. This scene immediately reminded me of the water tank at Savandurga. Cracks in cloud screen had widened, golden and pink background was visible. 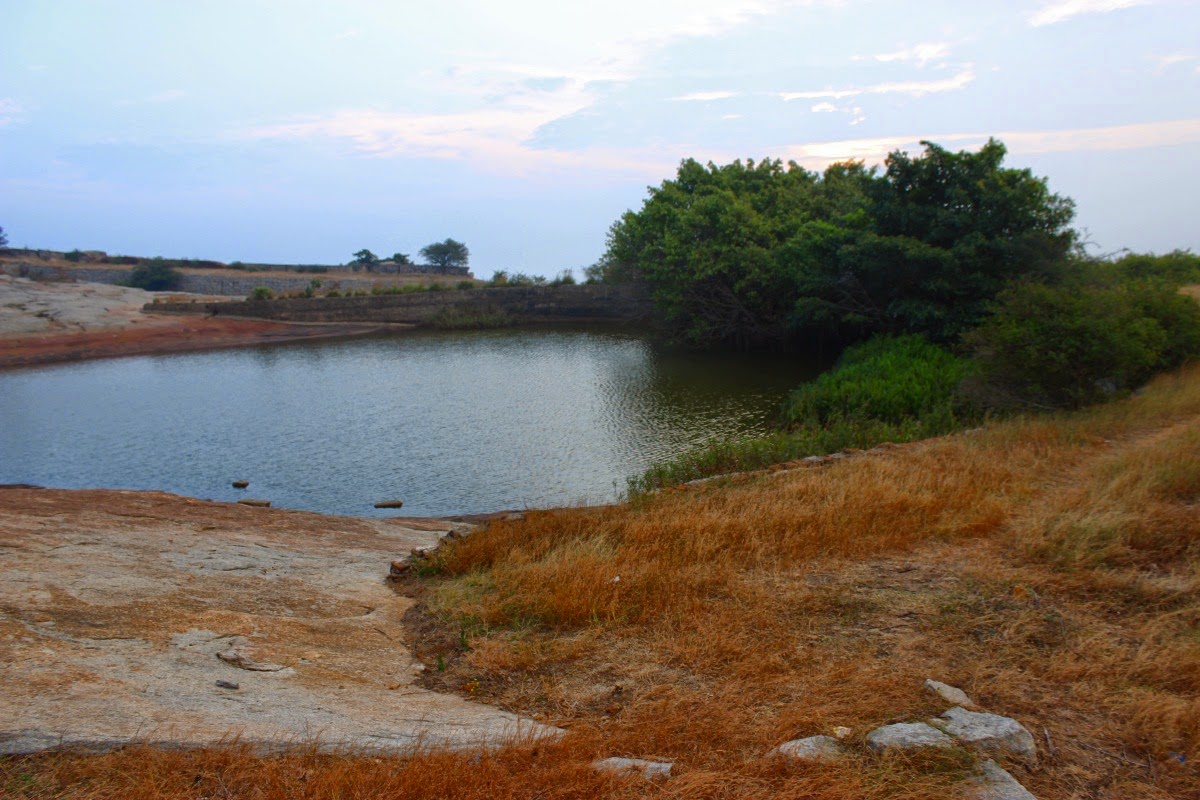 We have a long way to the summit.. with several stages and gateways in between. 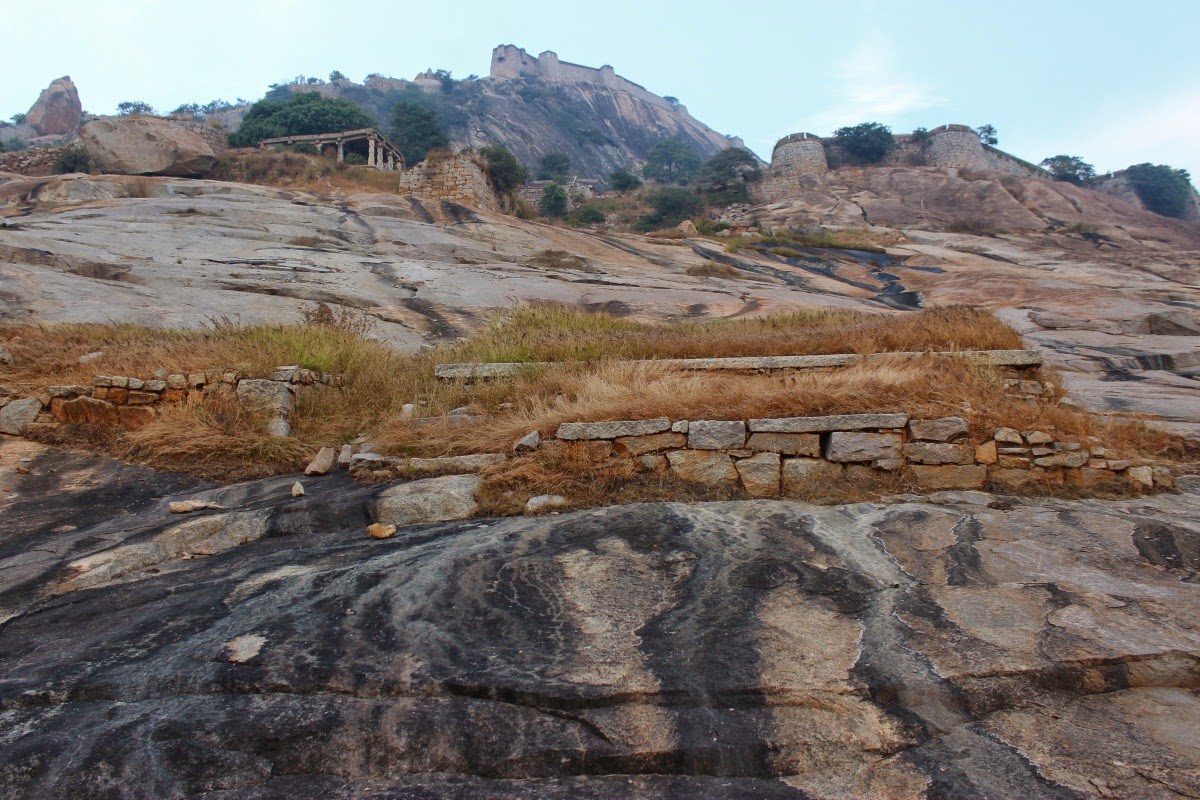 An east facing temple, seems like Vijayanagara architecture but may not be of that period. Unlike a traditional temple, this one doesn't have a Shikhara but it has a terracotta crown. It is quite common to see terracotta crowns in Tumkur district, especially temples close to forts. The temple has two parts; a Sabha Mantapa and Garbhagudi. The sanctum's entrance is flanked by two characters holding trishul and damaruga (trident and hand-drum). I don't remember seeing any idol inside rather the interior was dug out :( Right behind the temple was a cylinder like structure built of dressed blocks.. I guess it was a granary or it could be used to store arms and ammunition. 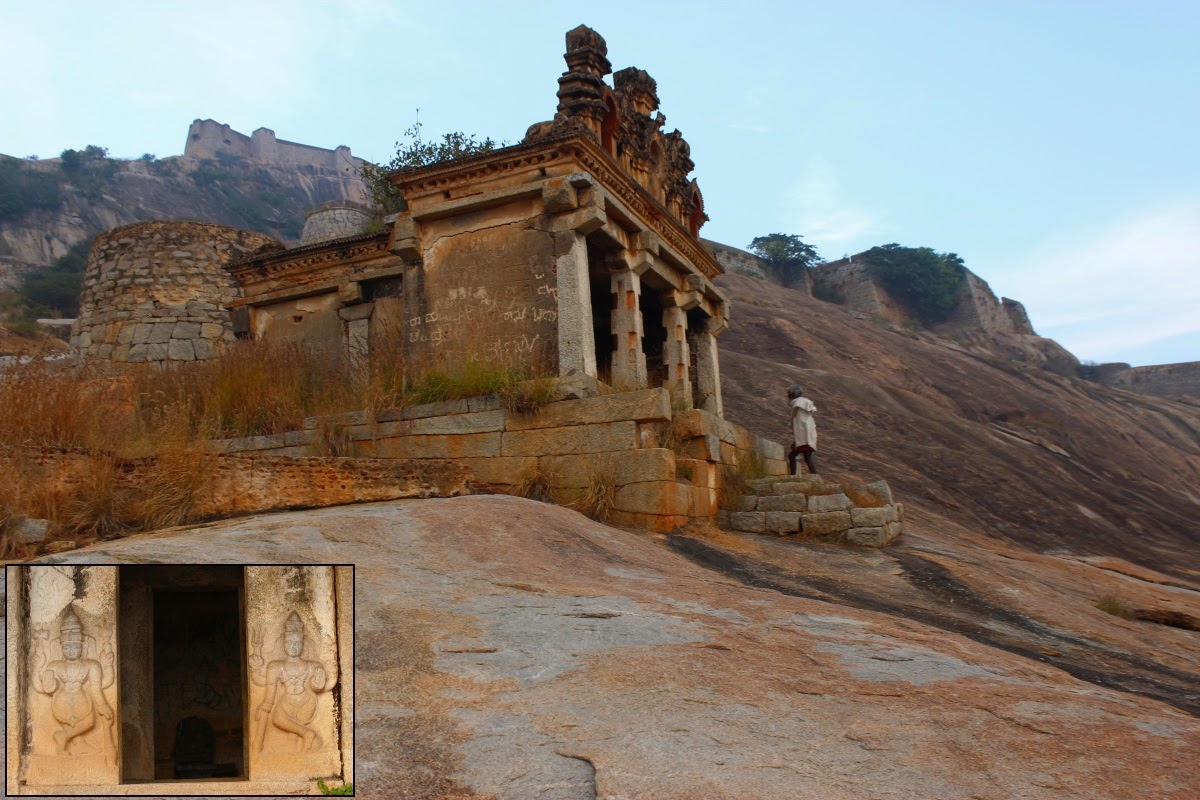 View from across the water body. In the background, slightly to left of the temple is another temple.. scanning to the right.. is a gateway. Up the hill,at the mid-level are bastions and walls. The summit level is also clearly visible. across the waterline is a red patch.. 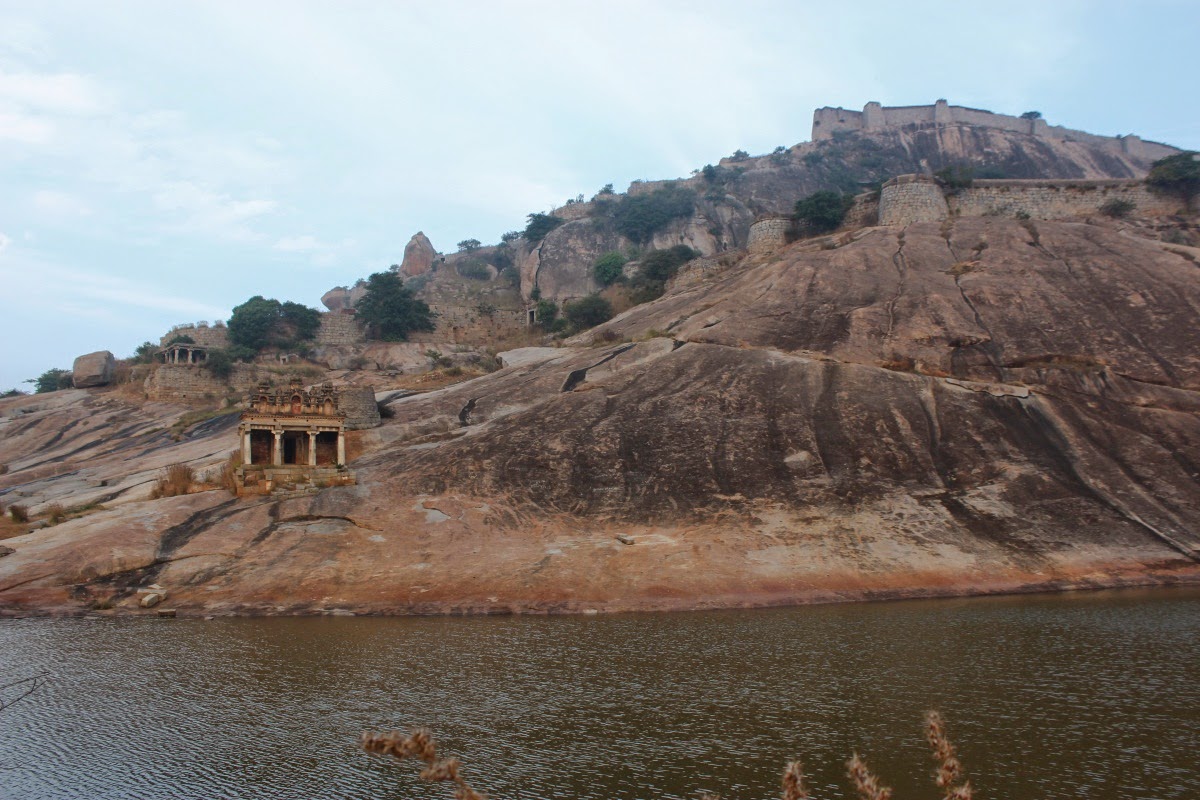 We move up to check out fortification on the right. A group of bastions and walls secure this part of the hill. There's a four pillared shelter which might have been a security office for this part. In the foreground, just ahead of me is a large red patch with flow lines.. doesn't it look like blood? I could see many such patches. Is it an indication of richness in iron in this stone? 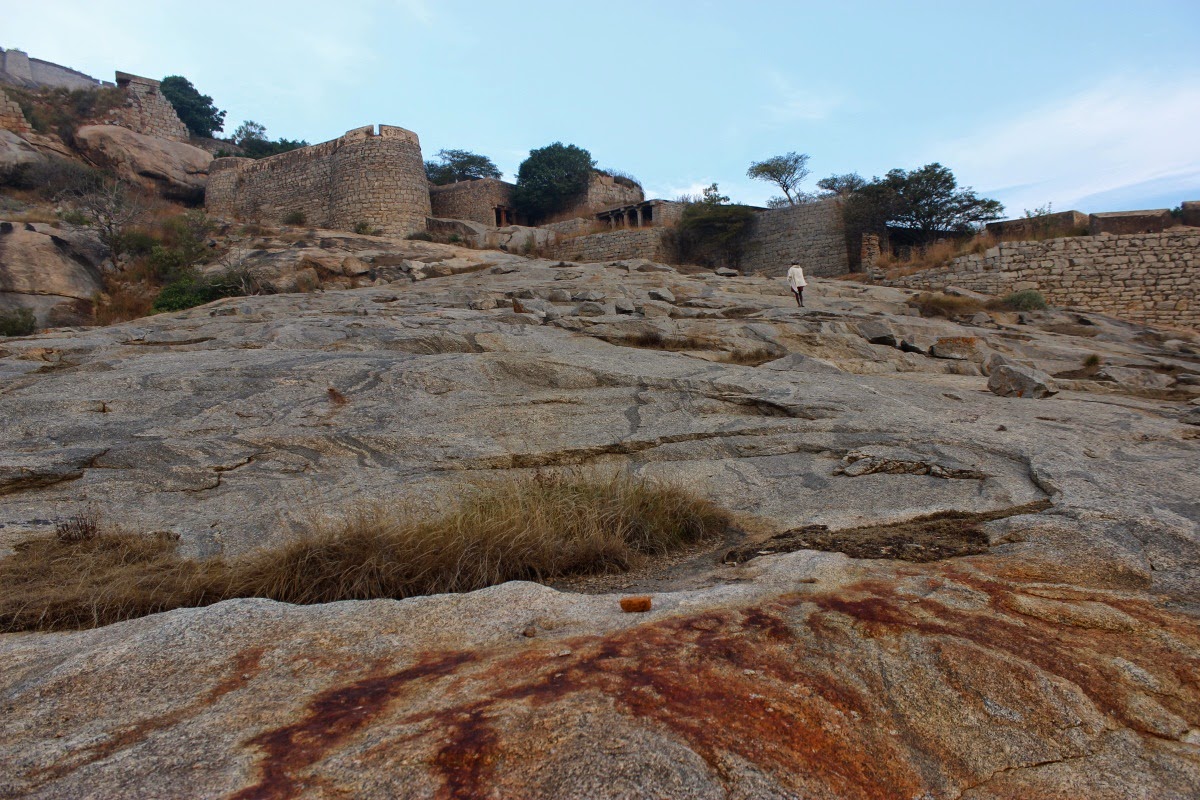 Eranna said there's nothing much to see here and also its a dead end. However we went up.. those walls were created to stop any attack from this side. These bastions provided a good view of this side of the hill. The reservoir is triangle shaped except the sides are curved lines instead of straight lines. Sky was clearing rapidly, it was blue sky with scattered white clouds. From where I stood, just behind me was a rampart wall. 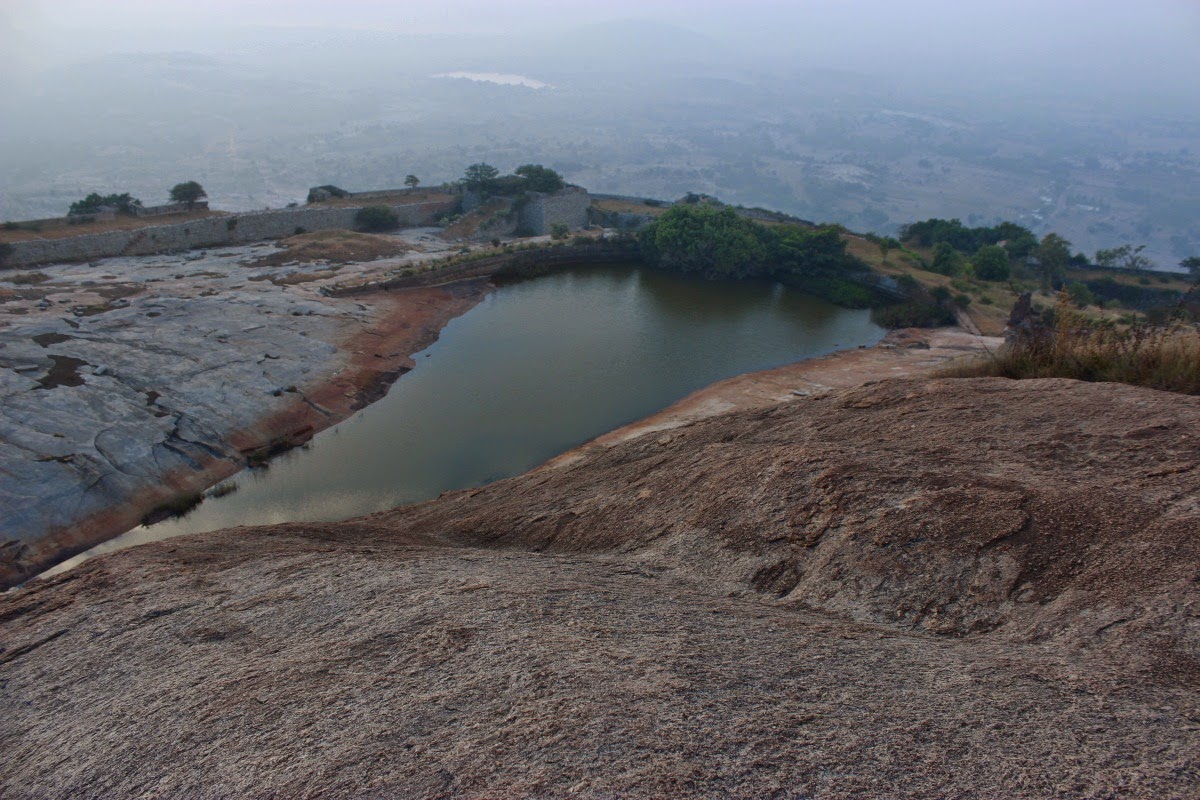 Eranna suggested we walk along the wall to the gateway to the next level. Looking back the way we came. We looking towards north. A short distance from here was the gateway. 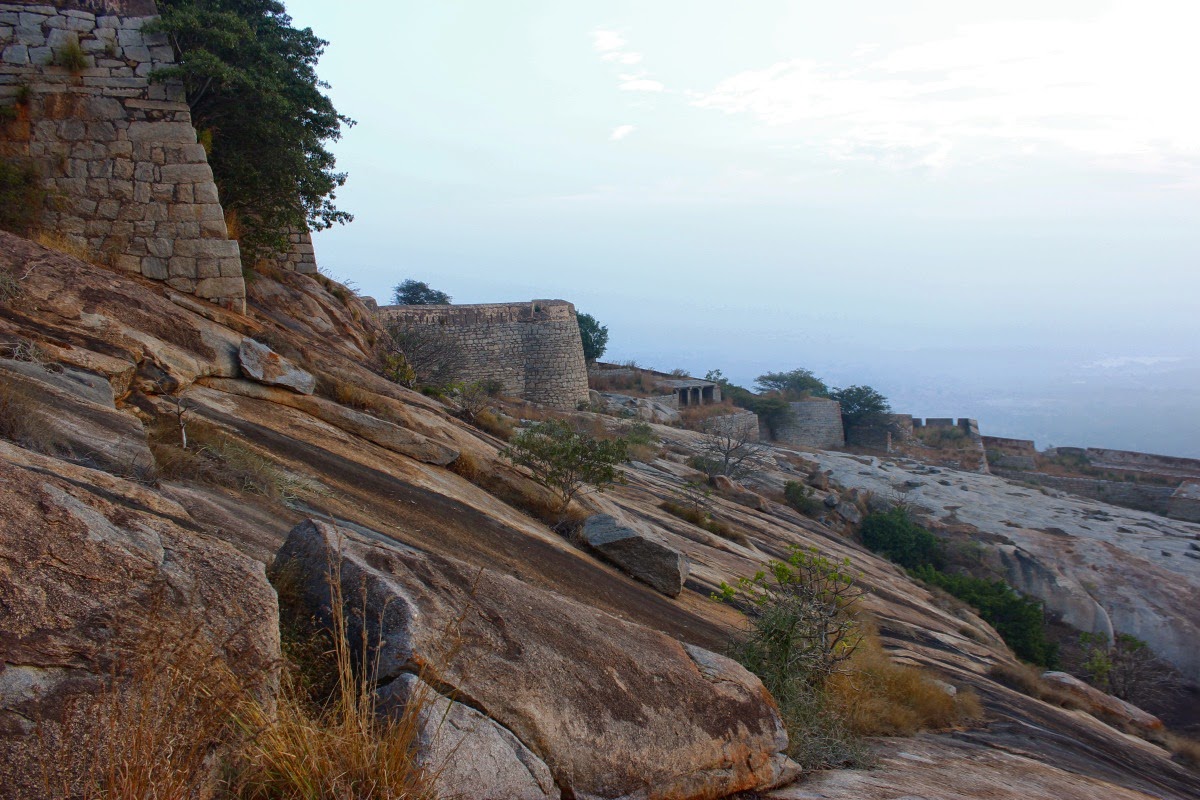 Looking down the slope.. the temple on the right, first gateway and on the plains is the village. Eranna was a patient man.. like most my friends I'd met during my earlier trips. He would wait until I finished shooting, made sure I took the safest possible paths, answered my questions.. 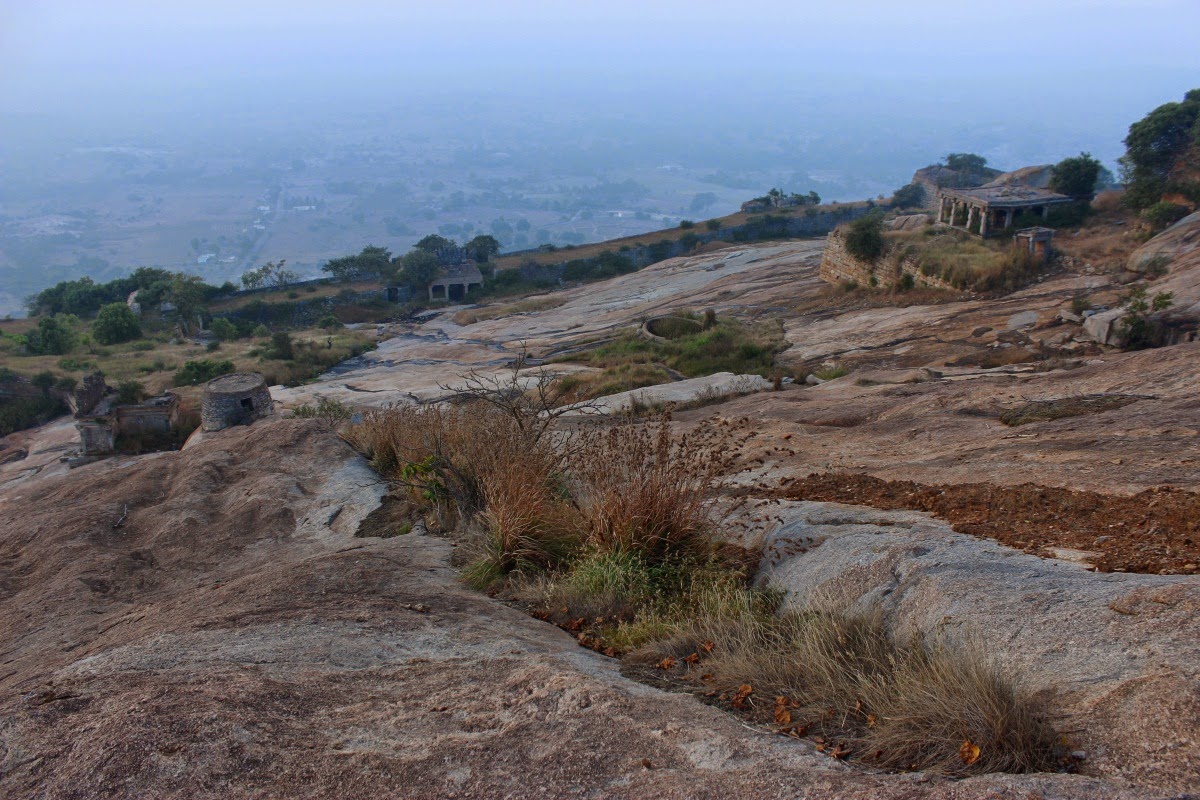 One of the walls had a row of holes (plugged with iron stubs) ran along the base of the wall. Unlike earlier fort walls, this wall is built of rough cut stones bonded with mortar. Probably a row of iron spikes marked the wall's base and also held the stones in place during construction. 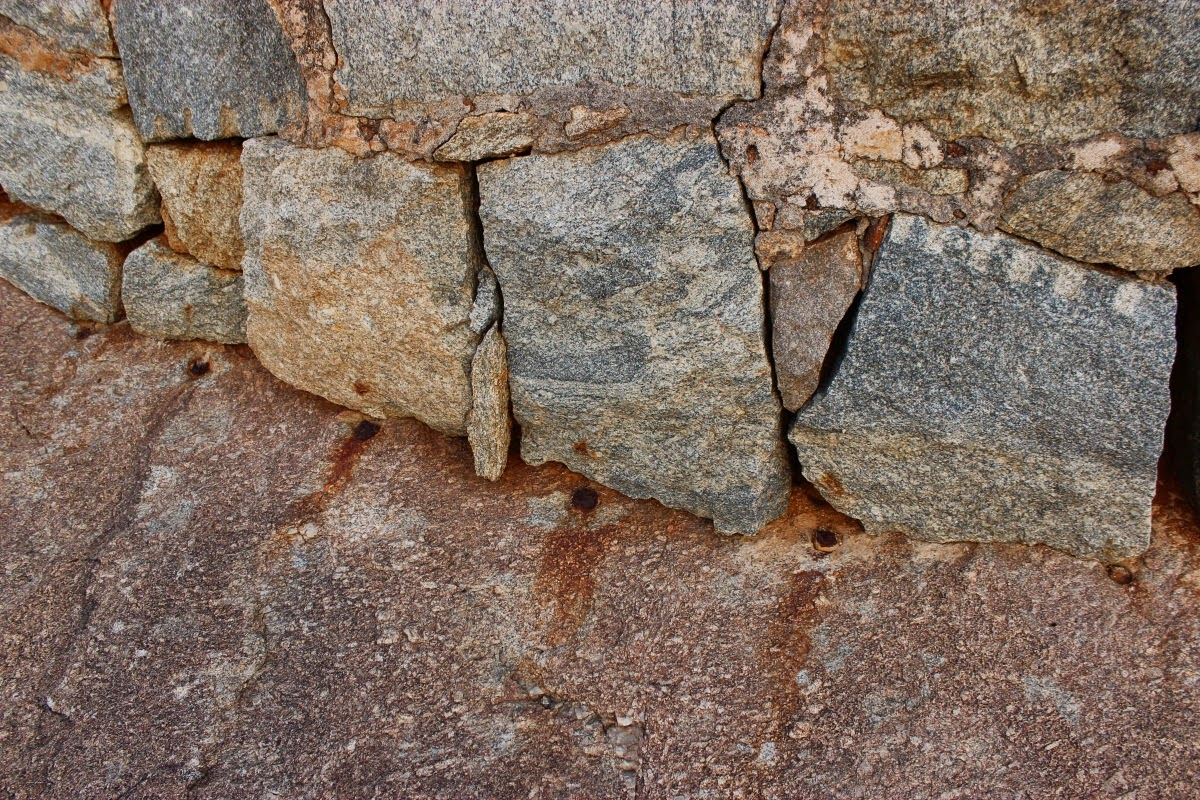 In through another gateway, the final climb lies ahead. From here its hard to guess the way up.. if enemy forces ever made to this point they would have to spend some time to figure out the way ahead. 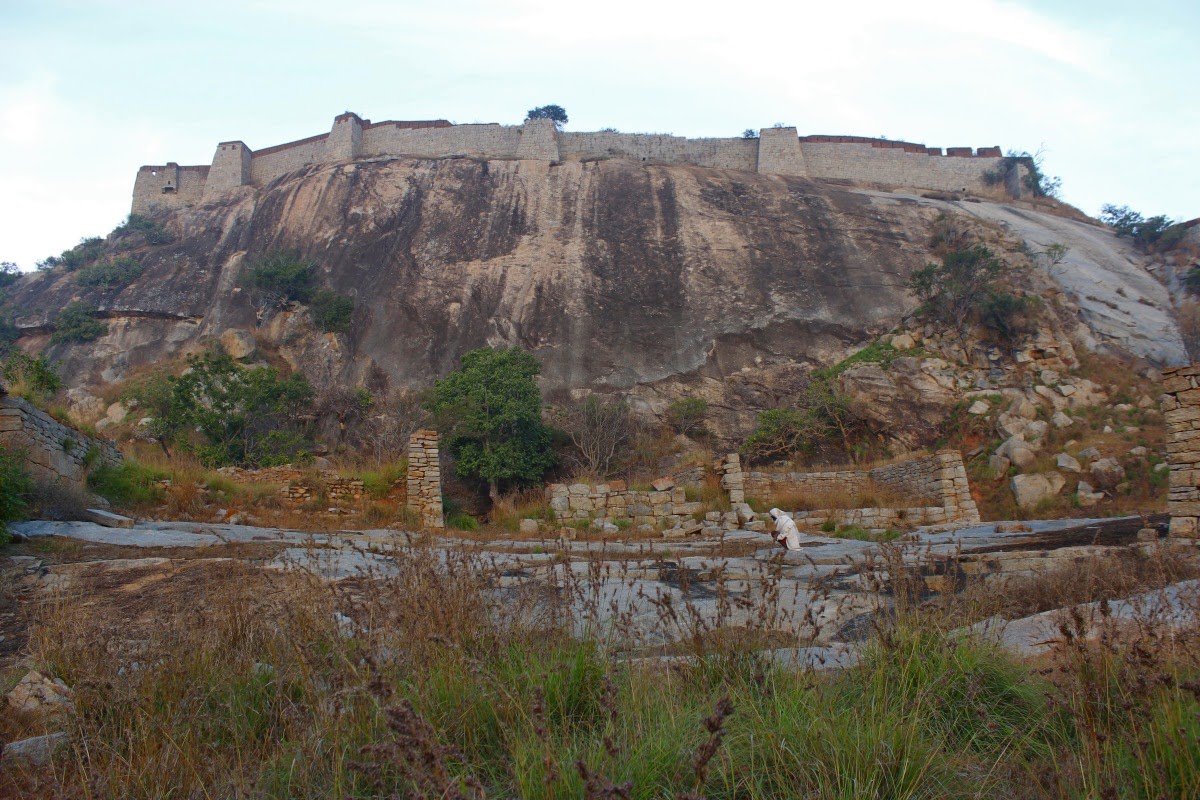