Stairway to the summit. Eranna is getting colder as we climb higher.. but his enthusiasm is firm. This stairway is really steep, steps are short, had to place my feet side diagonally. 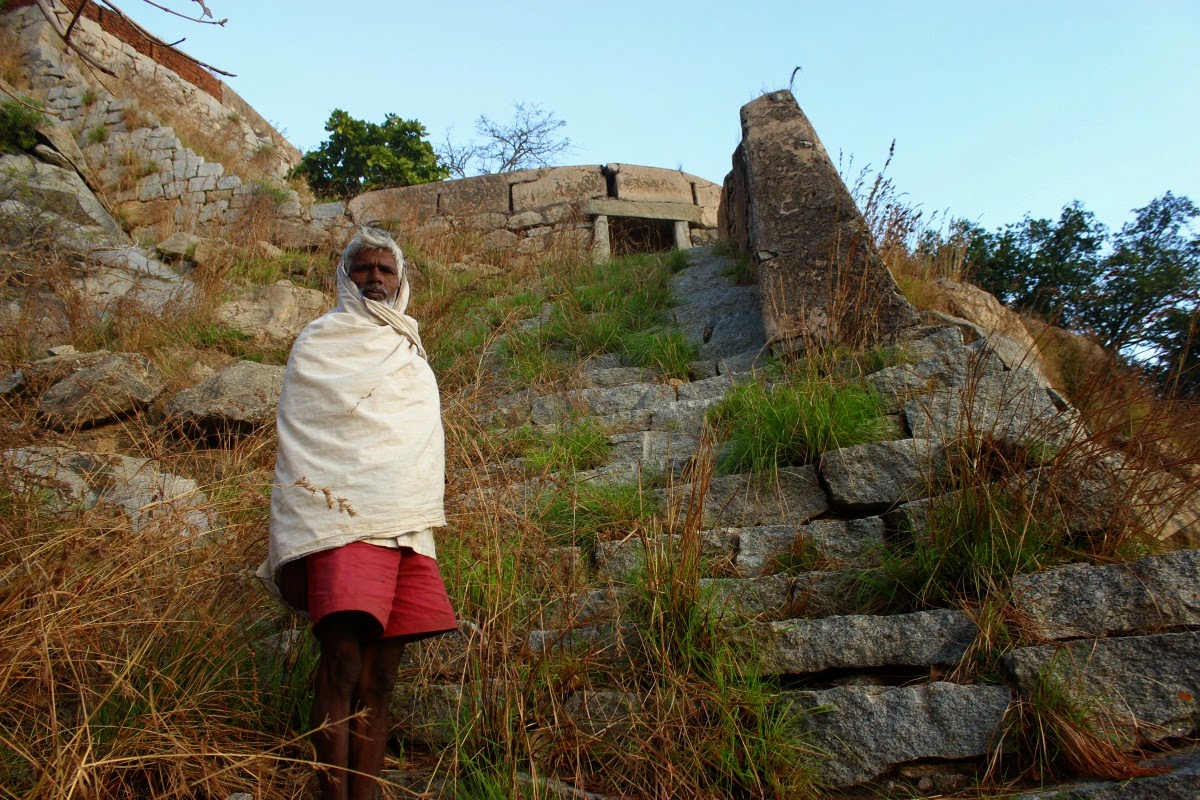 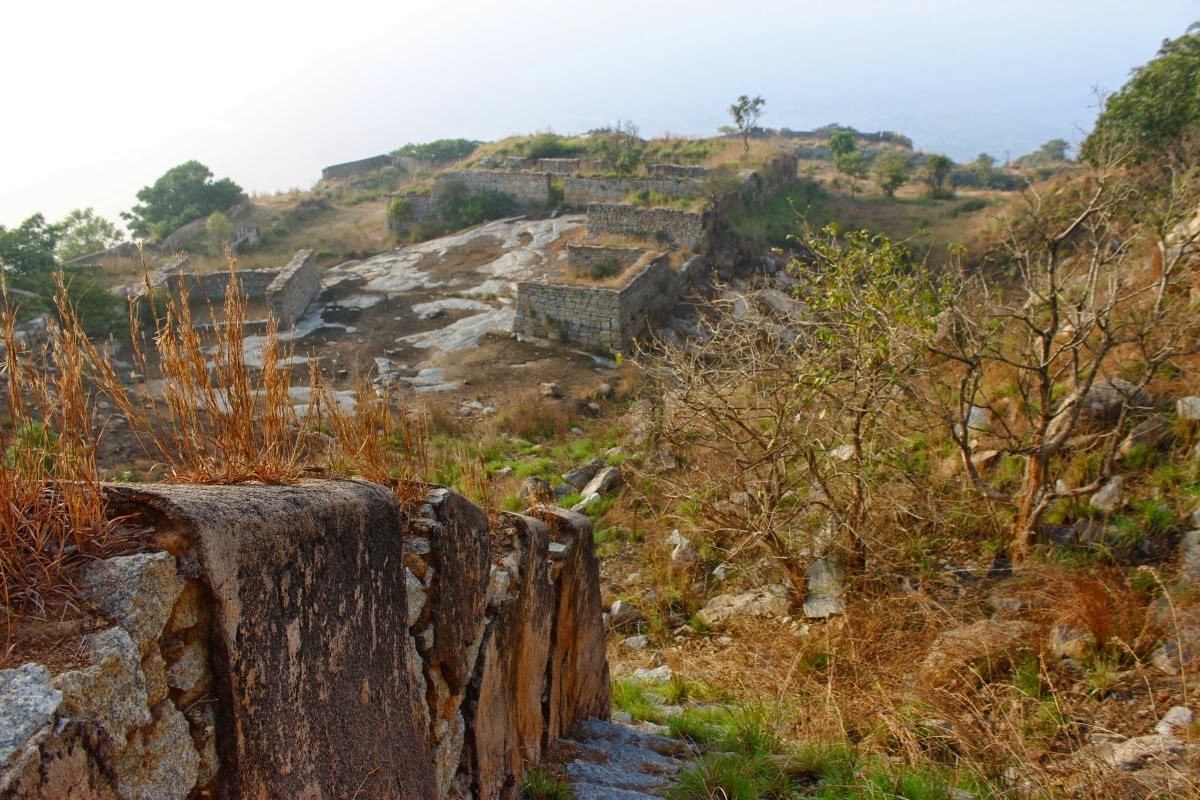 Another flight of steps, one more gateway and we'll be reaching the innermost part of this fort. 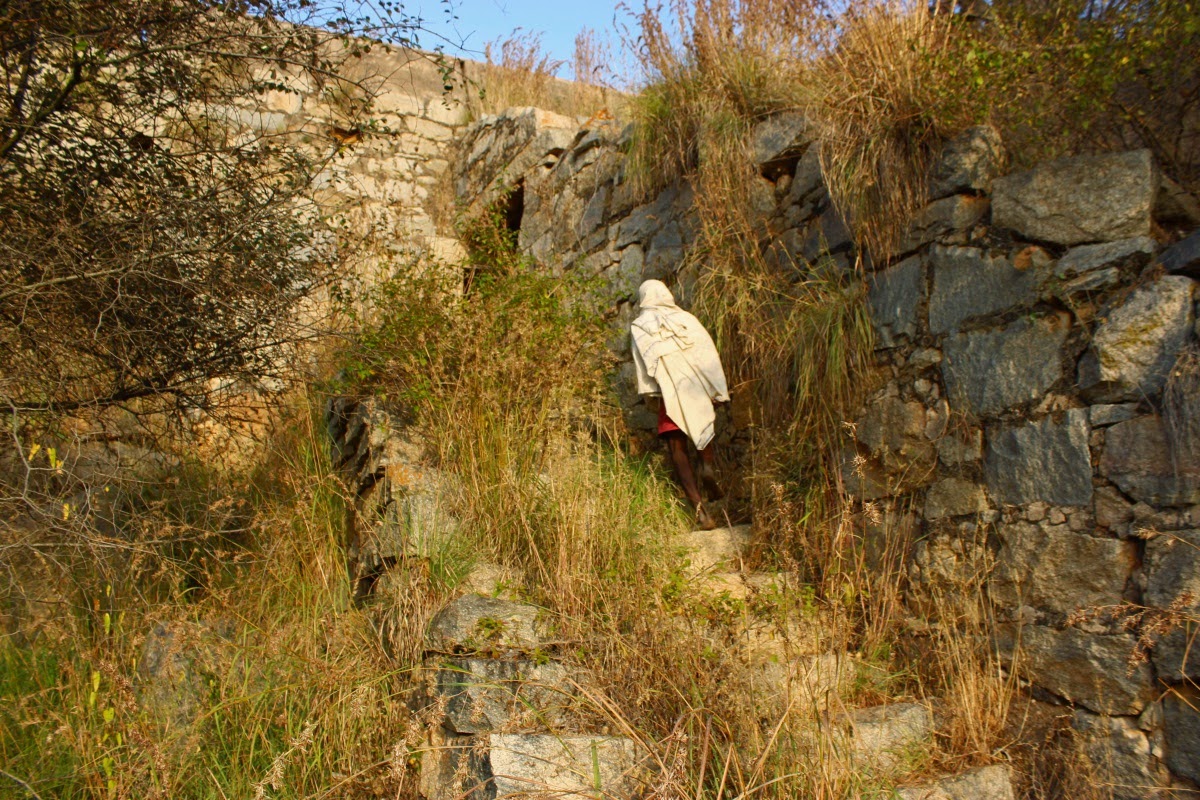 The innermost gateway; the brick portion of the wall is most probably added during Tipu's rule. Similar brick-mortar toppings can be seen at many forts such as Devanahalli, Nandidurga, Savandurga, and many more. 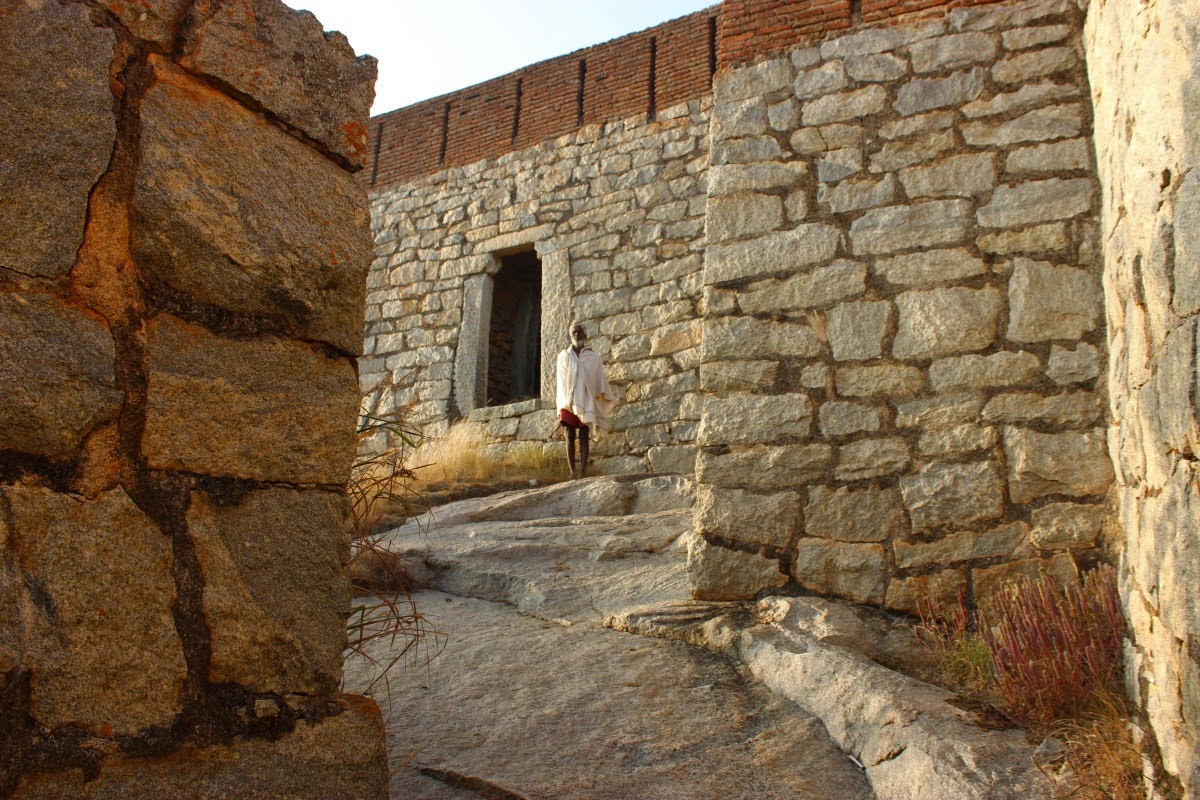 The zigzag path to the doorway. Love the color combination of the wall 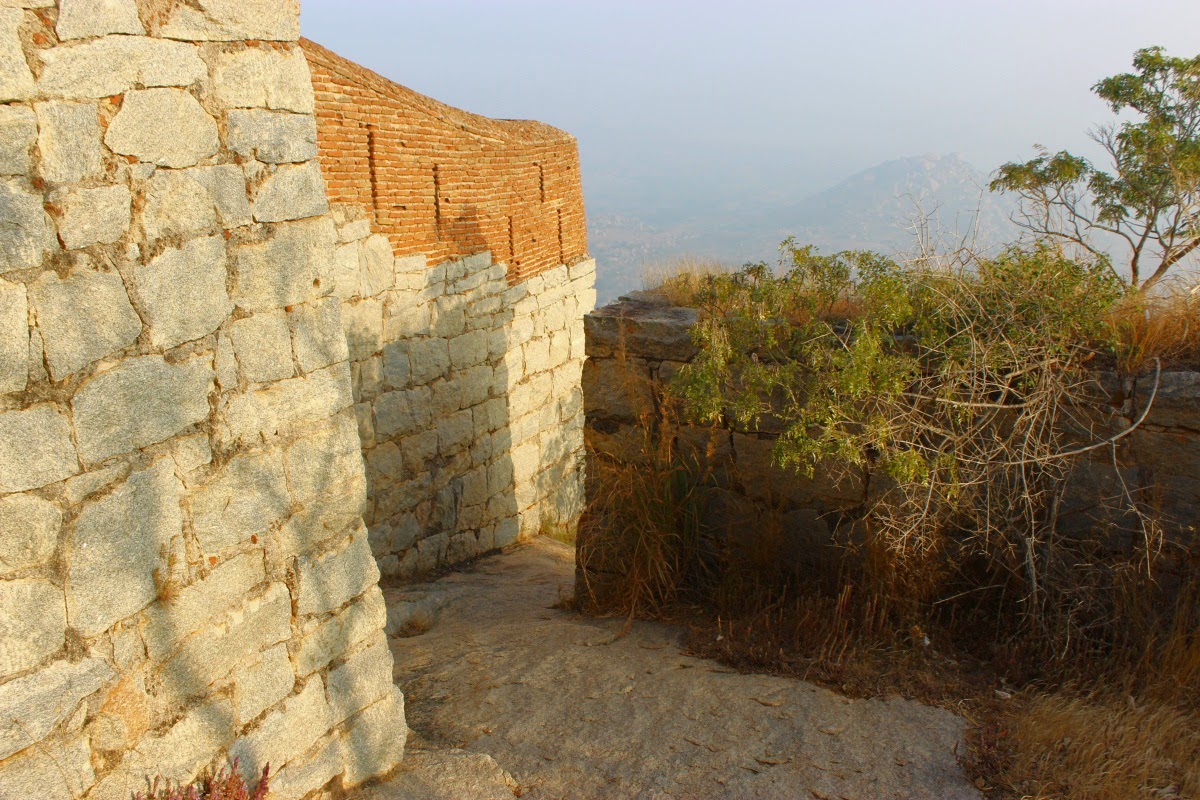 A very tight entrance.. when under watch, its almost impossible to enter or leave without being  noticed. 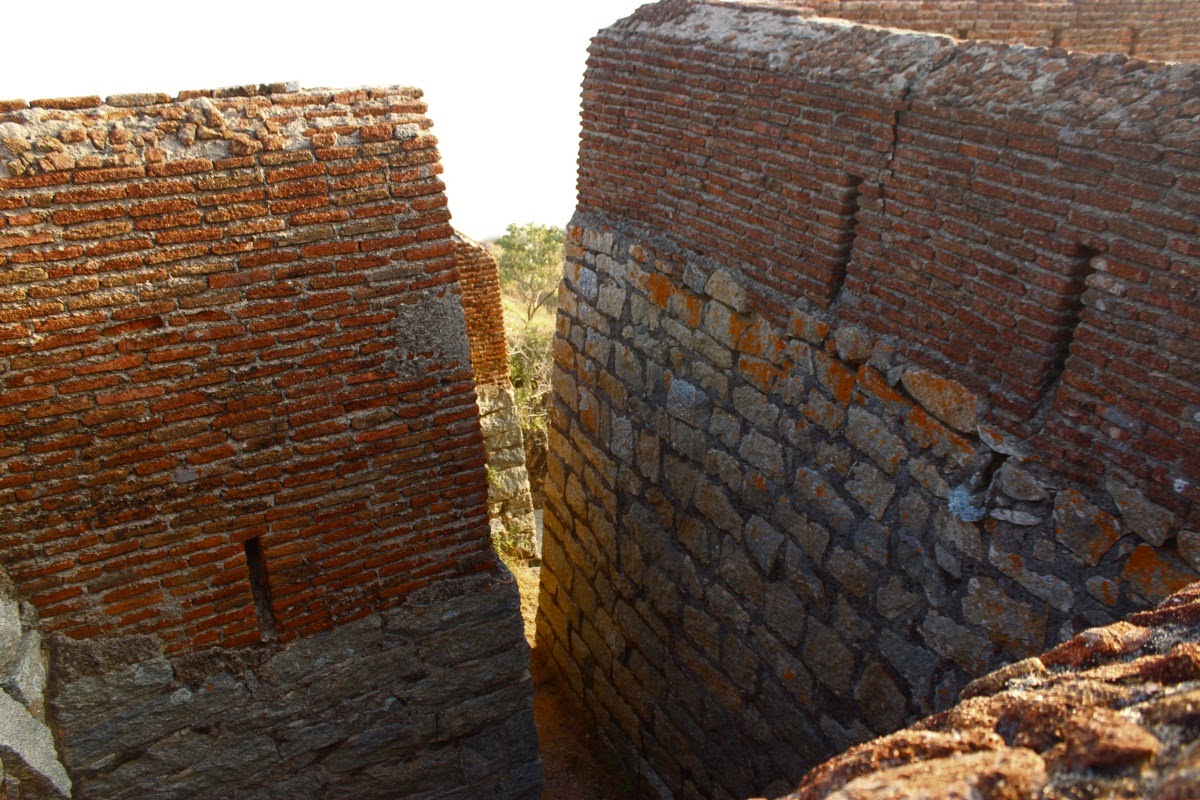 This is core and the highest part of Channarayanadurga. A shoulder ran all along the walls and beyond the walls are steep faces, hard to scale them. 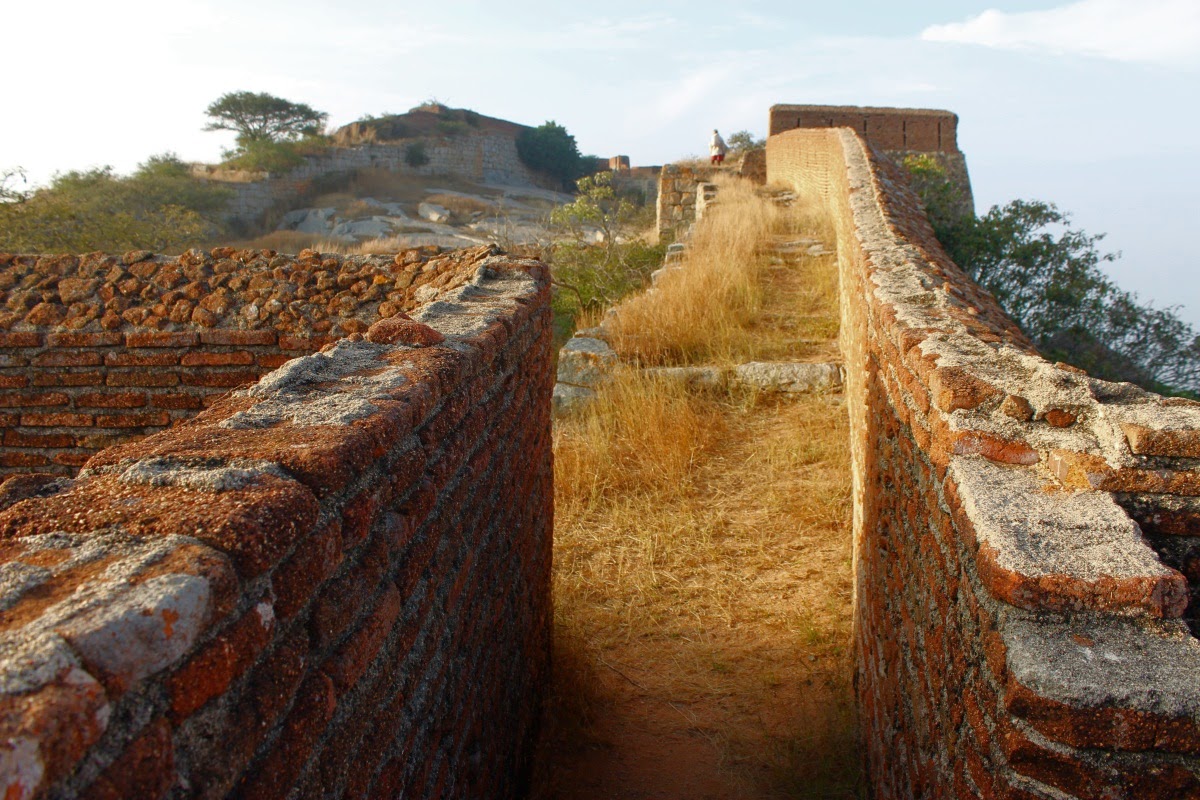 Lot of stone has been hacked away to level the floor, perhaps the same stones were used for constructing the rampart walls. This level gave a commanding view of the surrounding plains and hills. Madhugiri is visible clearly from here but not in this hazy condition, Surely a signalling system existed between the network of forts consisting of Channarayanadurga, Madhugiri, Midigeshi, Madaksira, Gudi Bande, Bhasmangi, Ratnagiri, Pavagaada and few other forts I'm not aware of. 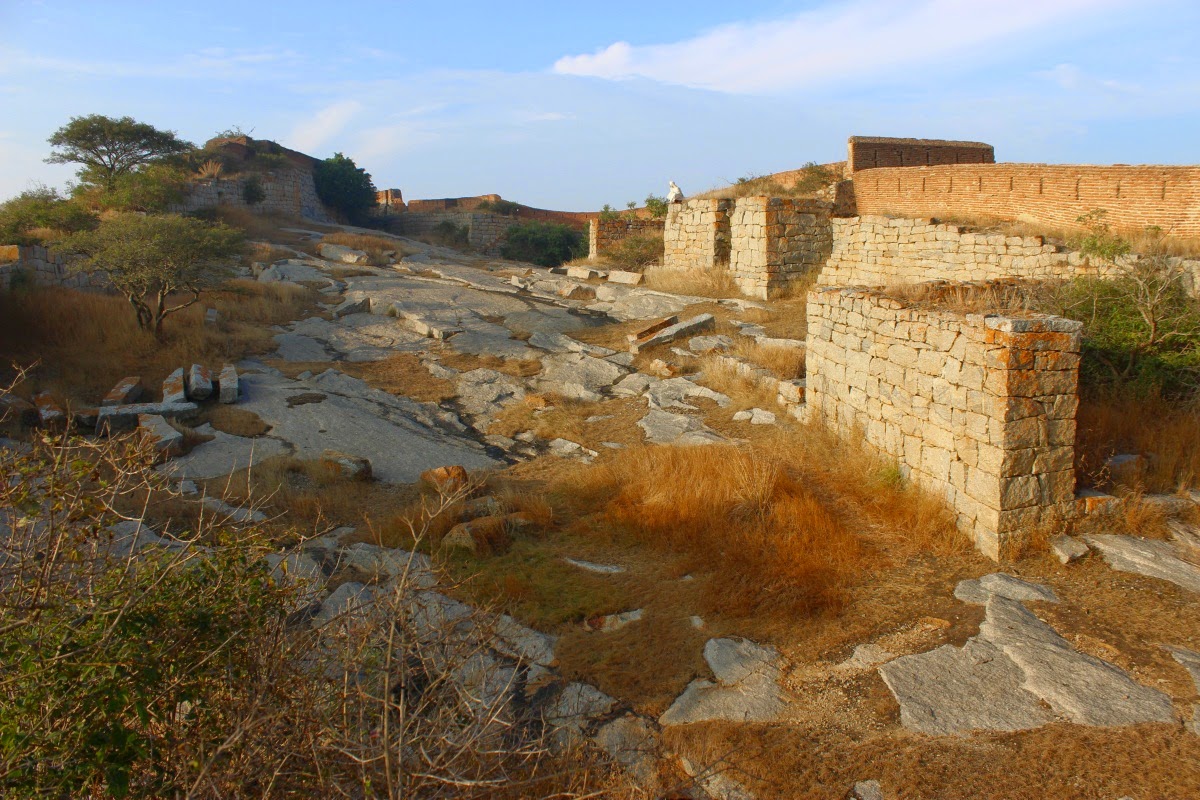 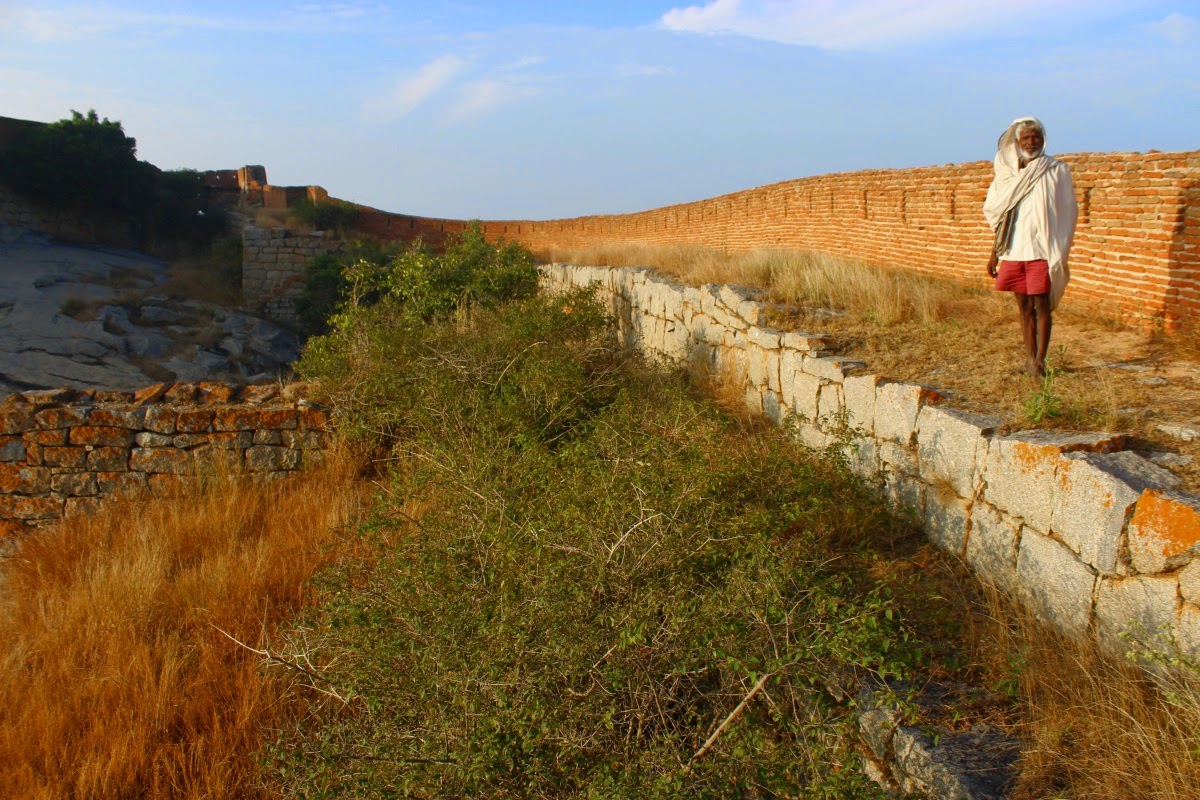 A bend in the wall and we are the narrowest pert of the summit. Actually the walls converge.. like in a V. This is the part which can be seen from the village. 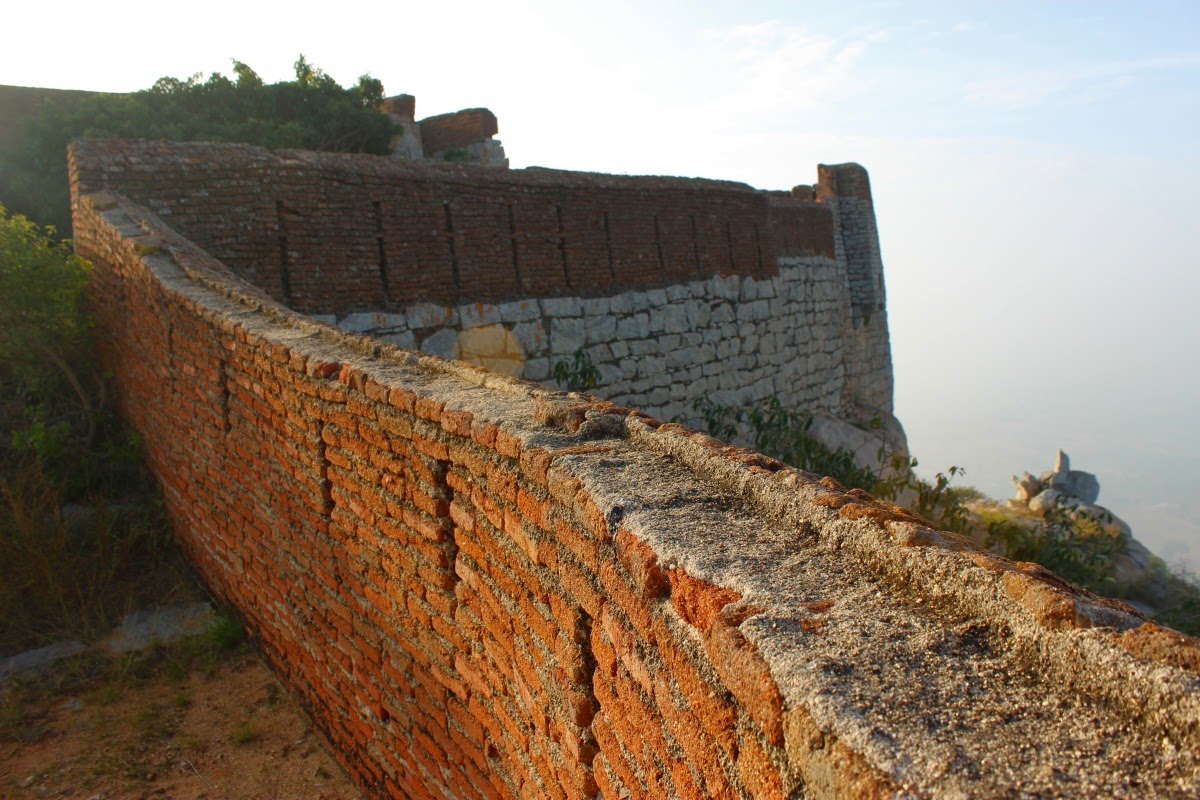 The western wall, Close look at the wall; sloped top runs off rain water, brick and mortar stand the test of time. This mortar will be a mix of sand, lime, wheat flour, and jaggery. I'm trying to imagine the time of construction... how they transported material, how they stored them, how they were moved from the base to hill top,.. did a human chain work like an escalator? Did they ever leave a painting of the construction site? 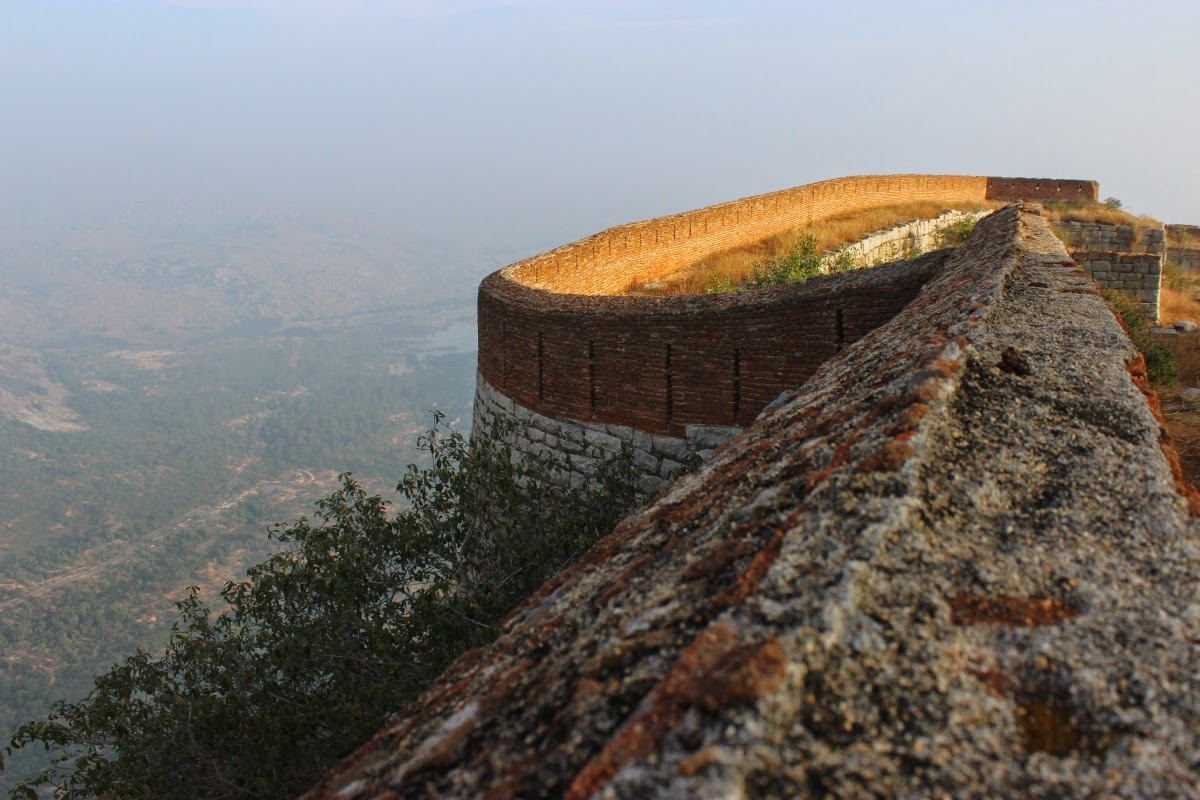 Armed soldiers would be scanning the plains and slopes. Did they work in shifts or would they be stationed here for weeks/months? Were soldiers/officers paid salaries? Were they allowed to take leave? 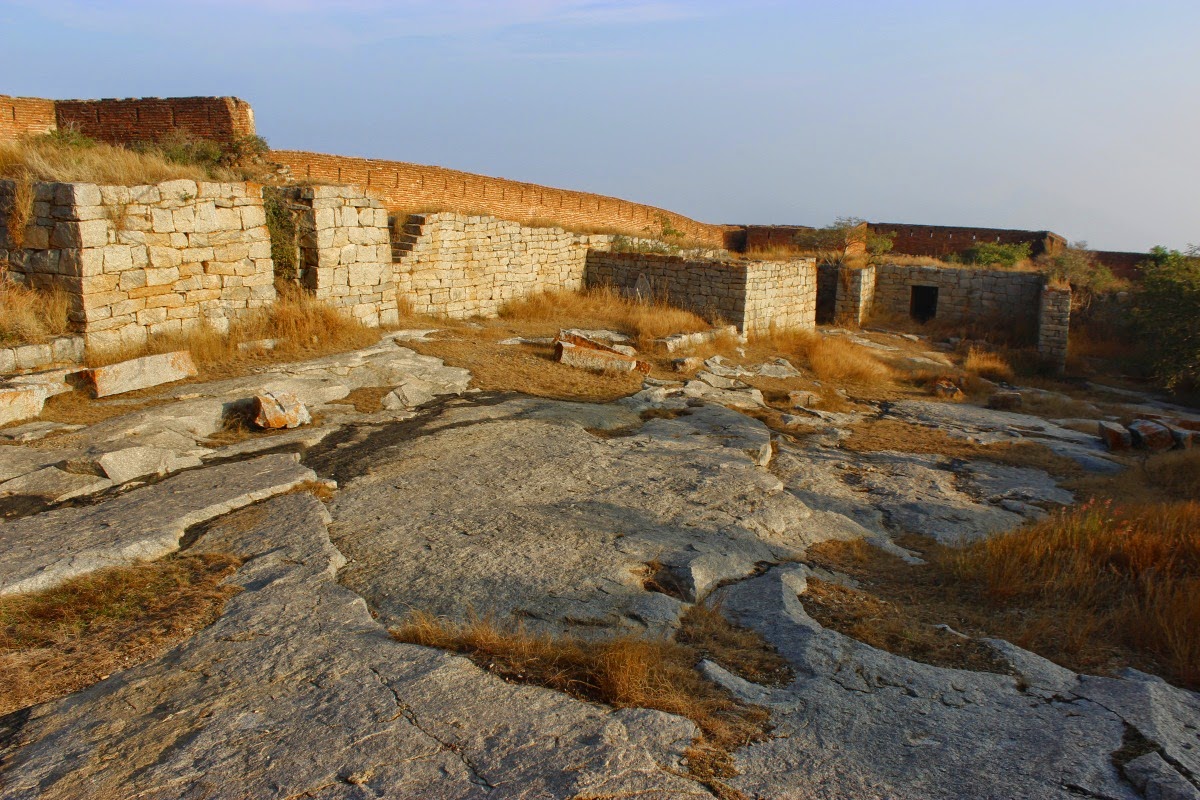 View through the gateway; Eranna stand at the stairway top. 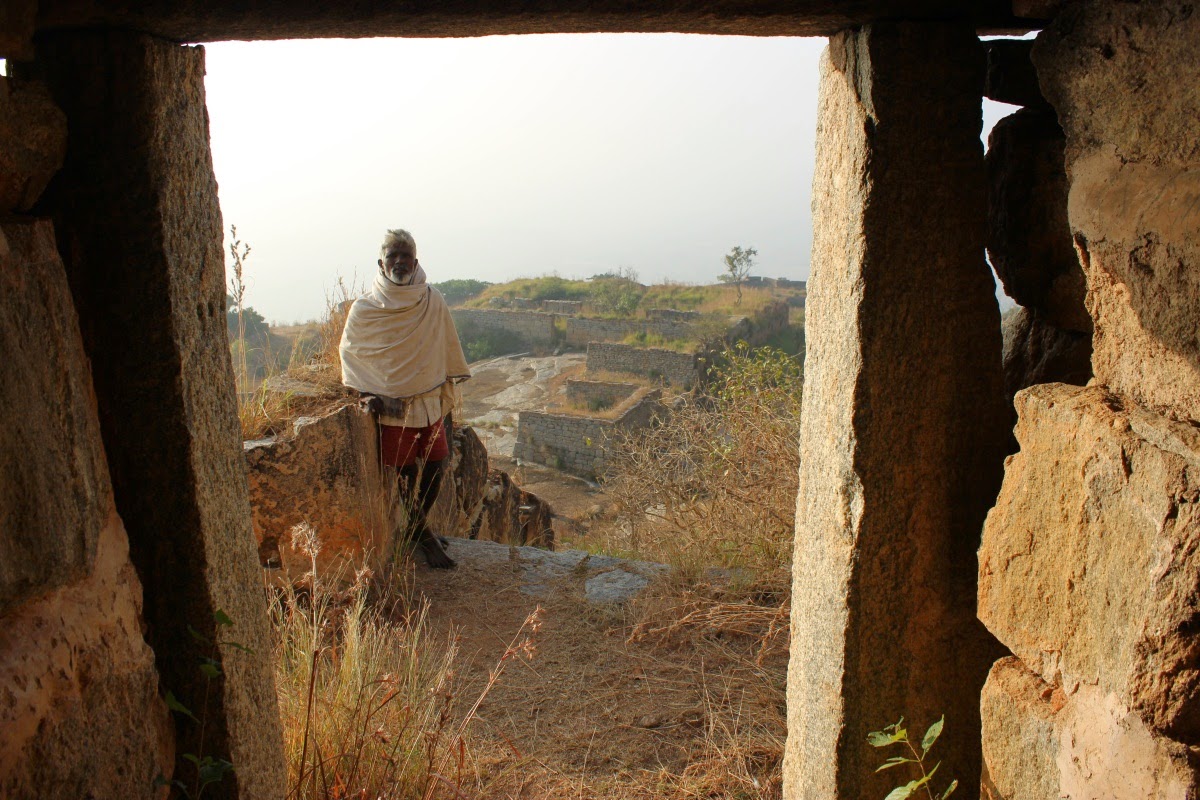 Time to leave.. we descended one level and looked up at the eastern wall and bastions. Bastions hill tops, particularly the ones on edges  are usually sharp cornered. I think its easier to built square bastions than round bastions. 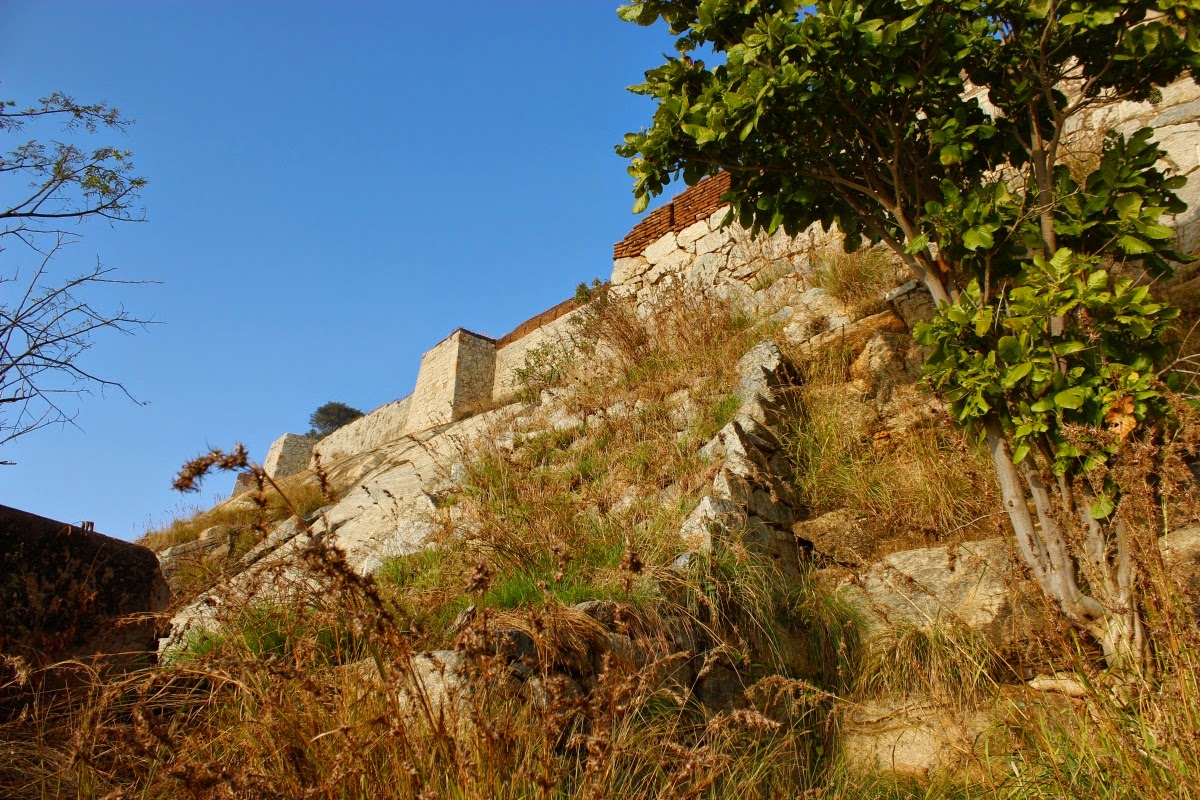 We pass through another gateway.. wonder how old these walls are. 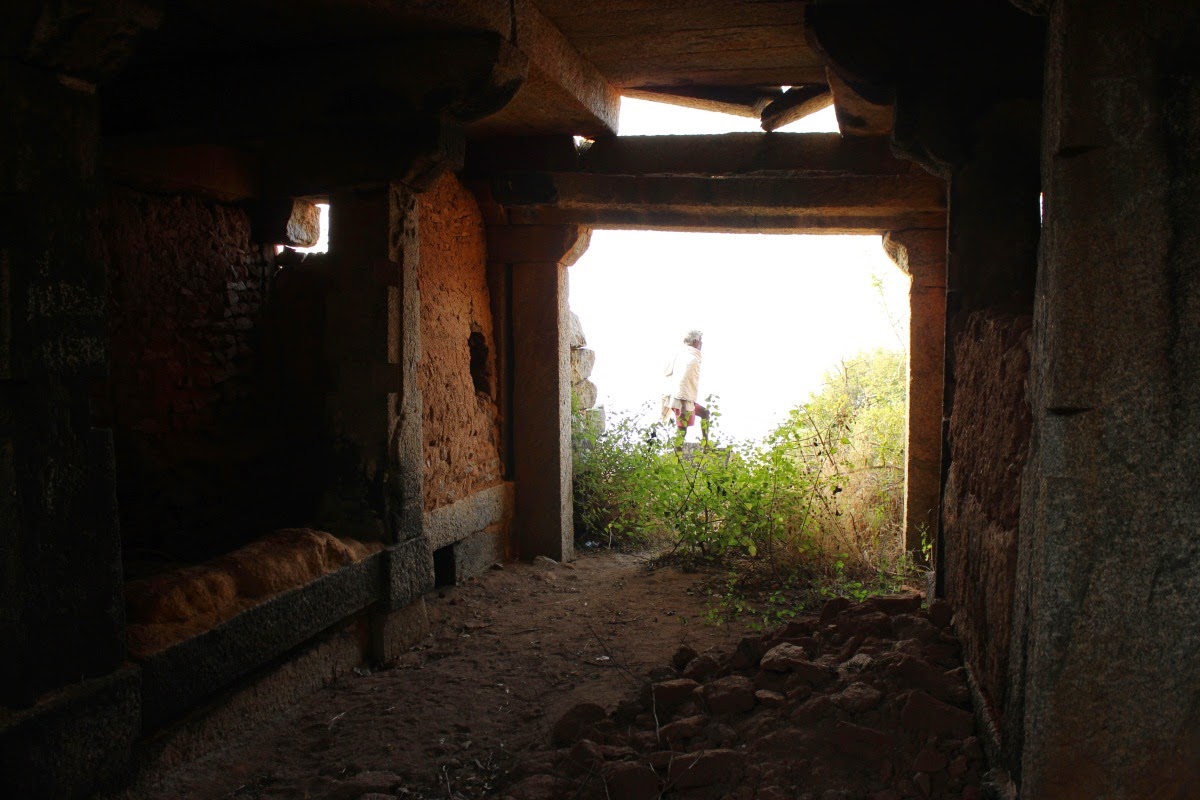 This wall is part of the structure which might have been living quarters for military officers. Remember seeing a similar wall at Madhugiri too. When builders had the technolofy to built flat surfaced walls.. why are these blocks sticking out? Is this a wall scaling training wall? 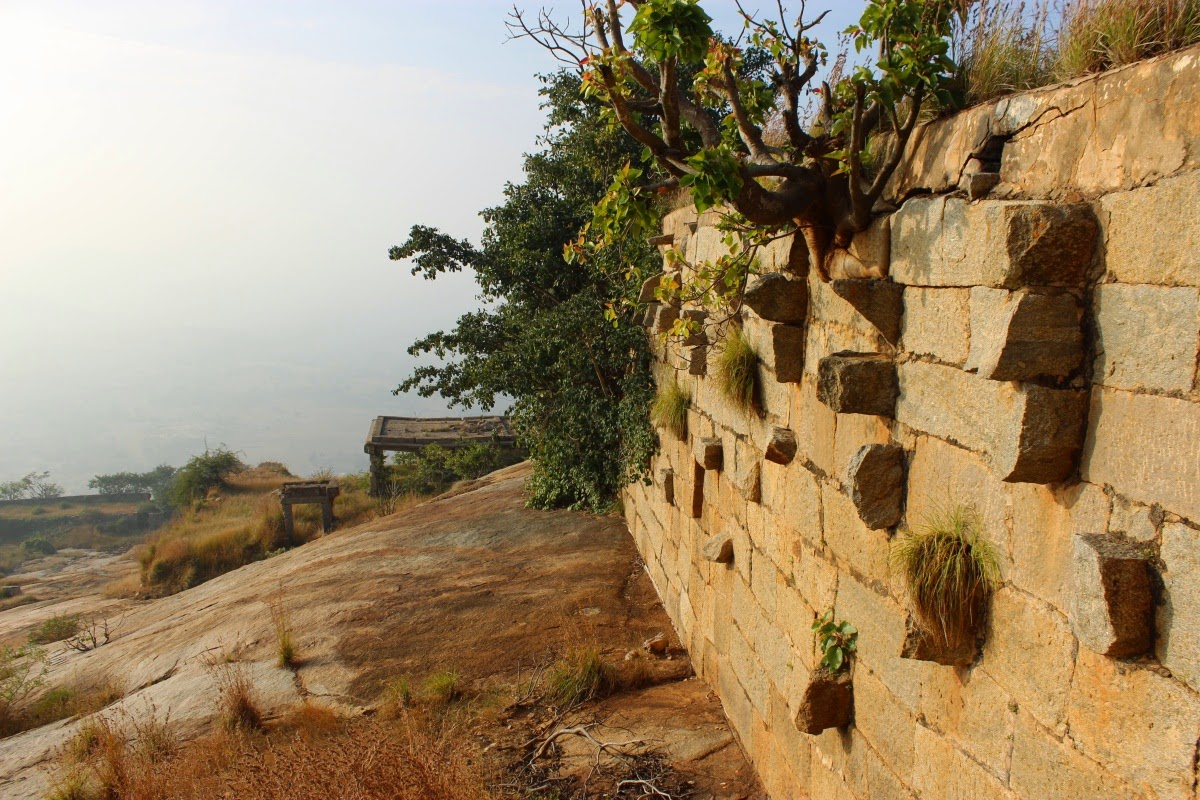 Eranna takes a break. Rock steps make climbing easy in wet weather. We head towards the temple.. an incomplete structure. The presence of a gateway is a clear indication of a wall around the temple. For some reason it remained incomplete. 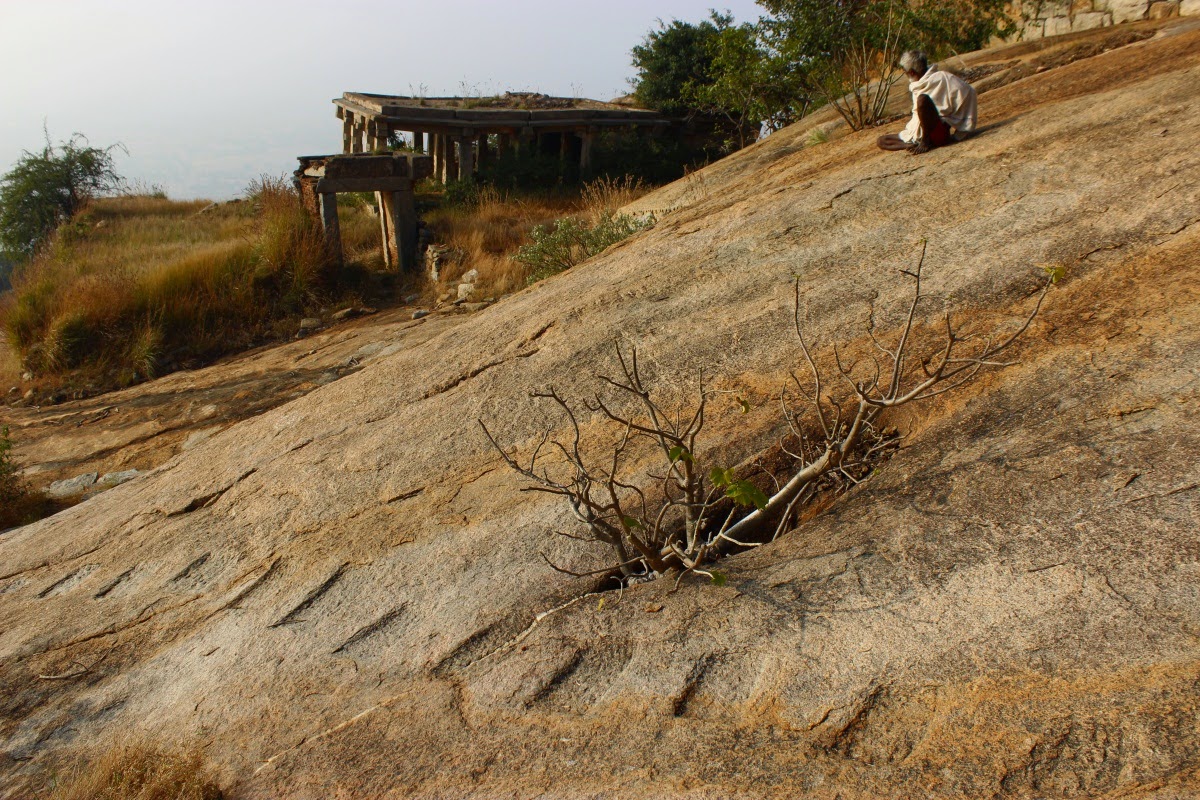 The temple architecture seems like Vijayanagara style but it may not have been built during that period. Probably post Vijayanara empire period builders adopted that style.. a simpler version. 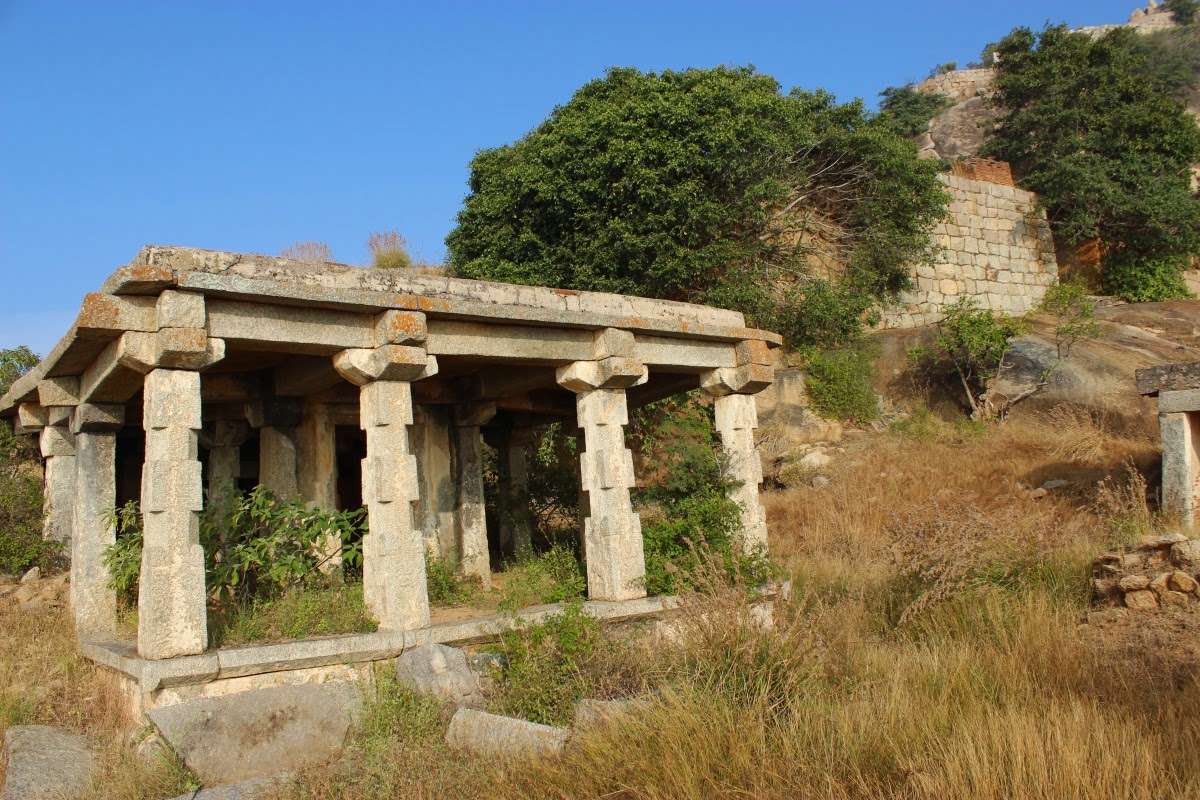 View from the temple.. the summit crowned by bastions and rampart walls. Eranna suggested me to take this shot. 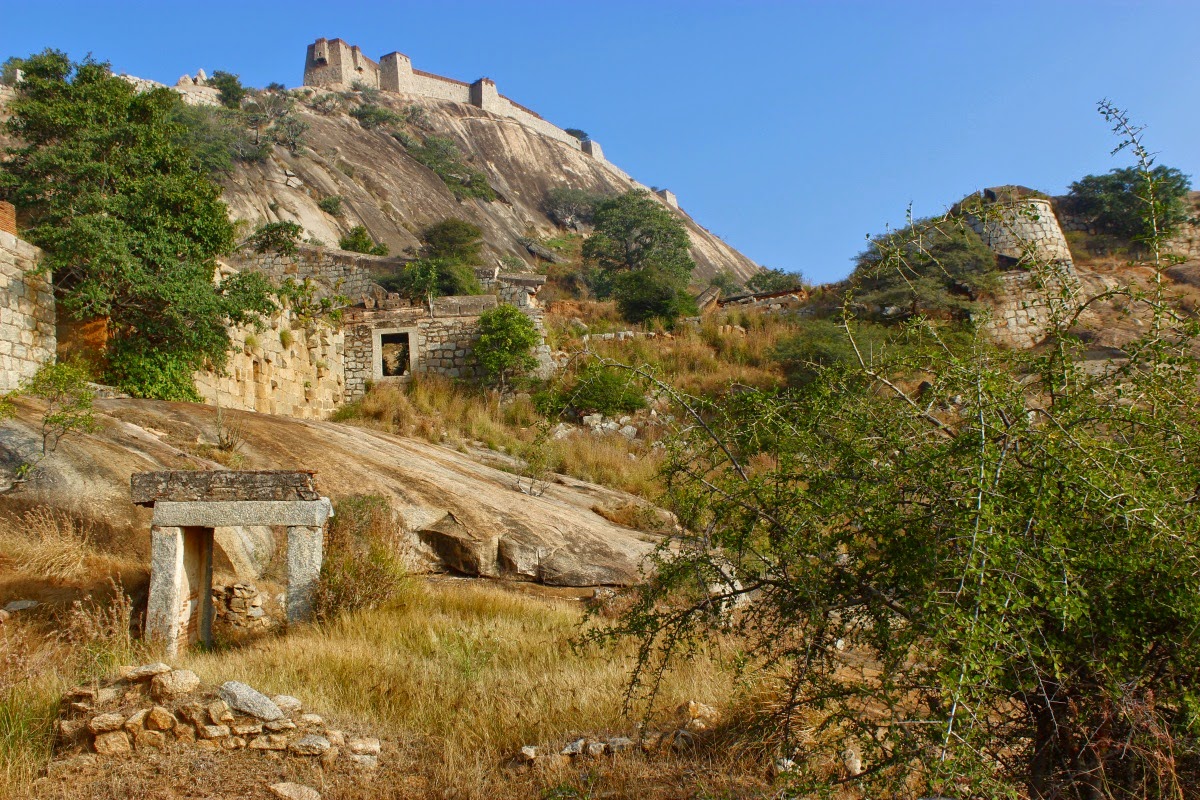 An ancient shelter probably a sentry post during the fort's hey days. The water body seen below is the village's source of water. 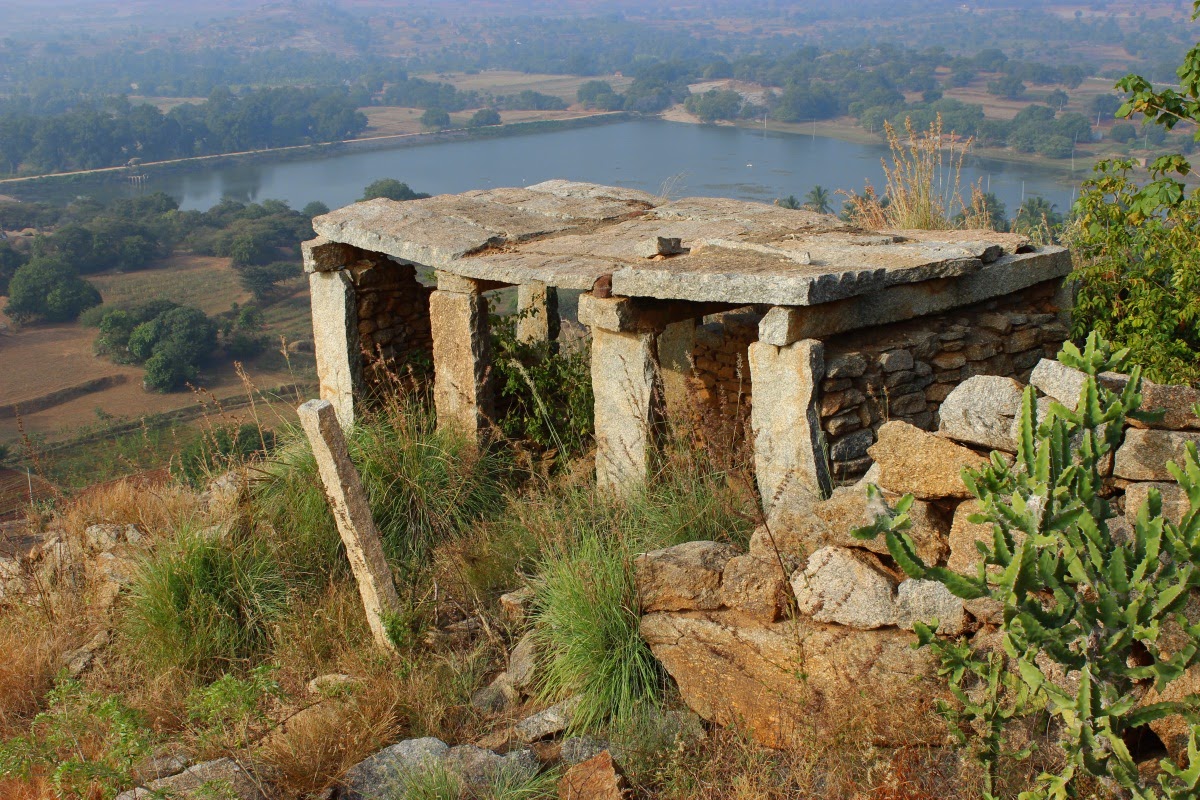 Back at the village, Eranna takes me to his house. He's a family man with two daughters and a son. I thank for his time and patience. Really a good way to start a day :) We drove out of the village, found a peaceful spot next to the road for a break. Thanks to Manjula, my host at Tumkur we had home made idli-chutney for breakfast. Next on the list was Ratnagiri fort, its just Karnataka-Andhra border.. so we will be driving about 6 kilometers into Andhra.